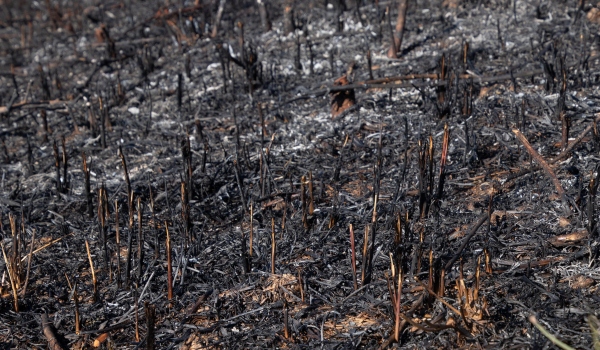 To tackle the ongoing disaster of fires and haze that harm human health and the environment, since 2014 the Indonesian government has strictly banned the use of fire to clear peatland areas for agriculture.

The clearing of forests and peatlands for oil palm and timber plantations is often the cause of large forest and land fires.

Our research found that the policy, called “zero burning”, is hurting smallholder farmers. They have used controlled burning as a traditional practice and tend a variety of food crops such as rice and corn in non-peat areas.

The ban on the use of fire for land clearing has raised the costs to prepare their land for planting and to keep it pest-free.

A degree of flexibility is needed to help farmers survive and prevent them from abandoning their lands due to high farming costs.

I carried out a research with a team from The Center for International Forestry Research (CIFOR) in collaboration with the Forestry and Environment Research Institute in Palembang and the University of Lancang Kuning in Pekanbaru. Our aim was to learn how the zero-burning policy affects farming practices and livelihoods of the community.

We discovered that the farmers found it difficult to follow the government’s alternative of preparing land without burning. They have to clear the land manually, using machetes or sickles, and let the grass and tree debris decompose. This takes longer than burning – one to two months as compared to only several days by fire – and costs more for manpower.

This method also brings pests and diseases from the pile of decomposing wood, leaves and grass, thus threatening farmers’ crops.

Farmers from villages in Indragiri Hilir told us coconut beetles attacked their coconut plants since the neighbouring plantation companies were using this technique on their plantation areas.

Without ashes from burning, farmers need to add dolomite to improve soil fertility. This leads to higher production costs as it takes about two tonnes of dolomite per hectare to get good results.

Some key informants said a number of land owners had decided to abandon their farms. Their harvest could not compensate for the high production cost of land preparation.

The abandoned lands create a higher risk of wild fires during the dry season due to the build-up of biomass from the bush.

The government banned peatland burning because of the difficulty of controlling fire in that ecosystem. Peatlands are made of decomposing roots of trees that can reach up to tens of metres below the ground.

Oil palm growers often drain peatlands so they can grow their crops on it. Burning drained peat to prepare the land significantly increases greenhouse gas emissions, as it will continue to smoulder and release haze for a long time.

But even though the ban on the use of fire for land clearing was specified for peatland, according to the regulation on peatland ecosystem protection and management and its revision, the enforcement of the zero-burning policy applied not only to peatland but to practically all agricultural land in the region.

The government has created the Forest and Land Fire Task Force, or Satuan Kebakaran Hutan dan Lahan (SATKARHUTLA), recruited from various agencies from the central and regional government and the local community, and involved the police and military to patrol the fields to prevent communities from burning their land. They also extinguish forest and land fires and even arrest and prosecute the violators.

The policy has made farmers too fearful to burn their lands, even though the use of fire in agricultural land clearing has been a common practice in their farming system.

Having seen citizens being arrested for burning farmlands, half of the surveyed households had stopped doing so.

But hundreds of other farmers in the surveyed areas were still practising burning for their farming activities. These farmers have long done this and have yet to find better ways to prepare their land. They are mostly doing it in secret. But some do ask for permission from village authorities prior to burning, which creates a dilemma for these authorities.

There are also people who are paid to burn land to open new land for plantations or to sell the burnt land to plantation investors. These are opportunists who are seeking short-term profit from burning land.

The zero-burning policy on peatlands, while effective in reducing forest and land fires, may in the long run harm the local agriculture industry.

There is a need for flexibility in implementing the policy on the ground. Genuine farmers should be allowed to implement controlled land burning. Traditional community wisdom makes it possible to apply the technique with the guidance of government officials in the field.

It is important that officers understand and are able to distinguish between opportunistic groups and the genuine farmers whose livelihoods really depend on their farming activities.

It will not be an easy task for the government to change the command and control approach of SATKARHUTLA officers in the field. But it’s important that they are able to not only take firm action against the burning opportunists, but also help improve the capacity of genuine farmers to implement safe burning practices.