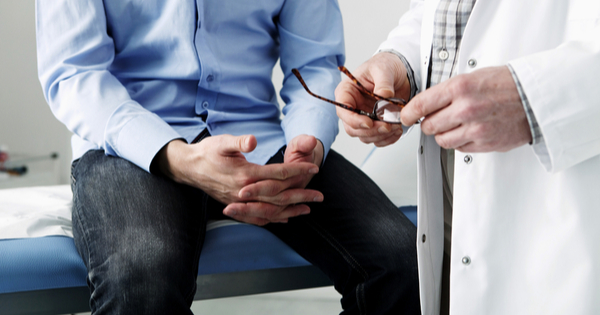 Around the world, many countries observe Prostate Cancer Awareness Month every September. Unlike other cancers, there’s a great need for countries and healthcare organizations to raise awareness of this disease.

It’s a condition rarely talked about among families and friends. The stigma and fear of rectal exams keeps many men who need to be checked avoiding the urologist’s office at all costs.

Many readers might be thinking to themselves, “I don’t need to know about this. I’m relatively young and prostate cancer is a disease that affects old men, and besides — I couldn’t ever tell anyone I had a rectal exam.”

But it’s precisely this kind of thinking that can turn an often-curable cancer into a deadly one.

A Leading Cause of Death for Men

It’s also the most common non-cutaneous cancer detected among Americans. More than 160,000 new cases are diagnosed per year, estimates the ACS.

Worldwide, prostate cancer is also the second most diagnosed cancer in men. New cases are on the rise in all populations across the European continent.

Interestingly, the number of new cases of prostate cancer is generally higher in areas with higher socioeconomic development levels. This is potentially related to the diet and eating habits of persons in those continents.

For instance, North America and Northern Europe have the highest rates, with fewer cases in Southern Europe and Latin America. The lowest rates are in Asia and Africa.

WHAT IS THE PROSTATE?The prostate is an exclusively male glandular organ, located between the urethra and the bladder. The word prostate comes from the Greek word meaning “before” or “prior to.” The existence of the prostate wasn’t known until the 16th century, when a Venetian doctor named Niccolo Massa detailed the first description of the organ.

The prostate has a volume of 20 cubic centimeters (about the size of a walnut) and produces part of the semen, which contains among other things, spermatozoids, zinc, glycoproteins, and a substance essential for the diagnosis of prostate cancer: prostate-specific antigen.

With respect to diet and eating habits, some scientific studies suggest the total intake of fats, especially animal fat and red meat in particular, is related to an increase in cases of prostate cancer. On the other hand, eating grains, nuts, and oilseeds is related to a reduction.

Regardless of a person’s country of origin, however, the risk of developing the cancer is multiplied for men who migrate to countries with high-fat diets and high consumption of red meat.

Genetics could also be a specific risk factor. For example, research suggests men of African descent have a higher likelihood of developing prostate cancer. Similarly, family history of prostate cancer is considered a big risk factor.

The importance of screening early

Prostate cancer is often asymptomatic, meaning it shows no symptoms. So, many people put off their screenings. And when they do get a diagnosis, it can sometimes be too late.

The thing is, prostate cancer most often spreads to the lymph nodes, lungs, and the bones. When this happens, it means the cancer is now at an advanced stage.

This is why all men should have the necessary screenings beginning at age 50. If a person presents any of the abovementioned risk factors, it’s even recommended that they begin annual exams beginning at the 45-year mark.

In order to get screened, you need to see a board-certified urologist, who will then request a blood test called prostate-specific antigen.

Now comes the admittedly uncomfortable, and for some people, even taboo part of the process: the infamous rectal examination.

It’s admittedly intrusive, like most gynecological exams are for women. However, there’s the added issue of the fragility of masculinity or “machismo” that many men display and the mental hurdle they have to overcome to allow themselves to be examined.

Nevertheless, it’s a necessary test that’s an integral part of the diagnosis of prostate cancer.

Both the antigen test and exam should be performed annually, in most cases. I can tell you that my patients are often quite anxious and feel vulnerable about this part of their visit. They even crack jokes to ease their own tensions.

As for me, I try to get my patients to relax by first explaining to them the process in detail and answering all their questions. I let them know I perform hundreds of exams annually.

Perhaps most importantly, I make sure they understand that, as of today, the rectal exam can’t be replaced by any other test and is thus a critical part of their visit with me.

What happens after your results come back

Your urologist will discuss your results with you, go through a detailed clinical history, examine you, and perform a digital rectal examination.

If necessary, they may perform some complementary tests and make the decision whether to wait and watch carefully, or go ahead and initiate treatment. It’s a decision that has to be made on a case-by-case basis.

Very recently, I had the unpleasant experience of diagnosing and treating the father of one of my best friends who had prostate cancer. He was a doctor himself, a stubborn and proud man.

Unfortunately, he waited too long to be effectively treated. And in his case, it was terminal.

This is why I want to point out that prostate cancer is a disease that’s close to everyone. It can affect the people we know and deeply care for, even if they’re medical professionals.

As I mentioned before, prostate cancer is a silent disease — hence the importance of regular screening.

In my 3 1/2 years practicing urology and my six years as a urology resident and general surgery resident (not including my years in medical school), I’ve seen many cases — a good number of which were completely curable from the outset thanks to early detection and the correct course of treatment.

I’ve also seen many advanced cases that were impossible to treat because the patient got a diagnosis too late, often due to a misguided, “macho” mindset.

So, if you have a friend, father, brother, or uncle over 50 or know someone who has a history of prostate cancer in their family, my advice is the following: Let them know that just one (albeit uncomfortable) exam a year is worth potentially decades more of living.

This year, encourage that person to go see their urologist. It just might save their life.