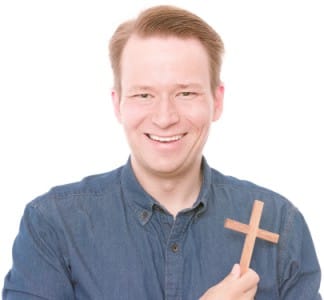 No offense to the man in the picture. I’m not saying he’s a terrorist, as per the title of this essay. He’s just a well-groomed guy holding a tiny wooden cross and smiling a friendly smile, which, in combination with the wooden cross is — I gotta say — a little creepy.

But when I saw it, it reminded me of something. And so I decided to use it, to help frame a subject I feel is important to discuss in the wake of this week’s terrorist massacre at the Tree of Life synagogue in Pittsburgh.

I realize that may seem odd: seeing a picture of a smiling Christian, from all appearances filled with love, and thinking it was relevant to the slaughter of eleven Jews in a worship service by someone who just perpetrated the worst single-day attack on Jews in American history.

But it is relevant. And it’s relevant in a way that we often fail to appreciate, let alone discuss, for fear of offending or seeming unkind, or appearing to analogize things that at first glance don’t seem analogous (at least to most).

Namely, that for every hate-besotted bigot, intent on destroying Jews physically, there are millions of mostly kind, evangelical Christians who feel filled with love, especially for the Jewish people they insist, but whose core theological premise leads them to conclude that Jews must stop being Jews if they wish to enter the kingdom of God. Ultimately, they believe that Judaism must be eradicated just as completely as is desired by neo-Nazis.

Oh sure, the human beings in question may be allowed to live, but the tradition from which they come, the faith of their families going back millennia, the relationship they have always had with God, must be altered and abolished. They must, in effect, dishonor their fathers and their mothers, in violation of one of God’s own commandments — lest they burn in a lake of fire for all eternity.

Because that is what a loving God does: burn people in scalding lava, forever.

And, they insist, it is love that necessitates their telling you this if you are Jewish, or anything but a born-again Christian, really.

At least that’s what they always told me when I was subjected to their testimonies of faith, and criticisms of mine, as a child.

So although telling someone to “go to hell” would have been understood — is understood — as offensive, telling that same person they are going to hell, even at the age of 11, is an expression of compassion, and I should have received it that way.

Make no mistake, this is terrorism of a spiritual type. And I know that for saying this there will be some who stop reading, offended at the suggestion that evangelical Christianity (at least as practiced by most who claim that moniker) is on par with hateful violence. But in the name of that “love” you claim you feel for me as a Jew — the love you insist your Bible commands of you, and especially since Jesus was Jewish — I beg that you read on. Because, if you don’t know (or more to the point care) what hurts me, your claims to love and compassion mean little, and indeed prove counterfeit.

A few stories to make the point.

First, some stories about hate.

In May of 1981, three members of the Ku Klux Klan were arrested en route to plant a bomb on the grounds of the Temple where I attended services as well as, at the time, a seventh grade Hebrew school class each weekend. Fortunately an FBI informant had helped them build the bomb (which was actually fake), and so their plot never materialized.

Years later, when I was actively involved in the campaigns against lifelong white supremacist and former Klan leader, David Duke, when he ran for the U.S. Senate and Governor of Louisiana, I was treated to regular death threats, many from the ranks of Duke’s more Nazified fans. These would include the standard fare of anti-Semitic slurs, as do the threats I receive still today, along with the hateful tweets sent to me by Reddit and 4chan incels with nothing much better to do.

And many of these, no doubt, are sent by people who at least fashion themselves Christians, however much their behavior might call into question the veracity of the designation.

But so too was I subjected to the kind of love mentioned above, which insisted that my soul was an empty vessel and that I would, upon my death, join all of my Jewish ancestors in Hell, in which place a spot was already being prepared for me because I hadn’t accepted Jesus as my personal savior.

In a public school.

I was being forced to attend assemblies in which members of Young Life — a Christian youth group — would stand up and testify about having been saved and how there was only one true path to God.

And again, this was in public school.

It was only when I walked out of one of those assemblies and threatened the principal with a lawsuit — something that, at the age of 12, I had no idea if I would actually be able to pull off — that the practice finally stopped.

For my act of apostasy however, I was regularly subjected to comments by teachers and administrators — authority figures — to the effect that I was “lost,” and needed Jesus in my life. Indeed, one teacher even graded me down on an 8th grade research paper on the issue of school prayer, calling it sacrilegious because the title I chose, “Our Father, Who Art in Homeroom,” was “hostile” to her faith, and “mocking” Scripture.

Later, in high school, I had a teacher who would say the same kinds of things to students, in class, in the halls, whenever he got the chance. This “educator” — really a basketball coach who had no business in a classroom whatsoever — would keep up the proselytizing until he too was threatened with legal action (for requiring anyone playing sports for the school to be members of Fellowship of Christian Athletes).

And without question, this coach, the teachers in middle school, the principal — all of them — would have insisted that not only were they not anti-Semites, despite the spiritual hostility they evinced towards Jews with their statements, but that they had a deep love and affection for the Jewish people. Oh and of course they love Israel, so…

Putting aside that many of us aren’t particularly fond of what the state of Israel does, and especially in our name, there is another problem with the pivot such folks make to that nation as proof of their Judeophile credentials. Namely, for most of them, their “love” of Israel is entirely opportunistic. They want Jews ingathered there because they think such a thing is necessary for the return of Jesus. And this is just an additional layer of awfulness.

After all, that “Christian Zionism” has, as its ultimate aim, the end of Judaism, either by mass conversion as the end times commence, or by the condemnation of those who refuse to see the error of their ways and repent, thereby casting off their faith, their families, their heritage — all of it.

Why should I see that goal — the end of Judaism, the extermination of the Jewish tradition and Judaism itself — as any less inherently offensive than the end of Jews as people, which was the self-professed goal of the Pittsburgh shooter?

If I were to tell Christians they had to renounce Jesus, and that my fervent desire was that all Christians would ultimately do so, the fact that I wouldn’t kill them for refusing probably wouldn’t make them feel much better. The mere suggestion that the Christian faith should go the way of the dinosaur would be marked as anti-Christian bigotry, an attack on people of faith. Forget the “war on Christmas,” that would be lambasted as a war on Christ himself!

And yet, literally tens of millions of evangelical Christians (especially the white ones) think the flipside of this about anyone who doesn’t believe as they believe, all the while trying to sell the idea that such a thing, coming from them, is said with affection.

But when you tell a child that he is going to hell, you are a terrorist.

You are a horrible person.

You are Fred Phelps without the track suit, megaphone, and gaudy posters.

Hell, at least the Phelps clan is honest. Their judgment is, by their own admission, rooted in hate and contempt. I somewhat prefer that to the pious claims of compassion and concern coming from the bowels of the Southern Baptist Convention.

You can call your religious supremacy and theological chauvinism “love” all you like.

Husbands who beat their wives are known to insist how much they love them too.

And they are lying.

And so are you.

If you really loved us, you would stop.