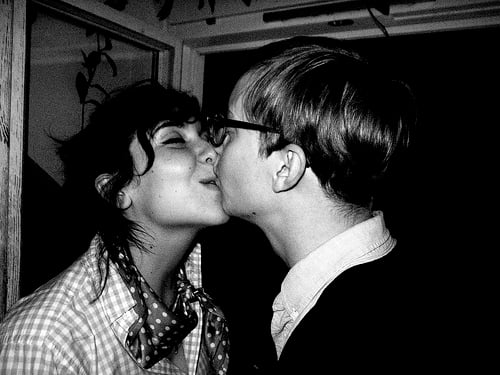 This past weekend, while trying to practice social distancing…

My boyfriend and I stayed home and watched the documentary Hillary on Hulu — all four parts in one day. At multiple points throughout the documentary, we got choked up at the same time.

Lest you imagine two people openly weeping, this was not the case. (We’re sensitive types who pretend to be stoic.) It’s more like, whenever a story reaches its emotional apex, there is a subtle but unmistakable “sniff, sniff.” We both pretend it’s not happening, but it totally is.

This is not a singular occurrence. (See also: nature shows, multiple episodes of Queer Eye, pretty much the entire film about Danny and Ron’s rescue.) The more it happens, the more we’ve embraced it.

When asked about what makes them weak in the knees, some friends had this to say:

“Men running with dogs. Men walking with dogs. Just men with dogs. When I take my dog to the dog park, he gets to have fun with the other dogs, and I get to fraternize with the dog dads. Everybody wins.”

“I’m the scheduler in the relationship and I’m usually the one to tackle reservations and plans. So when she takes the lead on making plans for just the two of us, it makes me feel special.”

Says one friend, “I get all fluttery when I see dads being cute with their kids. It’s not, like, a romantic swoon. It’s more of a humanity swoon.”

After much thought, another friend replied, “In 2020, my swoon-worthy things all verge on the esoteric. Like someone who listens.” Amen to that.

How about you? What things make you (secretly or not-so-secretly) swoon?

P.S. Five words that changed my relationship and what are your random turn-ons?