Soon, communities and even nations could be drawing water faster than the skies can replenish it. As the wells run dry, so will the rivers. 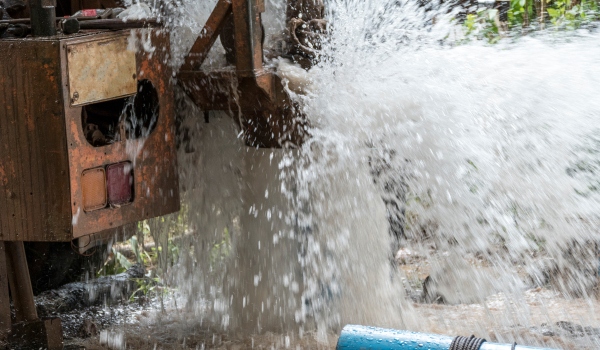 LONDON, 9 October, 2019 − Within three decades, almost 80% of the lands that depend on groundwater will start to reach their natural irrigation limits as the wells run dry.

In a world of increasing extremes of drought and rainfall, driven by rising global temperatures and potentially catastrophic climate change, the water will start to run out.

It is happening already: in 20% of those water catchments in which farmers and cities rely on pumped groundwater, the flow of streams and rivers has fallen and the surface flow has dwindled, changed direction or stopped altogether.

“The effects can be seen already in the Midwest of the United States and in the Indus Valley project between Afghanistan and Pakistan,” said Inge de Graaf, a hydrologist at the University of Freiburg.

Groundwater – the billions of tonnes locked in the soils and bedrock, held in vast chalk and limestone aquifers and silently flowing through cracks in other sediments – is the terrestrial planet’s biggest single store of the liquid that sustains all life.

“If we continue to pump as much groundwater in the coming decades as we have done so far, a critical point will be reached for regions in southern and central Europe as well as in North African countries”

Groundwater supplies the inland streams and rivers, and the flow from tributaries is an indicator of the levels of water already in the ground.

For thousands of years, communities have drawn water from wells in the dry season and relied on wet season rainfall to replenish it. But as human numbers have grown, as agriculture has commandeered more and more of the land, and as cities have burgeoned, demand has in some places begun to outstrip supply. The fear is that rising average temperatures will intensify the problem.

Dr de Graaf and colleagues from the Netherlands and Canada report in the journal Nature that they used computer simulations to establish the likely pattern of withdrawal and flow. The news is not good.

“We estimate that, by 2050, environmental flow limits will be reached for approximately 42% to 79% of the watershed in which there is groundwater pumping worldwide, and this will generally occur before substantial losses in groundwater storage are experienced,” they write.

That drylands – home to billions of people – will experience water stress with rising temperatures is not news. Climate scientists have been issuing warnings for years.

The important thing about the latest research is that it sets – albeit broadly – a timetable and a map of where the water stress is likely to be experienced first.

“If we continue to pump as much groundwater in the coming decades as we have done so far, a critical point will be reached also for regions in southern and central Europe – such as Portugal, Spain and Italy – as well as in North African countries,” Dr de Graaf warned.

“Climate change may even accelerate this process, as we expect less precipitation, which will further increase the extraction of groundwater and cause dry areas to dry out completely.” − Climate News Network