Allowing the US population to simply absorb the blow of the maximum coronavirus mortality rate is the GOP’s only way forward. 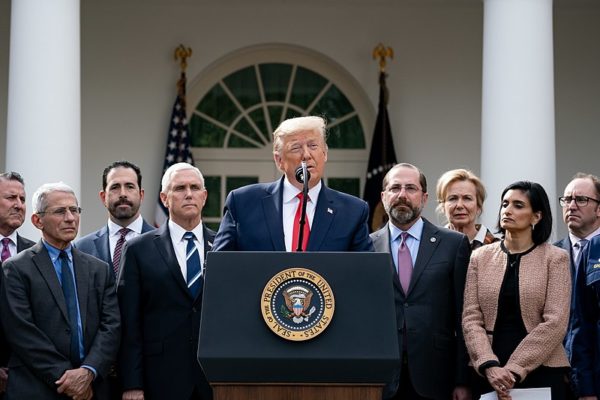 Millions have socially isolated for weeks flattening the curve. Now Trump and the GOP’s white nationalist base is out protesting and spreading the virus, so we’ll be in lockdown for months longer. Had Trump taken action in the ways Germany did, with and massive federally orchestrated testing and tracking effort, we might well be coming out now.

Trump isn’t troubled by the catastrophic loss of life. He has never acknowledged the more than 35,000 dead thus far. A rate that is accelerating. For now, the majority of deaths are taking place in urban centers which explains why. For now, people of color a far more at risk.

Generations of racist policies have located polluting industries near Black/Latino neighborhoods. These and other systemic inequalities result in higher levels of chronic health conditions including asthma. That coupled with POC being front line workers makes them vulnerable.

Trump and his white nationalist base, which has always associated urban centers with immigrants, people of color and Democratic politics are not simply unconcerned with the loss of life, Trump has withheld PPE and ventilators from Democratic governors.

From Citizens for Responsibility and Ethics in Washington on April 2:

Massachusetts only received 17% of aid requested and Maine 5%, while Florida will receive its 3rd shipment of 100% of aid requested. We’re investigating if the Strategic National Stockpile is distributing aid based on Trump’s personal preferences.

I’m reminded of the Reagan administration’s initial lack of concern about HIV, viewing it as “gay cancer.” We’re seeing that same mindset play out with Trump supporters. If people are dying in urban blue states, who cares, right? They can’t imagine COVID-19 hitting their towns

The political result? Trump’s utter failure to organize even the most minimal federal testing and tracking effort means it must now be put in place by the states even as Trump calls for “liberation,” asking his base to challenge stay at home orders. His catastrophic failures have resulted in over 35,000 US deaths.

Soon, though, the coronavirus will hit rural communities hard. So, it would seem that Trump and the GOP have made a brutal calculation. Failing any action in the first 90 days of the pandemic, they have little choice but to bully their way through the rising body counts. But unlike the Reagan Administration, which by its inaction, allowed the HIV epidemic to spread, the Trump/GOP response has been to actively withhold federal supplies from states who’s Governors who did not show Trump adequate “appreciation.”

From CNBC on March 27th:

President Donald Trump said Friday that he instructed Vice President Mike Pence not to reach out to governors who aren’t ‘appreciative’ of his administration’s efforts to slow the spread of the coronavirus in their states.

Trump’s message is to Democratic governors is clear: bend the knee or pay the price. This threat, made in a very public way when Trump says he expects “them to be appreciative,” shows clear intent to punish Democratic-leaning states by withholding crucial supplies. When Donald Trump intentionally punishes Democratic Governors by withholding crucial Federal supplies and equipment from their states, resulting in unnecessary loss of life, what do we call that?

Now Trump has gone a step further, encouraging insurrection in states with Democratic governors which are issuing stay at home orders, pushing to “open up” the nation. He is weaponizing his base in an effort to let the coronavirus “wash over” us.

President Trump reportedly asked Anthony Fauci, the nation’s leading infectious disease expert and a key member of the White House’s coronavirus task force, whether U.S. officials could allow the coronavirus pandemic to “wash over” the country, The Washington Post reported.

It looks very much like Trump thinks he can win the coming election if he can destabilize the state led response to coronavirus and render it politically untenable. In fomenting protests designed to let the virus “wash over us” Trump is committing mass murder in the interest of political expediency.

To be reelected, Trump will destabilize stay at home mandates and spread rebellion against public health efforts. He has little choice now. Allowing the US population to simply absorb the blow of the maximum coronavirus mortality rate is the GOP’s only way forward.

The question becomes, can our political institutions or our national cohesion survive until the November election?