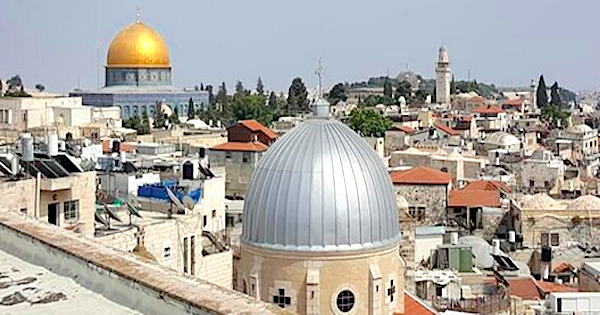 “Hello,” she says, genially.
And you smile back wondering why you were so on edge.
“Your first time to Israel?” the agent inquires.
“Yes,” you beam.
“Purpose of your visit?”
“To see the Holy Land,” you respond.
“Where, exactly?” she probes.
You forget everything you were prepared to declare.
“Jesus… Where Jesus went,” you stutter.
“Yes, but where, exactly?” she quizzes, still smiling.
You nervously touch the cross you’re wearing and for a moment her gaze shifts from the wrinkle between your brows to your neckline.
“It’s a gift from my mother,” you blurt out.
“She made it from the gold bangle her father gave her. I would like to have it blessed in … the Holy Land.”
“I see.” She hands you back your documents minus your passport.
“Go and wait over there until one of my colleagues calls your name.”

Minutes go by … ten… fifteen … Names are called, people respond. Some disappear with the officials who materialize to claim these wards. Twenty minutes go by… thirty. You overhear the other detainees talk among themselves. A friend’s told you that if you are held, then you should presume you’re being watched. Maybe even by someone in the group. You don’t join in the conversation. An hour now… an hour and a quarter. “I’ve been here three hours,” you overhear one of the men say. The dressy but impractical outfit you’re wearing clings closely to you. The sweat in your armpits has definitely stained your shirt. You cannot take your jacket off now.

You hear your name being called.

“Yes!” The sound you make startles even you. The burly man beckons with your passport in his hand. You follow dutifully and are thankful that he takes you no further than a few steps outside the holding area. “First time in Israel?” Your fingers instinctively graze the cross at your neck, but you bite your tongue before you blabber on about your mother, your grandfather, and the Holy Land. He questions you about what you do for a living. You respond. He tells you to write down the name of your father and his father. You oblige. He gawks at what you’ve written, pointing to the six long Portuguese words that constitute your paternal grandfather’s moniker.

“My grandfather’s name,” you explain.
“Your father and his father are Catholic?” he queries.
You nod.
“Stay here,” he commands.
You return to the pen where the others look at your visage for signs of their own fate. 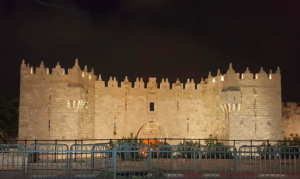 An hour and a half… two hours. A different official calls your name. She gives you your passport and graciously adds, “Welcome to Israel!” as if the last couple of hours hadn’t happened. You surmise that they’ve Googled you, your father, and your grandfather’s six names, and have been suitably dissuaded of the idea that you are a recent convert from Islam. As you leave, the man who had been in the holding area the longest brushes past you so as to intercept the agent. “I’ve been here four hours … ” You hurry for the exit.

It’s dark now as the taxi takes you to your hotel. You see nothing along the way. But then, when the car slows down, you know you’re finally in Jerusalem for you see the most beautiful sight. Softly bathed in the golden light of the lamps below, its crenelated silhouette set against the night sky. The Damascus Gate. Suddenly, that interminably long flight, the security measures you’ve endured, the slightly damp clothes pressed against your skin in the cloying heat—none of it matters.

Lights glow within the arch like a promise of the world it leads to. You are so much in awe that you can almost block out the backlit armed guards on watch outside the magnificent gate.

Even the new-looking watchtower that partially obscures your view of this half-millennium old vision is not that much of a hindrance, you nearly convince yourself.

You barely sleep knowing that in just a little while it will be daybreak and you will walk through that gate to enter the biblical city. You will be inside Old Jerusalem.

In the morning light, none of your ardour fades. You stand in front of the Damascus Gate as your tour guide tells you its history. Your wonderment grows as you behold the legendary entryway in the sunlight; your surroundings are equally illuminated now. People mill about all around you: residents, tourists, and vendors of various wares. But it’s the young Palestinian children you notice. Mainly boys huddled in groups of three or four near the entrance. They eye the soldiers at the entrance or skulk away. 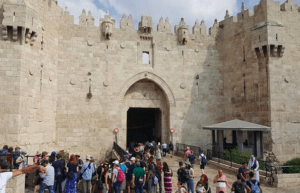 The air is thick. It’s the heat you try to convince yourself. That inexplicable nervousness you felt at the airport returns. You don’t make eye contact with the Israeli guards as you walk into the gate. Your guide stops and points out the bullet holes in the large metal door within the archway. You notice the faded shape of the crescent and star that had once been painted on the entrance.

Later, a local professor who lives just beyond the Jewish Quarter of the old city will tell you about how earlier that day, just like on so many others, she had to intervene in the detention of a child on his way to school. The Israeli authorities held him for the maximum amount of time permissible under the law for a minor to be detained. But they hadn’t let his parents know when they could have him back. You think back to your own detention that evening of your arrival, trivial now in comparison to a child being held under scrutiny in the very place they should feel safest—their homeland. 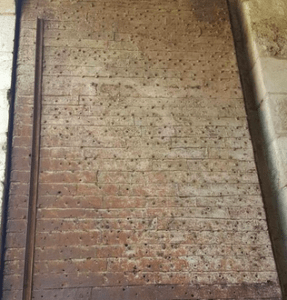 The professor tells you about her research, about how young Palestinian children are subjected to forms of intimidation that she describes as latent sexual violence. Just a few days ago, a girl she knew—no more than eight or nine—spotted the professor and ran over to ask if they could walk to school together. The little one grabbed the woman’s hand tightly and picked up the pace as they went past an armed guard. Something wasn’t quite right, the professor construed. When they arrived at the school, the agitated girl calmed down enough to tell the professor about how the other day one of the guards made her unveil.

Many of the smaller girls pile up their hair under their headscarves, the woman explains to you, so they may look a little taller, maybe just a little bit older, a little bit of a defense tactic in their own city.

The soldiers made the girl undo her hair and ran their hands through it, ostensibly looking for a hidden weapon or incendiary device.

There are other stories the academic shares of young Palestinian boys made to pick things up off the ground by the soldiers. This, so that the little ones’ eyes meet the soldiers’ guns held at waist-level. And their crotches.

As you hear these accounts, your mind winds back through the old city of Jerusalem. You place the events you’ve been told about along the route you traversed. From the storied gateway into the hallowed city, down the Via Dolorosa where you genuflected at each of the Stations of the Cross you encountered, until you stood outside that most venerable site of the Church of the Holy Sepulchre. 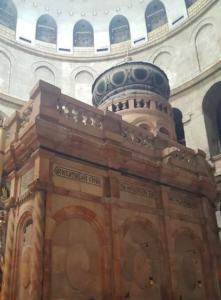 Could it have been at the Third Station, by the Armenian Catholic Patriarchate and just past the Ecce Homo arch, that a little Palestinian boy was ordered to pick something off the street just so he would be forced to get an eyeful of a soldier’s piece? This is where Jesus is said to have fallen for the first time under the weight of his cross.

You had paused at the Sixth Station and contemplated the miracle of Jesus’ visage transferring onto the piece of cloth St. Veronica wiped his face with. She had used her silk veil. You ask yourself if it might have been there that the little Palestinian girl was made to unwrap her headscarf, where the Israeli soldiers ran their fingers through her tresses.

Just outside the Basilica of the Holy Sepulchre, you stopped and looked up and all around you in the solemn location. You still couldn’t believe you were there. To your right was the Franciscan chapel dedicated to The Tenth Station. You consider if just outside the holy compound may have been where they detained the little Palestinian schoolboy, his parents awaiting his release. You had kneeled at the Tenth Station of the Cross and recalled how Jesus was stripped of his garments. 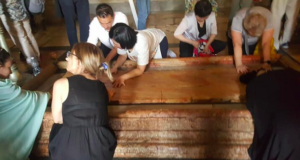 Devotees touch the Stone of Unction, Basilica of the Holy Sepulchre

In the sacred rotunda of the Basilica, you wait respectfully for the other devotees to lift themselves off the floor just inside the main entrance. The pilgrims gently lay their hands on the slab of pink limestone on which Jesus’ body is said to have been prepared for entombment. Visitors have anointed the stone with rosewater. Its scent lingers. You hear sobs. Tears are visible on the craggy surface of the Stone of Unction. You look to the left and see the sepulchre itself. When it is your turn, you lower yourself in near prostration at this most revered place in all Christendom. The cross on the chain around your neck, the one your mother gave you, the one she fashioned from a memento from her father, grazes the stone.

And you silently pray for Palestine.

Originally published, in slightly different form, in Joao-Roque Literary Journal. Republished with permission. All photos courtesy of the author.

What’s your take on what you just read? Comment below or write a response and submit to us your own point of view or reaction here at the red box, below, which links to our submissions portal.