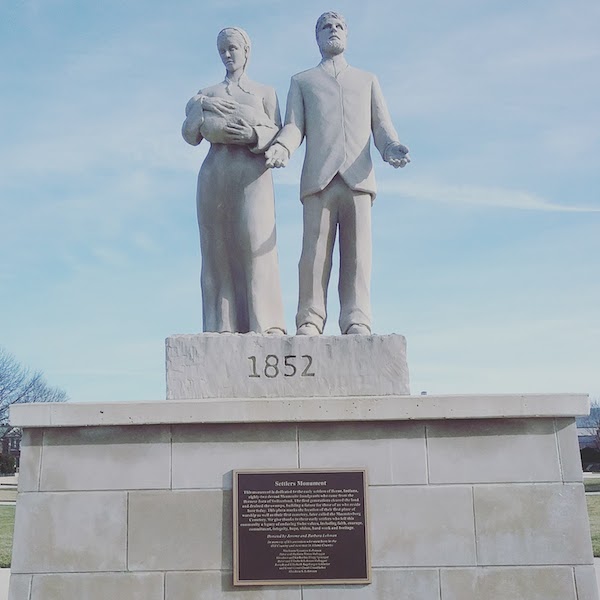 When people today think of the Old Order Amish they tend to romanticize: kerosene lamplight, no television or Twitter, plain dress, horse-drawn buggies and the simple farmer’s life.

What they do not think of is the Amish as persecutors or enthusiastic Trump supporters for that matter but to understand Amish today means a wider examination of both history and geopolitical and socio-cultural aspects.

September 4th, 2019 marked 181 years since the beginning of The Trail of Death: the forced removal of the Miami and Potawatomi tribes in 1838 from Indiana to Kansas, as militia burned their fields and homes.

Amish immigrants, including my own paternal ancestors, were among the first settlers of Berne (Adams County), acquiring their lands. Our ‘Schwartz Family History’ book states the Native Americans were ‘about 20 years removed’ when Johannes Schwartz immigrated from Bern, Switzerland to Indiana, noting retaliatory horse theft was occasional. Today a Swiss Anabaptist settlers monument stands in Berne, Indiana, along with a replica of Bern’s Zytglogge clock tower.
What is not written in our history books is the trauma inflicted on Native Americans by Amish colonization.

The oldest Amish settlement in America is in Lancaster County, Pennsylvania (founded circa 1760) although early Amish immigrants arrived circa 1730 at the invitation of William Penn, seeking religious freedom. Anabaptists in Europe were persecuted by both The Roman Catholic Church and the Protestants (Martin Luther himself deeming Anabaptists too radical) for their belief in adult (voluntary) baptism, pacifism and refusal to join the military.

The persecution of early Anabaptists was documented in The Bloody Theater or Martyrs Mirror of the Defenseless Christians who baptized only upon confession of faith, and who suffered and died for the testimony of Jesus, their Saviour, from the time of Christ to the year A.D. 1660 by Thieleman J. van Braght. Many Amish today own a copy of this book and see themselves as modern-day martyrs, despite practicing shunning which is in itself is deliberately inflicting trauma.

A CARM article notes Amish shunning is bound up in legalism and human tradition.

As America progressed throughout the years the Amish chose to maintain traditions, eschewing electricity, cars, higher education and until recently cell phones (yes, some Amish have iPhones and Facebook accounts today).

Often called “cousins” to the Amish, the more liberal Mennonites sought a more direct involvement with the world whereas Amish sought isolation.

Although Amish have issued an apology to Israel:

We, the Amish and Anabaptist people turned away from the Jewish nation, while they were in their darkest hour of need…We hardened our hearts against them, we left them — never lifting our voices in protest against the atrocities that were committed against them. We want to publicly repent of this and acknowledge our support of Israel.

Today, Amish (and some Mennonites) could be said to be repeating history by shunning their LGBT minority, preaching anti-gay sermons, refusing to perform same-sex marriages and attending Trump rallies, chanting Build the Wall! and Lock Her Up! History repeats itself.

In Boston Review: The Pacifist Roots of an American Nazi Ben Goossen writes For Mennonites, moving forward will mean dismantling the language and logic of “ethnic” peoplehood.

Growing up gay and Amish I avoided being shunned by leaving before baptism and joining the church but have been subjected to vicious homophobia, by Amish and non-practicing Amish and Mennonite family. This is the reality all LGBT Amish face, especially if they choose to come out publicly as I have.
Per The Universal Declaration of Human Rights, the Amish church continue to violate Articles 1, 2, 3, 5, 8, 9, 12, 16, 26 and 27.

There are signs of some progress being made, regardless.

As we live in an increasingly high-tech society and the Anabaptist diaspora is connected as never before, now is a chance to address historical trauma for healing and to move forward.
Early Anabaptists understood the message of Christ was radical love and in this perilous time in history, generations after being burned at the stake, have an opportunity to embody it.

Photo courtesy of the author.