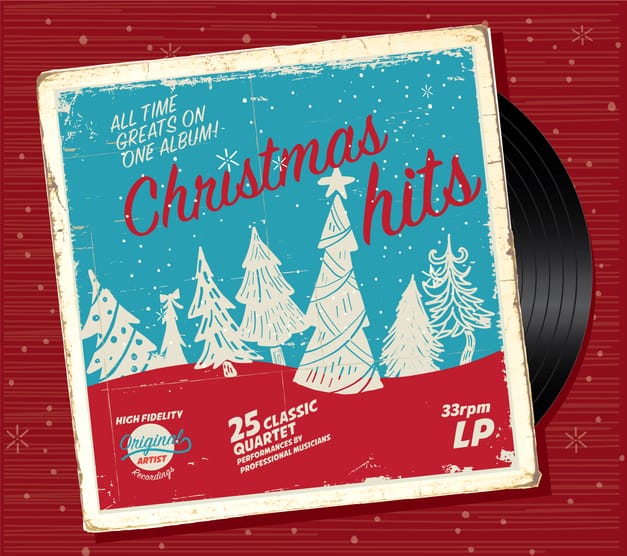 Due to the brisk response I received to my “Top 10 Christmas Shows” post, I decided to tackle a song list.

As a music guy and a Christmas freak, it was impossible for me to narrow it down to 10, so I added five.

With a few exceptions, these songs have all been recorded probably thousands of times each and would be on many similar lists.  The real debate starts with the choice of artist and version.  For me, it’s about selecting the version I can listen to over and over again, year after year.   It’s also about my childhood memories, which makes it virtually impossible that you and I would create the same list.  (If we did, that would be extremely weird and I would be concerned about you.)

So, in descending order…

To my ears, Johnny Mathis is a real hit-or-miss type of singer.  “Chances Are” and “Misty” are major hits and a lot of other things are major misses.  When it’s bad, it’s real bad, and he sounds suspiciously like Ethel Merman.  However, Johnny’s version of “Sleigh Ride” is a quintessential Christmas song, and he recorded it back when he sounded youthful (because he was young) and his vibrato had not yet gone crazy.  The arrangement and room sound of the orchestra is perfect.  It just sounds like Christmas.  This song always takes me back to my annual six-hour trip home from college at East Carolina University at Christmastime and the fantastic holiday mix tape I would jam out to, singing at the top of my lungs.

Has there ever been a better version recorded of this song??  No way!  Whoever wrote “The Twelve Days” must have been a sadistic son-of-a-gun, because it takes roughly the same amount of time as “American Pie” and “The Wreck of the Edmund Fitzgerald” combined to sing it, but in the capable hands of John Denver and the Muppets, it’s sheer entertainment.  One of the great vocal performances in recording history is that of Beaker singing “Mee me me me me” for eight maids a-milking.

If you want some serious blues in your Christmas, don’t choose “Blue Christmas.”  Choose this.  On no other Elvis recording will you find him rocking with the intensity that he does on “Santa Claus is Back in Town.”  I love how the listener is lulled by The Jordanaire’s vocal intro into thinking this will be a smooth, sweet Christmas song, and then… BAM!  The snare and piano start banging and Elvis just goes nuts.  He was never better.

Another 1957 release is the original Jingle Bell Rock, by Bobby Helms.  Brenda Lee’s version is a very close second to this, and I even like Hall & Oates’ crack at it.  But there’s something rockabilly-cool about Helms’ voice and the sound of the track.  It’s a little less polished than Lee’s, and the song is one of the most infectious on the list.

This version will probably be unknown to most of you.  Back in the late ’80s, I somehow came by a copy of MCA Master Series’ Sounds of the Season, an instrumental compilation CD.  It quickly became one of my all-time favorite Christmas CDs because of its incredible diversity.  The hallmark of the album, though, is this touching version of “Away in a Manger” by the greatest dobro player in history — Jerry Douglas.  If you have any emotional tendencies toward music, go ahead and grab a box of Kleenex.  It’s one of the most beautiful things you’ll hear.  I can’t find the exact version from that recording, but this one is very close.  (You’re welcome, by the way.)

You know I can’t compile a best-of music list without including my man, JT.  As he has done on many other occasions (“You’ve Got a Friend,” “Up on the Roof,” etc.), Taylor takes an established song — in this case, a 19th-century African-American hymn — and infuses it with the smooth, poignant coolness that only JT can deliver.  I remember exactly where I was — the Lowes’ parking lot in Smryna, Tenn. — the first time I heard it.  And that was nine years ago!

Yes, yes, I know what you’re going to say:  “How the heck can you pick Jimmy’s version over the great Bing Crosby’s??”  Fair question.  The honest truth is, the two are nearly identical in arrangement, but I just like Buffett’s production a little better.  I especially like the drums and the ukelele.  I think it’s cool that Buffett can pull off the same vibe, along with Andrews Sisters-like background vocals, that Bing did back in the day.  And most of all, I like that little “twinkle” Buffett has in his voice.  It’s exactly his kind of song.

There’s something about Vince Guaraldi’s A Charlie Brown Christmas soundtrack that has made it a classic.  I’ve heard the exact same songs played on piano the same way many times since, and it’s not even close.  Even Guaraldi’s later Charlie Brown work didn’t measure up.  When “O Tannenbaum” kicks into its swing section, Guaraldi absolutely plays out of his mind.  I’m not a big jazz guy, but I can listen to this all day long.  In fact, I have on many occasions!

This is one of those situations where a song gets connected to a holiday by accident, kind of like how the movie It’s a Wonderful Life is associated with Christmas, but doesn’t really have that much to do with it.  “Same Auld Lang Syne” tells a wistful story of a guy running into an old girlfriend at a grocery store on Christmas Eve.  He mentions Christmas in the second line, and that’s it, but it will forever be thought of in the context of Christmas.  The story, incidentally, is true.  Both Fogelberg and his former girlfriend — a woman named Jill Greulich — had run out to pick up supplies for their respective parents in Peoria, Ill., one Christmas Eve in the mid ’70s.  Out of respect for her marriage, Fogelberg never revealed her identity, nor did Jill until after the singer died in 2007.  Click here to read an article about it.  And oh, by the way — Michael Brecker’s sax solo at the end?  Sick, to use the popular vernacular, and always raises a fat lump in my throat.

“Jingling Brass” is basically just “Jingle Bells” played in a few different keys, but that doesn’t matter.  What matters is, this is the first song of the first Christmas album (not CD, mind you) that my family put on to decorate the tree by each year when I was growing up.  As soon as we got the tree erected in its stand, Dad would shout, “Put on Danny Davis!”  The opening notes of “Jingling Brass” just make me happy.  This is my list, y’know.

Top five.  Now we’re getting serious.  Perry Como, 1960s-’70s TV specials, Christmas sweaters…  That’s what I’m talking about!  This song has it all:  Perry’s incredible voice, bouncy, Percy Faith-style choral singing, and swingin’, finger-snappin’ jazz.  One thing I never understood was why the man who lives in Tennessee was heading to Pennsylvania for pumpkin pie.  I’ll allow that Tennessee produces pumpkin pie just as good or better than Pennsylvania.  I guess the traveler was a native Pennsylvanian and it’s not for me to question.  But I digress…

Aside from the “bonus” track, “Tender Tennessee Christmas” is the only “new” Christmas song on my list.  Amy Grant released it back in 1983, when she was 7.  Actually, she was only 23, and co-wrote the song with her then-husband, Gary Chapman.  “Tender…” is one of the only modern Christmas songs I’ve encountered that I would stack up against the biggies of the ’50s and ’60s.  It just sounds, well . . . classic.  I’m also partial to it because since 1990, I’ve been a Tennessee resident, and the song makes me feel good about my pumpkin-pie makin’ state.

Here’s another nod to my bluegrass music upbringing.  David Grisman’s “Acoustic Christmas” CD is simply amazing.  The arrangements are mind-boggling, as are the individual performances, and “Auld Lang Syne” is the best.  The only way to listen to this is while driving home on Christmas Eve with the volume set on 11.  You think it’s going to be a slow, tasteful track until Bela Fleck tunes his banjo strings up ala “Earl’s Breakdown” and then it’s off to the races. Classic.

No big surprises in my top two.  They are essentially interchangeable.  Andy Williams is my favorite of the crooners, like I mentioned in an earlier post.  The stars aligned perfectly when he recorded “Most Wonderful…”  Other people sound silly covering this song.  It’s only Andy’s.  Don’t even try.  Here’s an awesome live version.

And my No. 1 Indispensable Christmas Song is…

OK, lay it on me.  What did I egregiously leave off the list?  Use the comment box below!  Merry Christmas!

This post was previously published on Doofus Dad and is republished here with permission from the author.
—