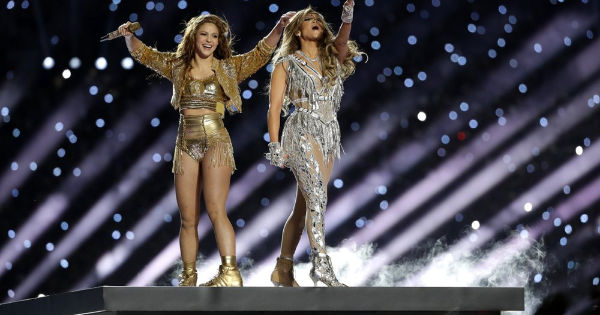 The Super Bowl Halftime Show got them all hot and bothered.

Too sexual.
Too disrespectful to women.
Too much skin.
Those outfits.
The gyrations.
The sexual innuendo.

“Won’t someone please think of the children?!” they shout with raw-throated urgency through the streets of social media.

Suddenly, in the span of ten minutes on Sunday they became concerned with the welfare of women and girls.

I wonder if they were thinking of women and girls three years ago when they voted for the guy who said:

“I don’t think my daughter Ivanka would pose nude, although she does have a very nice figure. I’ve said if Ivanka weren’t my daughter, perhaps I’d be dating her.”

How concerned were they about the exploitation of women, when they cast their ballot for a man who bragged:

I did try and f*ck her. She was married. I moved on her very heavily.

I moved on her like a b*tch. I couldn’t get there and she was married.”

Was the dehumanizing of young women heavy on their hearts when they declared Presidential, the guy who’d just weeks earlier said:

“I just start kissing them. It’s like a magnet. Just kiss. I don’t even wait.

I’m pretty sure if irony were fatal, these folks would have expired by the end of the third quarter on Sunday. They are terribly afflicted with it.

Their moral flexibility has been astounding. The Internet is littered with pornographic images of the First Lady, which doesn’t seem to be a moral quandary for Trump supporters*, no matter how Christian they claim to be or how loudly they trumpet their “Family Values” convictions. They’ve made peace with that long ago. (Apparently, full frontal nudity between two women simulating sex, is perfectly fine—so long as one of them later becomes the third wife of the serial adulterer and professed predator they want to vote for). But two talented, powerful, and accomplished women delivering a carefully choreographed and brilliantly executed dance number, while wearing as much as the cheerleaders walking the sidelines—is a pressing moral problem.

Let’s be honest: supporters of this President don’t care about women. If they did, they’d have voted differently. It’s really that simple.

They don’t care about women’s safety or their consent or their choice regarding their bodies. Otherwise they wouldn’t have vilified sexual assault survivors or confirmed Brett Kavanaugh or ridiculed the #MeToo movement or be fighting incessantly to overturn Roe V Wade.

They want women on their terms. They want to define and control them. They want to determine how they are to express empowerment or assert their physicality or wield their sexuality or exercise their talents.

The unbridled misogyny of this President and his supporters explains why a far more qualified, more intelligent, and more prepared candidate (who happened to be a woman) isn’t the Leader of the Free World—and instead we have the lecherous, toxic male-mess we do.

If Red voters really care about women as much as they claim to this week, they should put their ballots where their mouths are—and elect a woman to lead.
They should stop casting their lots and their votes with a guy most of them would keep 100 yards from their wives, sisters, and daughters.
They should give women the choice over how they dress and how they move and what happens to their anatomy and what female empowerment looks like—for themselves.
They should stop perpetuating a male-dominated Evangelical church that defines women as less-than and original sin-committers.

Until then, these random and selective moments of moral histrionics and righteous indignation, and their crocodile-teared declarations of concern for women are all going to be world championship-level hypocrisy.

Dance on, ladies: wherever and however you decide.

Dance all the way to the friggin’ White House.

I’ll be cheering you on.

*To be clear, I’m not at all making the assertion that a woman posing nude is anything to be ashamed of, but merely pointing out the inconsistent, selective moral outrage of Trump’s Christian base, who had a problem with one First Lady baring her shoulders—but have no issues with another one baring her breasts.