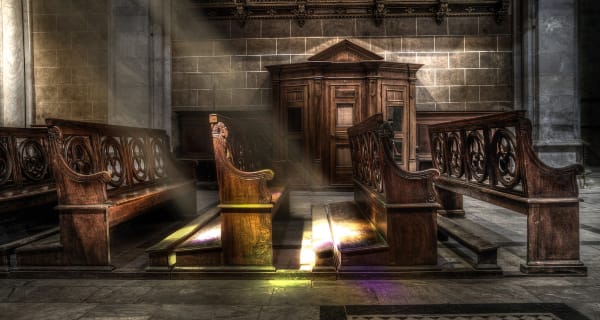 I have a confession to make. I have lost my faith in the Church and I’m not the only one.

In my country, Australia, around 70% of the population report having some kind of religious affiliation, but on any given weekend, only around 8% actually attend some kind of worship service. It seems that many people do have a faith of some kind, but that faith does not translate into loyalty to a religious institution.

As for me, I have grown up in the church and I have never really thought about leaving. However, as I progressed through my teenage years and then young-adulthood, I began to observe many people who not only thought about leaving but had the audacity to follow through. More alarmingly, I began to notice that people who had genuine faith questions and, especially those who had doubts about whether church systems and structures were truly what God had in mind, were shut down and then, eventually, shut out. I have seen the Church systematically shunning and shaming people who expressed these doubts. I have had first-hand experience of church leaders actively encourage congregants to cut off people who have walked away, warning them of the potential negative influence they might have. I am ashamed to admit that I participated in the judgment of “backsliders,” turning up my nose at them in self-righteous indignation and with evangelistic zeal tried to win them back.

Then one day, something changed in me.

I myself, began to question everything as well. Like many people, this was precipitated by a life-crisis that caused me to examine everything I believed in. I had always imagined that I would be stronger in my faith than all those others. The words of Peter the Apostle were my mantra: “Surely, not I, Lord!” Yet, in spite of this, I found myself in a place of terrifying doubt.

I began to wonder what was wrong with me to the point of beating myself up. So, I expressed these concerns to a much older, wiser friend who suggested to me that doubt and disillusionment are in fact a sign of spiritual growth, rather than spiritual decline and he pointed me to the work of James Fowler, a Professor of Theology and Human Development.

Doubt and disillusionment are in fact a sign of spiritual growth, rather than spiritual decline

In 1981, Fowler published a work called Stages of Faith. Without going into too much detail, here is a summary of each of the stages.

Stage 1: In stage one fantasy and reality often get mixed together. However, during this stage, our most basic ideas about God are usually picked up from our parents and/or society.
Stage 2: When children become school-age, they start understanding the world in more logical ways. They generally accept the stories told to them by their faith community but tend to understand them in very literal ways. Some people even remain in this stage all through adulthood. (Yes, I’m talking about your average fundamentalist believer).
Stage 3: Most people move on to this stage as teenagers. At this point, their life has grown to include several different social circles and there is a need to pull it all together. When this happens, a person usually adopts some sort of all-encompassing belief system. However, at this stage, people tend to have a hard time seeing outside their box and don’t recognize that they are “inside” a belief system. At this stage, authority is usually placed in individuals or groups that represent one’s beliefs. This is the stage that most people remain in for the rest of their lives.
Stage 4: This is the tough stage and those who go there, often begin this stage in young adulthood, when people start seeing outside the box and realizing that there are other “boxes”. They begin to critically examine their beliefs on their own and often become disillusioned with their former faith. Ironically, the Stage 3 people usually think that Stage 4 people have become “backsliders” when in reality they have actually moved forward. During Stage 3 people many decide that to question everything they have held onto up until this point is too scary, and retreat back to the safety of Stage 3. Alternatively, they may be unable to reconcile their doubt and abandon faith all together. A smaller group will press on through to the gold that can be found beyond Stage 4.
Stage 5: It is rare for people to reach this stage before mid-life. This is the point when people begin to realize the limits of logic and start to accept the paradoxes in life. They begin to see life as a mystery and often return to sacred stories and symbols but this time without being stuck in a theological box. People in this stage become comfortable with not knowing all the answers, and not needing to know and, in that sense, actually experience true faith rather than the watered-down version they constructed earlier in life.
Stage 6: Few people reach this stage. Those who do live their lives to the full in service of others without any real worries or doubts.

For the visual people among us, here’s a diagram to help you picture what this progression looks like:

As you can see from Fowler’s Stages of Faith, the person who is experiencing a “faith crisis” may actually be further advanced in their faith development than the person who has never done so. This was a revelation for me but it also made complete sense. How can faith be proved genuine unless it is genuinely tested? Was it possible that all those ‘terrible’ people who had dared to question everything were actually making progress in their faith while I sat back and shook my head at their backsliding?

For most of my life, I have been to church twice a week or more. Services, prayer meetings, Bible studies… the works! You name the spiritual activity and I’ve participated in it. I can assure you that the Church encourages its members to “Grow in their Faith.” Regularly. Consistently. Which got me thinking… why is the church so frightened of people questioning their religion and the religious systems set up to perpetuate it? Shouldn’t the church welcome the faith crisis as a necessary step toward faith maturity?

Yes, they should. But they won’t, and there is a very good reason for it and here it is: People caught in ‘Stage 3’ faith are loyal to the system and trust in the authority of the people who establish themselves as the gatekeepers of the system… even to the point of ignoring the glaring problems inherent in the system and, dare I say it, the sin that is allowed to run rife therein. The church DOES want you to grow, but only to a point located somewhere before you actually start taking a critical view of church. After all, a person who is questioning the church might be tempted to re-direct their tithes and offerings elsewhere — perhaps to say, helping the poor and needy — rather than paying the pastor’s salary and building more magnificent buildings.

Call me cynical… but if you do, beware! Maybe, just maybe, I’m actually on a journey to a deeper faith while you sit back at judge me from the comfort of your pew. I may have lost my faith in the church, but that doesn’t mean I’ve lost my faith. The same applies to anyone who is in that terrifying season of doubt. A deeper and more genuine faith awaits!