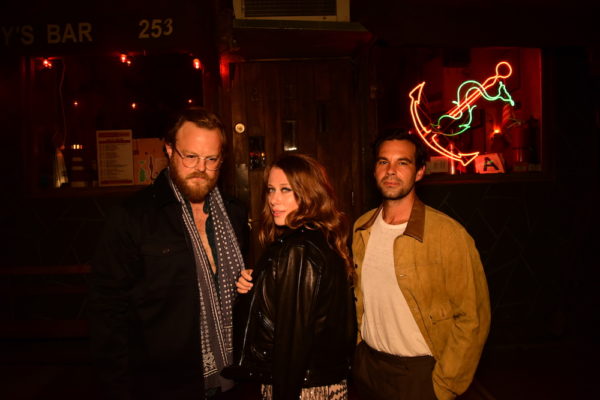 In this patriarchal society we men have created and perpetuated, we are often unaware of the silence of the women in our lives. Likewise, we are often ignorant of the reasons for it.

From the time they are little girls, females in our society are discouraged from vocalizing about their life experiences and as the #MeToo movement has shown us, this is especially true when it comes to relating and revealing many of the sexist, misogynistic and abusive things that occur to them in their lifetimes. Over the course of their everyday lives, women in this world often face a world vastly different from our own, a world in which their opinions are oftentimes unwanted, unsolicited, and unwelcome.

Such are the themes touched upon by Kanene Donehey Pipkin, a multi-talented musician, singer, and songwriter for the Americana/Folk trio The Lone Bellow in a new song called “Just Enough To Get By” on her band’s newly released fourth album, Half Moon Light.

I recently had the pleasure of having a conversation with Kanene about this powerful and groundbreaking song via phone and our conversation, edited for length and clarity, is below.

JMA:  So, let’s start at the beginning. What was the inspiration for you to write your band’s new song “Just Enough To Get By”?

KDP: It is a song that is inspired by a traumatic thing that happened to my mother when she was young, the aftereffects of it, and what it means to be a survivor.

When she was a teenager, my mother was raped, got pregnant from it and was sent away by her family to have the baby out of the public eye of her community. Most of the people around her, including, oddly enough, a lot of her other family members, never knew about what had happened to her and she kept it a secret for 40 years. The way all of us as a family found out about it was when her daughter – the product of the assault- found her and contacted her. It’s been about a decade now since my half-sister appeared into our lives and it has been a long, slow journey to wholeness for my mom since then.

So, the song is also about the things we keep hidden from the world and the self-imposed silence that women utilize to shield themselves from society’s scorn and judgment.

At the same time, it’s also about overcoming the shame that comes along with being a victim and the times in all of our lives when we try to pretend that we’re OK when we’re not and about trying to get well after we have suffered through horrible and heartbreaking events in our lives.

In the song itself, I sing from my mother’s point of view, so I am able to intermingle her emotions with mine as I tell the story of what happened to her.

JMA: What was the thought process behind you writing the powerful refrain in the song “If silence is golden then I know a lot of wealthy women, buying what’s been sold them, buy anything but freedom “?

KDP: A few years ago while we were on tour, I was sitting in our band’s van, somewhere in the middle of nowhere, and my bandmate Brian Elmquist was singing the words “Just enough to get by”, a line that he would always sing when he was jokingly referring to the usage of whiskey or some other vices.

For some reason, this particular time when I heard Brian sing that line all I could think about was my mom and some of the other women I had known that had been assaulted and how, like her, had never talked about it.

I also started thinking about how when I was growing up as a young girl, I was always being told by our culture at large that if you wanted to be a good woman you had to be a woman who always kept her mouth shut, who only spoke when she was spoken to and who was always careful not to seem too overbearing or intimidating. It was an insidious cultural lesson that I absorbed and internalized without even realizing it.

The refrain itself popped into my head, I think, because I was just feeling pretty lonely as a woman on the road traveling with my band. I didn’t know a lot of other women who were doing what I was doing and sometimes I just felt that people would rather me just shut up and sing than present any ideas that I may have. While I never got these vibes from my bandmates [Zach Williams and Brian Elmquist], mind you, I definitely picked up on them from the relentless and subliminal messages coming from every corner of the music industry encouraging you to remain silent.

I wrote the song a few years before the #MeToo movement and when that movement took hold, I was blown away, like most people were, by the sheer volume of things that had been kept secret by so many women over the years. The movement had a real effect upon me and helped me realize how important it is to say what I am trying to say with the song.

As a woman, it’s an everyday kind of battle to speak out or to speak up for yourself and to fight against the line of thinking that says you should remain silent.

JMA: Near the end of the song, referencing a part of your mother’s story, you sing the words:

“People will believe only what you let them see,

So, tell them what they want to hear,

how much better that you feel

And they’ll give you just enough to get by”

What is the meaning behind those words?

KDP: That’s my favorite part of the song. It’s about how, as women, we don’t want to make people feel uncomfortable with the pain that we may be feeling about our past or about the horrible things that may have happened to us. It’s also about how when you deal with people, you get what you give, in the sense that if you only give them a little of your truth, only give them a little of your vulnerability and only give them a sliver of what you’re going through, they’re only going to give you a polite smile and tell you it’ll be OK or whatever. All they’re ever going to give you emotionally is enough to help you eke out an existence, it’s never going to be enough to help you get better or well. They are going to give you just enough to get by as the title suggests.

So, basically, I think those lines are me saying to the listener don’t ever be afraid of telling people your truth, even if it makes them feel uncomfortable.

JMA: How would you like people to feel after hearing the song?

KDP: Although it’s a complex and complicated song, I want people to come away feeling uplifted and empowered because that is what I feel when I sing it.