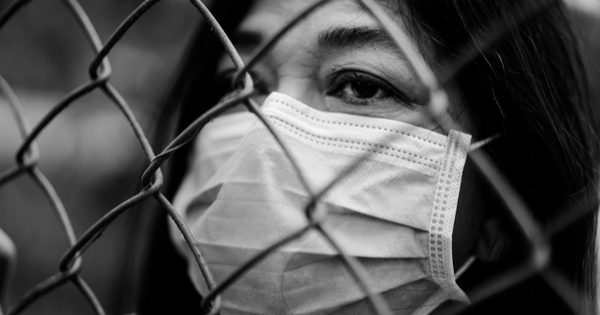 Put aside whatever you think about the dangerousness of Covid-19 for a second. We’ll come back to that, but for now, let’s imagine a scenario different from the one we currently face, in which the dangers were clear to all.

Let’s imagine, for instance, that there was a virus making its way across the country, which was so aerosolized that it could travel 100 yards from a carrier when breathed into the air. And let’s imagine that this virus was so lethal that, say, 10% of people infected with it would die. And let’s say that those who would die were not disproportionately older, or already ill from some preexisting condition, but spread randomly throughout the population.

Would people be out screaming about the “right” to go back to their jobs, and demanding that the state open up the economy after a month or so because they needed to feed their families?

Of course not, because everyone would be scared to return to work, and for most workplaces, there wouldn’t be much work to do, given the lack of customers and active commerce. So either you would work from home, assuming your job allowed it, or you wouldn’t work at all. The only people who would be working outside their homes would be delivery folks getting food and other items to people, and even then, only with head-to-toe PPE (probably akin to a spacesuit), and a hefty raise.

As for the rest of us, would we just starve? Let landlords throw us out of our homes because we couldn’t pay rent? Let banks foreclose on us because our mortgages went into default?

In that scenario, we would all be demanding — and would undoubtedly receive — massive government intervention: not a $1,200 one-time payment and some extended unemployment benefits for a few months, but sustained and substantial assistance to get us through the crisis.

We’d be demanding and receiving rent and mortgage freezes and the nationalization of payrolls, allowing us to be paid enough to buy food and other essential items until the danger passed. We’d be printing money, in effect, and distributing it to people to spend on those items, since they wouldn’t be earning a paycheck.

And you wouldn’t have to be a liberal or leftist to call for such things. Even the most libertarian-minded, big-government-hating conservatives would be joining in the chorus for state action.

Now I know, the Covid crisis is not as dangerous as the one I’m describing here, thankfully. My point in posing this alternative scenario is simply to make a note of the fact that if things were that bad, we would do something huge. We would not settle for one of the two choices we’re being asked to settle for now: Either go back to work and risk your life, or the life of a loved one in your home, or stay sheltered in place, go broke, and be unable to pay your bills.

The most generous answer is that Covid-19 isn’t nearly dangerous enough to warrant such unprecedented action.

All of which is to say that there is a third option. If that third option would exist in the nightmare scenario I sketch above, then it exists now too. The fact that we aren’t doing it, or anything like it, is not due to a lack of options but a lack of political will. At present, we do not care enough about the risks of Covid-19 to spend the kind of money and protect people financially and in terms of health, the way we would in the doomsday scenario I’ve offered here.

Which raises the question: Why not?

The most generous answer is that Covid-19 isn’t nearly dangerous enough to warrant such unprecedented action. And perhaps that’s true, for some. But it’s not true for everyone. For people with diabetes, heart disease, asthma, high blood pressure, and other preexisting conditions, Covid is clearly a risky proposition. So too for the elderly and for people of color and low-income folks who suffer disproportionately from the maladies mentioned above.

So when we refuse to take the kinds of significant actions that we could take — and would take if the risks were greater for everyone — we send an unambiguous message. That message is as simple as it is revealing: that the lives of those who are presently endangered are not that important to us. At the very least, we are saying that whatever value they have is insufficient to justify breaking with our anti-big-government mentality. We are saying that our ideological commitment to limited safety nets is more concretized than our commitment to preserving these lives.

In other words, we are saying that people of color matter less (racism), the poor and working-class matter less (classism), the elderly matter less (ageism), and those with a preexisting health condition matter less (ableism) than our philosophy about the role of the state, even in moments of crisis.

It’s a matter of saying that one is so committed to not having government help people, that they are willing to let lots of people die, just to avoid setting a precedent that might increase support for, God forbid, universal health care or better nutrition assistance.

Shorter version: We hate SNAP and Section 8 housing vouchers more than we hate losing another 100,000 or so American lives. Keeping our taxes low and not letting the occasional “undeserving” person game the system is more sacrosanct to us than the lives of those who will perish because we rush to open things back up.

Rather than moving slowly and paying people to get through the crisis using government funds — like Denmark is doing — we act as if the only choice is, as the saying goes, “your money or your life.” The fact that there is another choice, but we refuse to consider it, tells us a lot about America’s values — none of it good.

What it tells us is something black and brown folks always knew, even as most white Americans have denied it: namely, that we are a country divided not merely between the haves and have-nots, but between those deemed worthy of life itself and those deserving of death.

It has always been this way. And it always will be, until and unless we say enough.