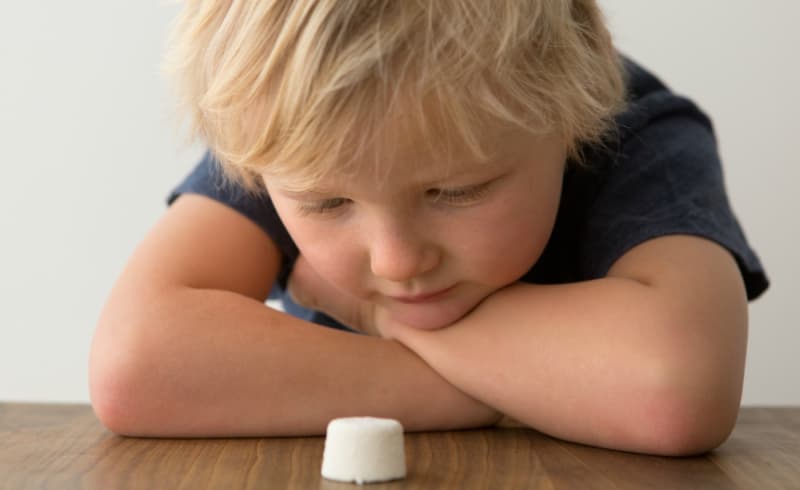 Can you solve this riddle and guess the next three letters?

If you’d like to know the answer immediately simply click here. However, before you do that, you also have a second option.

Instead, you can stick around to read the entire article, which will take about five minutes. But, if you do this, not only will the answer to the riddle be revealed, you are also guaranteed to be more successful in life!

What is the Marshmallow Test?

The Marshmallow Test is one of the most famous psychology experiments of all time. It has become part of folklore (well, maybe in some circles 🙂 ).

If you do a quick search on YouTube you’ll find some modern-day recreations of the famous test, which have millions of views. I’m not sure how scientific they are, but they make for some amusing videos.

The original Marshmallow Experiment was conducted in the 1960s by psychologist Walter Mischel at Stanford University.

The experiment involved a group of children who were all about four years old. These kids were each put in a room by themselves, where they were seated at a table with a marshmallow in front of them.

The supervisor then told them he had to leave the room to run an “errand”. But before he left, he offered the kids a deal.

If they could wait until he returned without eating the marshmallow, he would reward them with a second marshmallow. However if they chose to eat the marshmallow while he was gone, they would not receive the second one.

The researchers were interested to see which kids could resist the short-term temptation in order to receive the reward of a second marshmallow. It was intended as a test of impulse control and delayed gratification.

What were the findings?

In terms of the immediate test, about one-third of the children took the marshmallow almost as soon as the supervisor left the room. The remainder managed to resist for varying degrees of time.

Some of the children employed self-control tactics such as covering their eyes, singing to themselves and trying to go to sleep. Several of them managed to survive for a full 15 minutes before he returned.

Can you imagine? 15 minutes to a four-year-old must feel like a lifetime!

The interesting part came years later when the researchers tracked down the children from the original experiment.

They first checked in with the group as they were leaving high school.

What they found was that the children who had been able to resist eating the marshmallow at the age of four were now much better emotionally developed and were achieving better academic results.

Whereas the four-year-olds who had grabbed the marshmallow straight away now had higher levels of delinquency and much poorer academic results.

In fact, how children did on the marshmallow test at the age of four, proved to be twice as powerful a predictor of their SAT scores than how they did on an IQ test at age four.

But it didn’t stop there. They continued to follow these students for four decades and the same results were reflected all through their lives.

The delayed gratification of a marshmallow at age four was directly correlated to success forty years later in all areas of life including careers, marriages, finances and health.

Why would this be so?

If you think about it, it makes perfect sense. So much of what determines our long-term success requires the resistance of short-term gratification.

This is what Walter Mischel described as “goal-directed self-imposed delay of gratification”.

In other words, the ability to resist short-term impulses in order to achieve a longer-term goal.

It’s a concept that is very closely linked to GRIT.

Is the study still relevant?

It’s worth pointing out that the original study has since been discredited to some extent. The main criticism being that the sample size was too small. Also, it did not allow for socioeconomic differences, as the participants were all children of Stanford University students and staff.

Subsequent studies have added additional insights and shown that socioeconomic and environmental factors do in fact have an influence on how children perform in the marshmallow test. In particular, whether the children actually trust the tester when he tells them a reward will be forthcoming.

But whilst these subsequent studies have proven there are other factors involved, they have not contradicted the original proposition, which is that impulse control is a skill that can be linked to long-term success.

In today’s society, we live in a world of instant gratification. We have movies, music and contact with loved ones all available at the push of a button.

There’s very little that we are forced to wait for these days.

However, we all know that waiting for something is often what makes it more enjoyable.

Think about that joy you used to feel when Christmas finally arrived and you could open your presents. Think how much better beer tastes after a long week at work, or how much more intense the feeling of love is when you haven’t seen your partner for a few days or weeks.

It’s the wait and the anticipation that makes the reward so sweet. As Guinness drinkers will understand.

Are children born with impulse control?

It’s true. As with most personality traits, some children seem to be naturally gifted with a higher level of self-control from birth.

However, the follow-up studies clearly showed that environmental factors also have a big role to play and that impulse control can very easily be taught to children, even as young as four.

This is good news for us as parents, as we control the environment and have the ability to teach this skill to our children.

How can we teach our children delayed gratification?

In a society where kids have instant gratification at their fingertips, the ability for delayed gratification needs to be proactively taught by parents.

It requires discipline for sure.

If you’ve got a screaming child asking you to buy that present for them, the easy option is to just do it. But this represents short-term relief for long-term pain.

Likewise, if you make a promise to your child, then make sure you honor it. This will teach them that the rewards truly do come to those who wait.

Repeated broken promises are likely to teach children the opposite lesson – there’s no point waiting for a reward as it may not arrive.

Model discipline and be self-aware

Like most things in parenting, the example we set as a role model is the first step to helping our kids learn this skill.

And just as our kids are influenced by modern trends, so are we.

So, think of the ways in which you are NOT currently practicing delayed gratification.

Why not give yourself a few little challenges?

After all, how can we expect our kids to resist impulses if we can’t do it ourselves?

Give me that man that is not passion’s slave, and I will wear him in my heart’s core, in my heart of heart, as I do thee.

So, if you’ve slipped into some bad habits, now could be a good time to teach yourself a bit of impulse-control and in doing so, set a good example for your kids.

Don’t be a slave to passion – instead, be its master!

Be a wise parent and be proactive

As shown by the marshmallow test, the signs of impulse-control are demonstrated from a very young age. So be observant.

You might get lucky and have a child who is naturally blessed in this area. If so, the best thing you can do is to harness that skill and keep developing and rewarding it.

But also be on the lookout if your children are not displaying this skill. If so, take corrective action and try to find ways to teach (or reinforce) it.

Don’t worry. Just because your child has a passion for marshmallows at age four, doesn’t automatically condemn them to a lifetime of delinquency and failure.

Whilst early intervention is going to be easier, it’s never too late for kids, teenagers or adults to develop the skill of impulse control.

And if you are intentional and proactive, it’s actually quite easy to find opportunities to teach some delayed gratification.

Speaking of which, the answer to the riddle is l-t-d

* Each letter represents one note in the musical scale: Do, Re, Mi, Fa, Sol, La, Ti, Do

See – good things really do come to those who wait!

And as a further reward, here’s one of those youtube videos I mentioned earlier.

Enjoy… but don’t eat the marshmallow!!