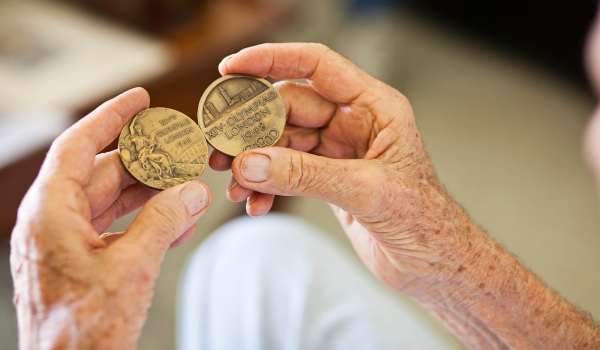 —
I’ve just finished reading Janie Hampton’s fascinating book ‘The Austerity Olympics’ which describes the events surrounding the London Games of 1948. The comment of Peter Kemp of BBC Radio 4’s Bookshelf, which appears on the back cover, prompted a rueful smile “it’s about putting on the Olympics in London during a financial crisis”.

Books like this, and contemporary accounts of the 1948 Olympics, reveal a world in which technological change was only just beginning to pick up pace. The Athletic Review’s Olympic Games souvenir designated the 1948 games ‘A boffin’s paradise’ on account of the new technology that was about to be applied to the events, notably a remote-control starting pistol (whatever happened to that?), photo-finish cameras, electronic timing and ‘walkie-talkie control of the marathon’ (coincidentally, the ‘boffin’s boffin’ – Alan Turing – was in the running for a place in the marathon: he had a personal best over this distance of 2 hrs.46).

This Olympics can also be said to have inaugurated the era of mass broadcasting of mega events. The BBC produced a special broadcasting handbook for the occasion, to be used by the large influx of foreign correspondents. It gave them useful information about the arrangements for booking microphones and studios as well as details of which bus to take to the sporting venues (“There are frequent trains from Marble Arch on the Central Line to Chancery Lane Station and thence by Trolley Bus (routes 517 and 617) to Finchley Open Air Pool”)

The BBC Yearbook of 1949 – looking back on the experience of the Olympics – thought the Corporation’s efforts represented “the most ambitious undertaking in broadcasting history” which involved the employment of 200 engineers, the erecting of broadcasting facilities at 25 venues, and a total of 130 commentary positions, 500 amplifiers and 150 microphones. Impressive, but these arrangements seem almost pre-historic compared to the media centres created for the London Olympics of 2012 and its immediate predecessors. These in their turn will probably seem ‘prehistoric’ to the Olympics consumers of the future.