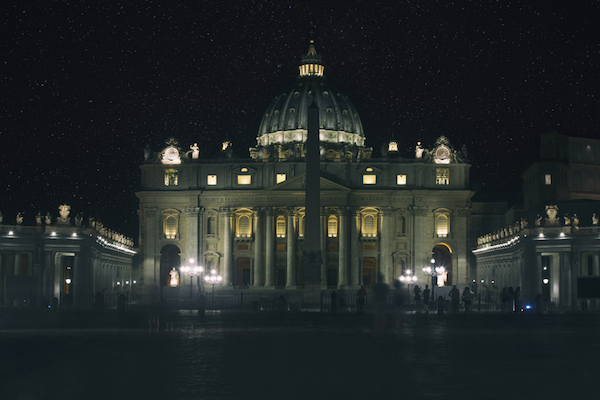 In architecture, the term “façade” often defines the exterior of a building, usually the front side. This “frontage” or “face” presents a more pleasant outward appearance than the other less visible sides and what lies immediately beneath to those who gaze upon it.

We can compare this face, this façade to the current human frontage of the Catholic Church in the figure of Pope Francis (Jorge Mario Bergoglio).

He entered his high position in March 2013 wearing a golden mask of liberalism and progressive policies that could have taken the Church out of the Middle Ages where it had remained entrenched. But alas, as time has rusted and stripped away Francis’s thin veneer, only the corpses of failed lies and bigotry remain.

For example, during an impromptu news conference aboard his papal jet on July 29, 2013, while returning to the Vatican from Brazil after completing his first international trip where he spoke to millions celebrating “World Youth Day,” he responded to a question about gay priests, and stated: “If someone is gay and he searches for the Lord and has goodwill, who am I to judge?”

For individuals within the Church who cannot or will not change to a heterosexual orientation, Catechism 2359:

Homosexual persons are called to chastity. By the virtues of self-mastery that teach them inner freedom, at times by the support of disinterested friendship, by prayer and sacramental grace, they can and should gradually and resolutely approach Christian perfection.

In his address in St. Peter’s Square, November 13, 2019, Francis condemned increasing violence against Jewish people across the globe.

He opined that the world has “seen so many brutalities done against the Jewish people, and we were convinced that this was over.” He warned, however:

But today the habit of persecuting Jews is beginning to be reborn.

He concluded with this admonition:

But today the habit of persecuting Jews is beginning to be reborn,” he said. “Brothers and sisters: this is neither human nor Christian; the Jews are our brothers and sisters and must not be persecuted! Understood?

Does Pope Francis not himself understand that much of the persecution, violence, and murder of Jewish people over the millennia has been justified by the Church’s false perennial narrative of Jews being responsible for the death of Jesus? It appears to the contrary since Francis recently invoked this tired myth in his defense of a Cardinal convicted of child sexual molestation.

A court jury found Australian Cardinal George Pell guilty in December 2018 of sexually abusing two 13-year-old choirboys at St. Patrick’s Cathedral in Melbourne. The incidents allegedly occurred in 1996 and 1997 following Sunday Mass. Pell was convicted of one charge of sexual penetration of a child and four charges of committing an act of indecency with or in the presence of a child. He was sentenced to a six-year person term.

Pell functioned previously as the archbishop of Melbourne and the Vatican’s treasurer who was one of Pope Francis’ most trusted advisors.

Australia’s High Court, however, recently unanimously overturned Pell’s conviction by issuing a statement that “there ought to have been a reasonable doubt” of the defendant’s guilt and concluded that there was not sufficient evidence to convict.

Following the acquittal, Francis praised the High Court and began his morning daily mass live-streamed from the Vatican’s Casa Santa Marta, the Pontiff’s residence by praying for “all persons who suffer an unjust sentence because of intransigence.”

During the mass, Francis compared the suffering of those inflicted with “unjust sentences” by raising how Jewish community elders supposedly persecuted Jesus with “obstinacy and rage even though he was innocent.”

Pope Pius IX, in 1858, kidnapped a young boy, Edgardo Mortara, from his Jewish parents in Bologna, Italy, and raised him in Rome as a Catholic against his parents’ wishes on the justification that a Catholic maidservant had secretly baptized the boy earlier when he was gravely ill. Pope Pius IX also referred to the Jews of Rome as “dogs.”

The Church has since admitted partial regret for many of the actions and words of former Popes. The Rev. Angelo Roncalli, who later became Pope John XXIII, was honored by Jewish leaders around the world for his work in saving large numbers of Jews during the German Holocaust.

As Pope, he convened the Second Vatican Council (1962-1965), which authorized the declaration Nostra Aetate and approved in 1965 under Pope Paul VI. An article in the document, while certainly not going far enough, stated:

True, authorities of the Jews and those who followed their lead pressed for the death of Christ; still, what happened in His passion cannot be blamed upon all the Jews then living, without distinction, nor upon the Jews of today.” Moreover, the Church “deplores the hatred, persecutions and displays of anti-Semitism directed against the Jews at any time and from any source.

Apparently, Pope Francis failed to read that memo. And the tarnish and rust has turned the Church’s façade to dust and has fully exposed the simple truth that the Church’s progressive architecture stands as a Medieval house of cards.

OUR CALLS ARE OPEN TO ALL PREMIUM MEMBERS AND WRITERS/CONTRIBUTORS/COLUMNISTS. Become a member for just $12 (limited time offer). Or join as a writer/contributor, here.

1. Free and UNLIMITED ACCESS to participate in ANY of our new Social Interest Groups. We have active communities of like-minded individuals working to change the world on important issues. Weekly facilitated calls that lead to the execution of real-world strategies for change. Complete schedule above, with new ones starting all the time. We now offer 500 calls a year!

2. Free and UNLIMITED ACCESS to ALL LIVE CLASSES. Learn how to build your own platform, be a better writer, become an editor, create social change. Check out our training sessions. As a Platinum member, you can take them all.

3. Invitation to the MEMBERS ONLY Good Men Project Community on Facebook. Connect with other members, network and carry the conversation no one else is having one step further.

4. Access to our PREMIUM MEMBER LIBRARY with our recorded ConvoCasts and classes. ConvoCasts are a new form of media—and you are in them! Only Platinum Members get access to our recordings. And recordings of our classes are really valuable for those who do not have time to take the live classes or just want to review.

5. An ad-free experience.No banner, pop-up, or video ads when you log in.

6. Weekly conference calls with the publisher and other community members. Our weekly calls discuss the issues we see happening in the world of men in a friendly group setting.

7. PLATINUM member commenting badge. Your comments on our website will appear with a platinum member badge, signifying you are a part of our core community.

Meet and network with others, get writing prompts and tips, get reminders and topics for our group call. Join our Writers Group on Facebook for details.