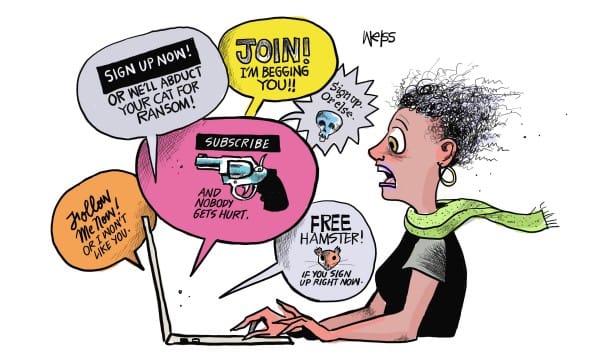 They say that imitation is the sincerest form of flattery. After all, if we go to the trouble to copy someone else, they must have something cool going on.

When Madonna came on the scene years ago, it wasn’t long before girls everywhere were dressing like her. Madonna had an original look, and fans couldn’t get enough of it.

The same held true for Michael Jackson fans. Everywhere you looked, you’d see dudes moon-walking. Or kids wearing big, oven mitt sized gloves on one of their hands. Michael was unique. He had a look, sound and style all his own. 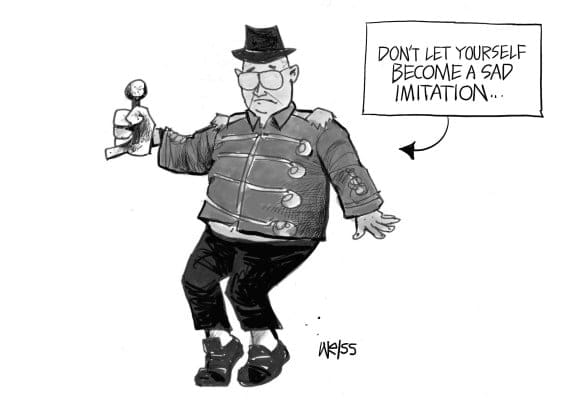 I know of a somewhat successful landscape painter who developed his entire style by copying a more notable painter.

Beginning artists and most lay people probably think the artist is great. However, most professional landscape painters and educated collectors can easily spot the artistic appropriation.

“It is better to fail in originality than to succeed in imitation.” — Herman Melville

We all want to be like our heroes. The problem is that our heroes are “one of a kind.” They stand out due to their uniqueness, talents and originality. We can’t copy our way to the top, we have to leverage our authentic selves.

Our challenge is to discover and develop our passions and talents. Then, we must find a way to originally and authentically share them with the world.

Figure out how to stand out

A lot of creative people hone their skills until they reach a point of proficiency or mastery. And then they stop.

Attaining a masterful level is important, because quality matters. But masterful execution of your creative work doesn’t assure that you’ll stand out.

There are a lot of phenomenal, highly skilled, atelier trained painters out there today. I’m happy about that, because the classical approach had been marginalized by the growth of abstract and modern art.

The only problem is that a lot of academic, atelier trained artists produce similar work. It all looks kinda the same. No doubt beautiful, skillfully rendered artwork, but not terribly original.

Seth Godin is a popular author, blogger and marketing expert. Forbes.com reviewed his book, Purple Cow: Transform Your Business by Being Remarkable, and noted the following:

Seth Godin says that the key to success is to find a way to stand out — to be the purple cow in a field of monochrome Holsteins.

If you want to be successful in life, you have to figure out how to stand out. It’s a noisy, frenetic world out there, and everyone is screaming, “Look at me!”

If Madonna and Michael Jackson had pursued more conventional images and songs, they probably wouldn’t have attained super-stardom.

Of course, being different for difference sake, is not enough. There are plenty of dreamers out there, acting bizarre and trying to shock us with their weird behavior, bad language or off the wall antics.

There has to be quality behind the originality. If Michael Jackson couldn’t dance and sing well, no amount of glitter and makeup would catapult him to fame.

So what do you need to do? Let’s say you have the talents and skills. How do you stand out?

It’s somewhat counterintuitive. Normally, we study how other people became successful, and then we try to follow the same path. It’s a logical strategy and to some degree, it works.

For example, maybe your sister has a terrific job at Google, working as a full-stack, computer programmer. She went to college and grad school, got her computer science degrees, and is now pulling down a six figure income.

Your sister’s path to success can be copied. In fact, a lot of people follow this educational path. Sure, for many there is student debt accrued, but they also land good jobs.

However, if you want to be that purple cow and stand out from everyone else, you need to bump it up a notch. That’s where “do the opposite” comes into play.

This short clip from Seinfield hysterically drives home the power of “do the opposite.”

I didn’t stand out at all

When I first got into blogging, I wanted to attract more followers. So, I studied what all the experts expoused.

I examined what top bloggers were doing. Everyone recommended having a “lead magnet” on your blog, which is basically some kind of bribe or free gift for signing up to your newsletter or email list.

I created two, free e-Books for new subscribers. I noticed a lot of bloggers using pop-ups, so I installed one on my blog, too. I bought a popular WordPress theme used by a top blogger, because I wanted to be successful like him. 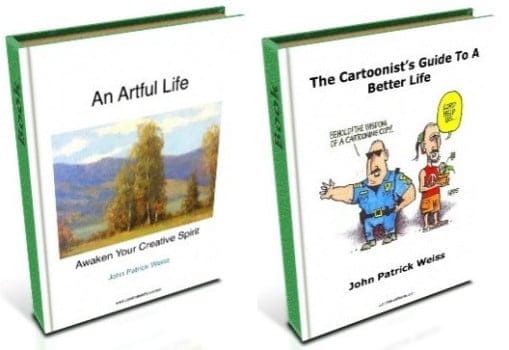 The free eBooks I used to entice subscribers with.

Before long, my blog had all the bells and whistles, but it also looked exactly like everyone else’s blog. I didn’t stand out at all. I blended into the landscape of similarity and mediocrity.

My blog posts were also fashioned like all the top bloggers. I incorporated those infernal listicles and bullet points. I started sharing the same kind of advice as everyone else.

In my desire to be like other top bloggers, I forgot about my own unique experiences and authenticity.

I got a few hundred followers, but I think they just signed up because they felt sorry for me. Eventually, I came to terms with the fact that I was just like every other aspiring blogger. I was unoriginal and boring. Definitely not a purple cow.

Do what you can’t

One day I finally decided to ignore all the gurus. The minimalist in me hated pop-ups, busy website design, and obnoxious gimmicks to lure readers in. I redesigned my website with more white space and less noisy distraction.

I dumped the lead magnets, free stuff, pop-ups and give-a-ways. I focused on improving my writing by hiring a coach. I did a lot of thinking about what I wanted to do with my blogging.

A lot of bloggers add taglines that say, “I help people to…” They were taught by other bloggers and experts that in order to succeed in blogging, you have to solve other people’s problems.

No doubt, writing useful content to help people solve problems, will attract some attention. Especially if you have strong qualifications and experience to back up the advice and solutions you offer.

What I realized, however, is that you can also entertain people with your blogging. Some of my favorite blogs don’t “solve problems” for me. They entertain me. They fascinate or inspire me. 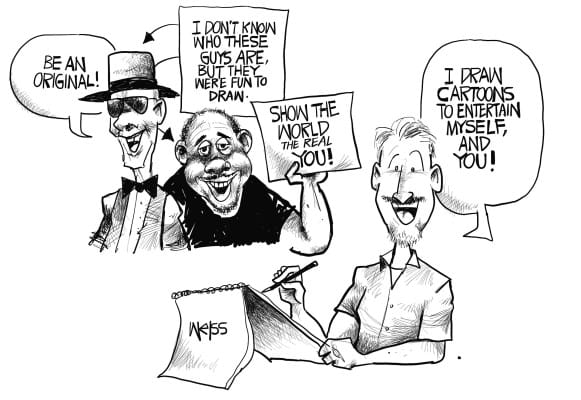 What he doesn’t do is hit you over the head with lame pop-ups, or pleas to subscribe by offering a free eBook or file download. He doesn’t anesthetize you with listicles or re-tread articles telling you to get up early or eat more kale.

Instead, he entertains us. Casey Neistat stands out because he’s an original and his videos are cool to watch. Sure, he slips in some great messages here and there, so in a way, he’s helping us. But mostly, he’s entertaining and inspiring us.

Check out this awesome video Casey did titled, “Do what you can’t.”

Casey Neistat is definitely an original. Even his website breaks from what everyone else is doing. Talk about minimalism!

There are some things in life that we should all be doing. Treat people with kindness and dignity. Pull our own weight. Be there for our kids. Obviously, if everyone else is being thoughtful and kind, that doesn’t mean we should be thoughtless and mean.

However, in so many aspects of our lives, if we did the opposite, we’d probably grow considerably. We’d move closer to our goals.

Author Steve Sample, from his bestselling book, The Contrarian’s Guide to Leadership, has this to say:

Aristotle noted that, when carpenters wish to straighten a warped board, they don’t put it in a jig that simply holds it straight; rather they put it in a jig that bends it in the opposite direction from that in which it is warped. After a week or two in this reverse-bending configuration, the board naturally springs back to a straight shape when it is released from the jig.

Think about what your life would look like if you did the opposite of some things. Instead of vegging out on the couch, do the opposite: go work out. 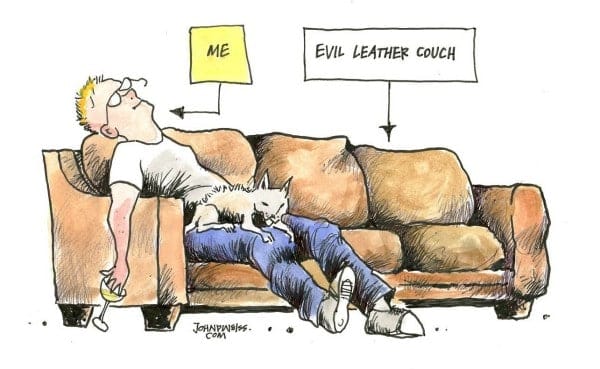 Don’t get seduced by the couch! Go do something cool!

Do the opposite at work. While everyone else is bitching about the job or the boss, why don’t you double down and get more work done?

Stand out from the crowd. Not because you’re a brown noser to the boss, but because no one else is putting in a stand out effort. Whether you love or hate your boss or job, doing the opposite of whining and minimal effort will get you ahead.

How about that blog of yours? Why not redesign it so it doesn’t look at all like everyone else’s blog? Adopt a minimalistic look, or maybe a totally unique, new design.

As a creative, consider the work you’re producing. Does it stand out? If not, try doing the opposite of what you’re currently doing. Switch things up.

Color cartoons probably stand out more on-line. But I’m doing the opposite. Maybe my cartoons will stand out more, because they don’t look like all the colorized cartoons?

Speaking of cartoons, they were part of my solution for more original, authentic blogging. I started to illustrate my own articles, instead of using the Unsplash stock photos that everyone else is using.

Bam! When I began adding my own cartoons to blog posts, they immediately stood out more. In my blind efforts to copy top bloggers, I forgot all about my own, unique talents. Like cartooning. 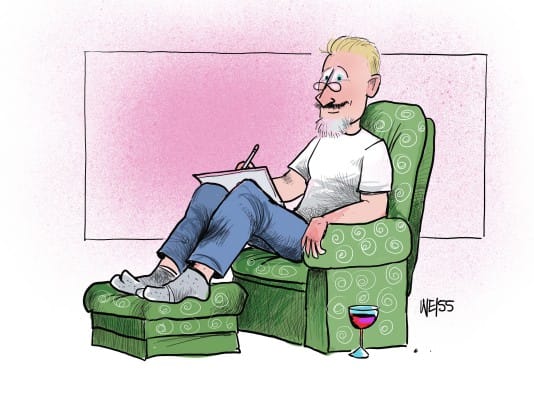 How about you? What unique talents or unexpected skills could you bring to your digital life? What could you be doing that nobody else is doing?

Experiment. Try new things. Don’t be afraid to risk. If you crash and burn, maybe you’ll lose some fans. Just dust yourself off, and try again. Next week, the new stuff you try just might attract a whole new group of fans.

Take Casey Neistat’s advice and “do what you can’t.” Also, learn to embrace the three words you need to know for greater success:

You just might start something big. Something original. Something authentic, and totally you. How cool that would be! 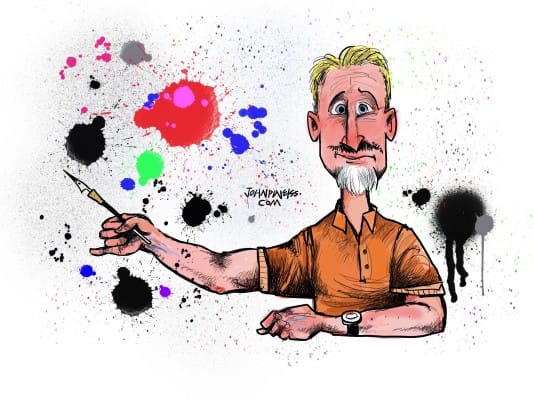 I’m John P. Weiss. Fine artist and writer. Get on my free email list here and I’ll send you the latest cartoons, artwork and musings.

This post was previously published on Personal Growth and is republished here with permission from the author.