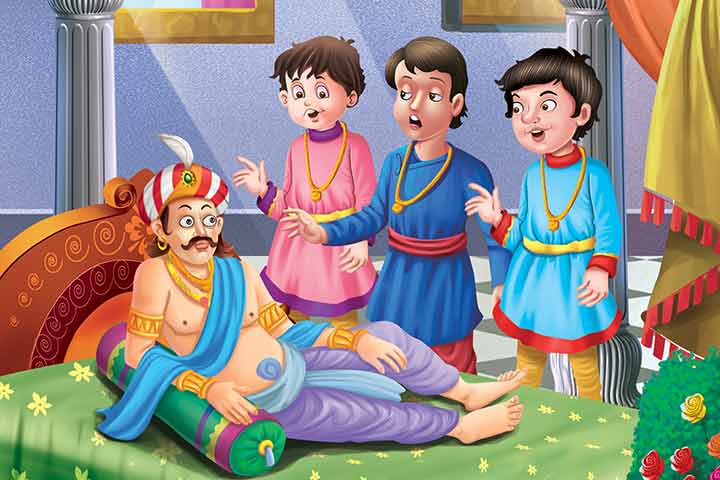 One night, king Sri Krishnadevaraya had a strange dream. He dreamt of a magical palace that floated in air. It was made of gold and dazzling stones, and had all comforts and amenities. The king woke up and couldn’t stop thinking about his dream.

He shared his dream with his courtiers, and all of them praised his dream and agreed that it was indeed a magnificent palace. Then the king said, “I will give a thousand gold coins to whoever builds such a palace.”

Everyone in the court was dumbstruck at the king’s announcement, as they all knew that building such a palace was impossible. None of them, however, dared to tell that to him.

The courtiers went to Tenali Rama for help, as they knew what the consequences would be if they dared to disobey the king. After hearing everything, Tenali Rama assured them that he would help them.

The next day, when Sri Krishnadevaraya was sitting in his court, an old man came crying to him for justice.

The king asked, “What happened, my good man, why are you crying?”

To this, the old man replied, “Your majesty, I need justice, as I have been robbed of all my life’s savings.”

Then the king asked, “Who had robbed you? Tell me, and I will make sure you get justice.”

The old man hesitated a bit and said, “Your majesty, I will tell you his name, but promise me that upon hearing his name, you would not get angry and punish me.”

“Yes! I give you my word. Now tell me who robbed you,” replied the king.

The old man then, with his voice trembling, said, “It is you, your majesty. I was robbed by you.”

“Are you out of your mind, old man?” roared the king. He was about to punish the old man, but he remembered his promise and calmed down. He asked the old man to explain what he meant by it.

The old man said, “Your majesty, I had a dream last night. You, along with your thousands of soldiers, came to my house and looted my entire life’s savings.”

Hearing this, the king lost his patience and angrily said, “Are you insane, old man? It is your dream, and dreams do not come true.”

“But your majesty, if your dream of building a hanging palace can come true, then why can’t mine?” asked the old man in a calm and assertive voice.

Saying these words, the old man took off his disguise, and the whole courtroom gasped, as the old man was none other than Tenali Rama.

He then bowed before the king and said. “Your majesty, apologies for taking such liberty, but this was the only way to convince you that your dream was far from reality.”

The king understood his mistake and praised Tenali Rama for his intelligence.

Do not encourage foolish talk, make them see the point.