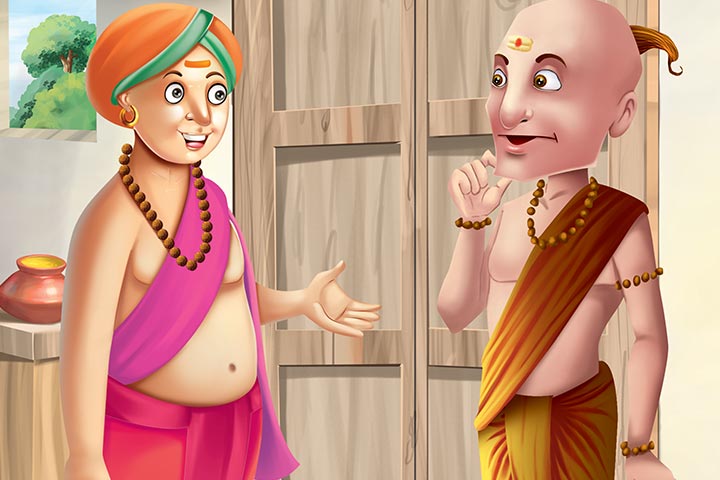 One day, Tenali Ramakrishna came to the realization that the royal teacher Tathacharya had been envying his achievements and plotting against him. Rama has been wanting to teach him a lesson, but couldn’t as he thought that it was not wise to go head-on with a senior in the court.

Rama decided to take on the royal priest with intelligence. He thought hard and devised a plan to teach Tathacharya a lesson. But, first, he would need to know Tathacharya’s weaknesses.

So, one day, he approached Bhadrudu, the night watchman at Tathacharya’s residence. Rama took out a small package from his dhoti, showed it to Bhadrudu, and said, “Bhadrudu, I will give you 100 varahas if you give me some information.”

Bhadrudu’s eye glistened on seeing the package as it was equivalent to two months of his salary. He began imagining the things he could do with that money. His thoughts came to a halt when Rama said, “What’s the matter, Bhadradu? You seem lost.”

Bhadrudu came to his senses, and replied, “It’s nothing, pandit Rama. Please tell me what I can do for you.”

Rama replied, “Nothing important, I need to know what the guruji usually does after dusk.” Saying this, he tossed the package towards Bhadrudu.

Bhadrudu caught the package and replied in a humble tone, “There is no particular schedule, but twice a week, master would go towards the East street at night and return during the early hours the next day. Today is one such day.”

“Thank you for the information, Bhadrudu. Please keep our meeting to yourself.” Saying this, Rama left the place. As Bhadrudu did not sense any wrong intentions in Rama, he did not reveal this encounter to Tathacharya.

That night, Rama reached East street before Tathacharya did. He hid behind a banyan tree and waited for Tathacharya. After some time, Rama saw Tathacharya entering the street. He quietly followed Tathacharya, and to his amazement, Tathacharya headed straight towards a  gambling house.

Rama thought to himself, “This is what I wanted.” Just before dawn, Tathacharya came out of the house.

Rama immediately ran to him and said, “Good morning, Tathacharya! I am surprised to see you here at this hour. Now I know the true meaning of the saying ‘Demons chant hymns.”

Tathacharya was startled to see Rama, but acted normal and said, “Hello Rama, good morning! It is nice to see you.”

Rama understood that Tathacharya was intentionally hiding his deeds, so, he said, “Tathacharya, I never thought you would do such a thing. I will reveal your little secret to everyone.”

Tathacharya shivered and said, “My dear Rama, please do not do such a thing. I will do whatever you say.”

Rama was happy that he had achieved what he wanted. He replied, “Master, I always wanted to sit on your shoulders. Please carry me on your shoulders, and I will forget everything about this incident.”

Thathacharya said to himself, “This Rama is quite clever. If I do not do whatever he says, he will expose me to the king. I will lose all my reputation, and the king might even punish me.”

Reluctantly, Tathacharya agreed and carried Tenali Rama on his shoulders. Just as they were passing by the palace, the king, who was strolling in the balcony, spotted the two men. Immediately, he called out, “Guards! Look at that man carrying another man on his shoulders. Bring the person sitting on the shoulders to me. And do not forget to give him a good pounding.”

Rama, who had this planned out, noticed the guards coming towards them and said, “Tathacharya, please accept my apologies. I have made a huge mistake by riding on your shoulders. Now, I want to punish myself by carrying you on my shoulders.” Although Tathacharya was reluctant, Rama convinced him and started walking, carrying the royal priest on his shoulders.

The guards pulled down Tathacharya from Rama’s shoulders and said it was the king’s order to bring them to his presence. They dragged Tathacharya to the king, all the way hitting and kicking him.

The king was surprised to see that the man the guards have brought was none other than Tathacharya. He immediately turned towards the guards and said, “You fools! What did I tell you, and what have you done! Why did you bring respected Thathacharya? I will have you beheaded for offending the royal priest.”

The guards shivered and pleaded, “Your majesty, we did exactly what you said. It was Tathacharya who was riding on Tenali Rama’s shoulders.”

The king then asked Tathacharya if it was true. Thathacharya was in trouble now. Although he wanted to see the guards punished, he could not tell the truth because the king might come to know about his secret. So, he said, “Yes, your majesty, it was I who was riding on Rama’s shoulders.”

The king let the two guards go. Although he was curious to know why Rama was carrying Tathacharya on his shoulders, he did not want to trouble the injured royal priest further, so he let him go.

Rama was glad that he was able to teach Taathacharya a lesson.

Do not be jealous of another person’s achievements.

Tenali Rama And Soldiers Around The Campfire