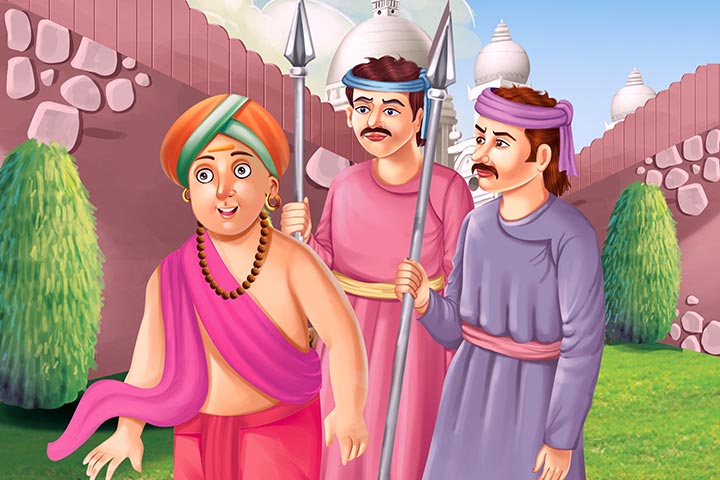 Although Tenali Rama was dear to king Sri Krishnadevaraya, at times, when he disagreed with him, the king would get enraged and punish him for disobedience. Here is a story that tells us how Rama escaped the king’s rage, using his intelligence.

One day, there was a clash of opinions between king Sri Krishnadevaraya and Tenali Rama. Out of anger, the king ordered the guards to behead Rama with a single stroke of the sword.

Two guards took Rama to the riverfront to execute him.

When it was time for the execution, the two guards got into a heated argument over who should perform the task. Rama intervened and suggested, “Why don’t both of you strike together?” The guards agreed to this and made Rama stand knee-deep in the river.

As the guards raised their swords, Rama shouted, “Wait! I have one last wish.”

The guards lowered their swords and asked what his last wish was. Rama replied, “I want you to strike me as I take Ma Kali’s name.” The guards agreed to this.

Rama held his breath and shouted, “Jai Ma Kali!” as soon as the swords were about to strike his neck, Rama quickly immersed himself in the water. The swords missed Rama’s neck and clashed with each other.

As the guards were readying to strike again, Rama said, “The majesty’s order for you was to strike only once. Now that you have missed once, you cannot attempt again.”

The guards were caught in a dilemma. Just then, a messenger from the palace came with orders to stop the execution and bring Rama back to the palace. As Raman stepped into the palace, the king embraced him and apologized for his outburst.