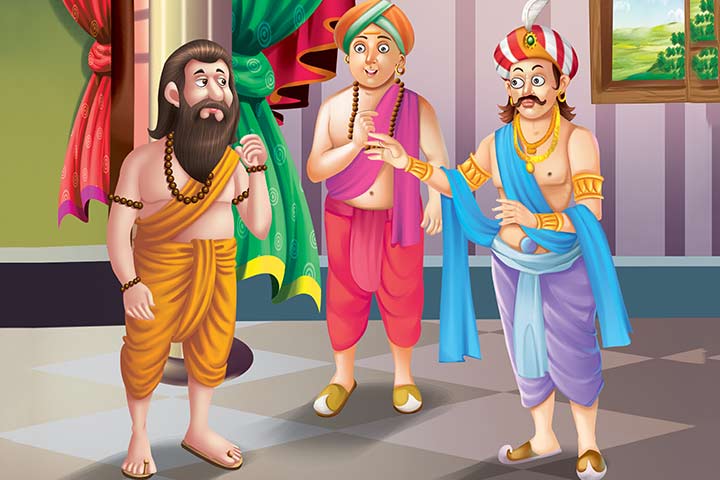 One day, a great scholar came to Vijayanagara and requested for an audience in the court of Sri Krishnadevaraya. The scholar bragged that he has mastered all subjects and also defeated many scholars in a battle of wits across India. There was no pundit (a learned person) in India who could beat him.

Saying so, he challenged Sri Krishnadevaraya for a battle of wits with his esteemed eight poets. The king accepted the challenge and started the battle of wits. All the poets were getting defeated one after the other, and the scholar seemed to know every subject.

At last, it was Tenali Rama’s turn. He took out a book covered in yellow silk cloth and said, “Oh, great scholar! Let us have a debate on any topic you choose from this great piece of literature called Thilaka Mahista Bandhanam.”

The pundit was startled; he has read thousands of books in several languages but never heard about this book. He bowed his head in defeat and left the court.

Sri Krishnadevaraya was joyous because Tenali Rama had saved the reputation of his court. At the same time, he was curious about that piece of literature. After facilitating and rewarding Tenali Raman, the king asked him what Thilaka Mahista Bandhanam was.

Rama laughed and removed the silk cloth. To everyone’s surprise, it was not a book, but a bundle of twigs tied with a rope to appear like a book.

“This rope is used to tie oxen, which makes it ‘mahisha bandhana’ as ‘mahisha’ means ox and ‘bandhana’ means to bind.”

“I just used the Sanskrit names of all these things, and the pandit got scared thinking that this was some unknown piece of literature.”

The whole court burst out laughing, and Sri Krishnadevaraya praised Tenali Rama for his wit and humor.

Do not be arrogant about knowing everything. There is definitely something that you do not know.