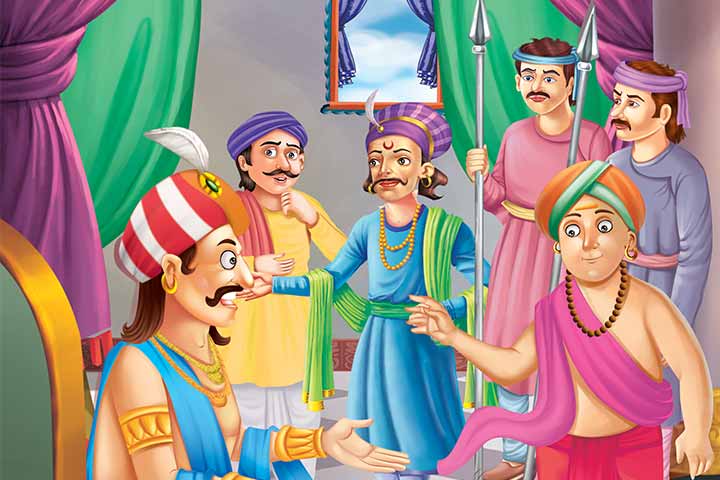 The news that the guards in the king’s palace were resorting to bribery troubled Tenali Ramakrishna. He wanted to bring it to the king’s notice but could not tell him directly as the king trusted his guards. So, he kept waiting for a golden opportunity to expose the guards.

One day, a special dance troupe came to entertain the king. He was seated in his private chambers and ordered his guards that no one should disturb him. Tenali Ramakrishna heard about this and got an idea. He tried to rush into the king’s private chambers.

The guard stopped him saying, “You cannot go in pundit Rama. The king has ordered that no one should disturb him.”

Rama then replied, “The king has promised me a hefty reward. If you let me in, I will give you half of the reward.”

The corrupt guard agreed to this and let Rama in. A guard at the entrance of the hall also fell into Rama’s trap.

Upon entering the king’s chamber, Rama took out a stick and started to beat the dancers. The king was startled and asked Rama for an explanation for his irrational behavior.

Rama deliberately kept quiet. This made the king furious, and he ordered 50 whiplashes as a punishment. Just when the punishment was about to begin, Rama stopped the guard and said, “Your majesty, I have two of my friends who are willing to share the lashes along with me.”

The king was surprised and wanted to know who these fools were. He ordered the guards to fetch the two men.

As soon as the guards appeared with the two men, the king asked them if they agreed to share the rewards Tenali Rama would be receiving.

Unaware of what the reward was, both the guards said, “Yes, your majesty.” Then the king asked Rama why he had made such a promise. Rama replied, “Your majesty, I made them this offer to let me in. Despite your orders to not be disturbed, they agreed.”

The king understood that his guards had taken a bribe and punished them. He then thanked Tenali Rama for bringing out the rampant corruption to light.

Never fall for greed and compromise on your duties.