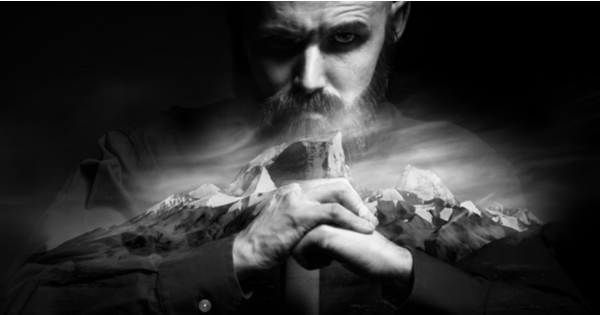 I doubt women will ever transcend their predilection for strong men.

“Enjoyers of calms of seas and storms of seas,

Passers and contemplators of tufts, blossoms, shells of the shore,

Dancers at wedding-dances, kissers of brides,

Men who know how to calm the storms inside them and simmer in self-awareness. Whose self-understanding leads to assertiveness rather than sulking, sniveling, or slamming doors. Who wrestle with their inner darkness and transmute it into light.

Daring men… welcoming storms to prove their worth and mettle and to steel their resolve. The ones Rudyard Kipling said can dream, and not make dreams their master; who can meet with Triumph and Disaster and treat those two impostors just the same. Who can make one heap of all their winnings and risk it on one turn of pitch-and-toss, and lose, and start again at their beginnings, and never breathe a word about their loss.

Men in touch with their sensual selves; fleshy and incarnate. Lovers and contemplators of nature. Dancers and Wild men!

Vertebrates! The men described by G.K. Chesterton as having their softness on the surface and their toughness in the middle. Unlike modern cowards, he said, who are all crustaceans; their hardness on the cover but all soft inside.

Cycle Breakers! Men who refuse to perpetuate their forebears’ pattern of abuse, neglect, addiction, and harmful notions of masculinity, and, instead, evolve their own, giving birth to a new generation of men — of leaders, husbands, and fathers.

Men who are unafraid of making commitments — to women, family, children, community, and their personal ideals. Who would rather die than sacrifice those ideals; the likes of Jesus, Socrates, Giordano Bruno and Thomas Moore. The great warrior bees in our human story.

Men unafraid of strong, independent women, and those who instead of seeking the ideal in fantasy, dare to tussle with a woman of flesh and blood, furor and tears, scars and wrinkles, and a fractured but ultimately endearing humanity.

Tender and egalitarian. Men who return home exhausted after a day out on the battlefield yet eager and willing to cradle their children, prepare dinner, and open their ears and hearts to their wife’s sorrows.

Defiant men! Who regardless of how steep the ascent or how often or hard they fall, pick themselves up, wipe blood and sweat off their face, cast a defiant glance at the summit and ask, “Is that all you’ve got?” before resuming the ascent.

Men who still shudder in the face of suffering and injustice; who haven’t numbed their sensitivity to the pain of the world and dare move from anger and indignation to spirited action.

Soulful men! Less concerned about amassing muscle or wealth, and more on leaving a lasting legacy.

Regal Kings! Bringing order to the realm. Reasonable and rational. Centered and calm. Living the order of their own life. Seeing others in all their weakness and in all their talent and worth, guiding and nurturing them towards their own fullness of being. Envying none because they are secure in their own worth.

Fierce Warriors! Full of vital energy. Full of thunder and lightning. Committed to a cause greater than themselves. Disciplined. Exercising inner and outer control, with actions never overdone.

Wizards! Initiating others, especially the young, by sharing their wisdom with a lavish soul. Aware and insightful and with a keen understanding of the hidden dynamics of the human psyche.

Swift and Majestic Men! Where are you?

In an orchestra, the oboe is the instrument to which other instruments are tuned.

Meanwhile, lily-livered sycophants, chest-thumping bullies, pervs, creeps, highchair tyrants and silver-tongued villains are taking over the world and making a mockery of all men.

The dispassionate, post-modern, cool man is the antithesis of the phallic male — no passion, no standing forth, no risk, no Eros, no drive to enrich history. Nor is the new-age man who is self-absorbed in his own feelings and committed only to personal growth a candidate for heroism. It is an illusion to believe that the virility men have lost can be recovered by anything except a new vocational passion. Become fierce gentlemen! — Sam Keen, ‘Fire in the Belly.’

Civilizations die from suicide, not by murder, said Arnold Toynbee, and a civilization that continues to produce soft-minded men, warned Martin Luther King Jr., purchases its own spiritual death on the installment plan.

Either rise or step aside and let women take the wheel.