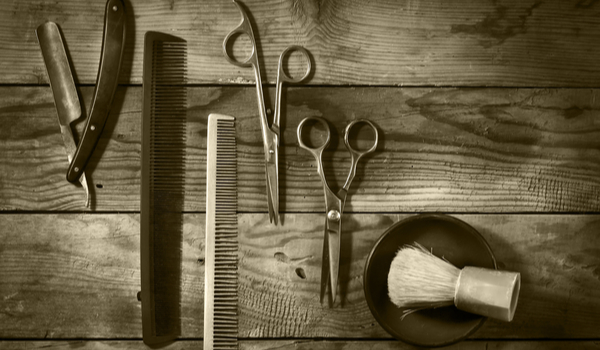 To make a fine gentleman, several trades are required, but chiefly a barber.

With China dominating the news of late, first with the protests in Hong Kong and now with the start and spread of the coronavirus, I find myself thinking more and more about my father-in-law.  He was born in China, in 1924, in a small village in a northern province.  Intelligent, strong, tall, and handsome, he had every expectation to build a secure and successful life in the country of his birth.

Yet like many Chinese people of his generation, the communist revolution changed the arc of his story.  Starting in 1946, after the defeat of the occupying Japanese forces, the Mao-led Red Army and the Kumington, the ruling Nationalist Party, fought bitterly for control of the country.  With the communists sweeping through the rural areas and forcibly conscripting men and women to fight on their side, often sending them into battle with no training or adequate arms to defend themselves, the chances of survival for someone like my father-in-law was slim.

But he had one chance to take safe haven.  Not long before the uprising, he had spent time in Shanghai, apprenticing at a barber shop owned by a family friend.   With the idea that he would return to his hometown once the fighting ended and political stability in the country restored, he returned to Shanghai to work.  But the situation changed quickly – the communists were victorious, and my father-in-law was essentially declared an outlaw with a death sentence placed on his head if he should ever return.

With time ticking and his life in danger, he fled to Taiwan.  To make ends meet, he worked for others as a barber until an opportunity arose for him to open a high-end shop within one of the first (and most prominent) western hotels in Taipei.  And it was there that my father-in-law made his reputation and gained notoriety by offering a unique service to customers – the Shanghai Cut.

I learned all this from my wife, who told me one night, some years back, when her father was visiting us in the states.  We were readying for bed in our room, and he was downstairs, on the floor below.  I could hear him sleeping, his light snores, as we  talked.

“You know, he never passed on his skill,” my wife said.  “The Shanghai Cut.”

My interest was piqued immediately.

She then explained his history, how he had escaped the communists and immigrated to Taiwan.  But she also told me about Shanghai, a city reputed to have the very best barbers in Asia.  “Shanghai was known for three cuts,” she said, making three chopping motions with her right hand.  “Chef, tailor, and barber.  You know – cutting food, cutting cloth, and cutting hair.”

“Cut and knife means the same in Chinese,” she continued.  “We say that scissors are like two knives together.”

“What’s the Shanghai Cut look like?” I had asked.

“It’s very conservative.  My father said you must be able to cut right down to the roots, so the hair will stay neat and in place, even in a typhoon.  But that wasn’t all.  As part of the cut, customers also received a hair wash, massage, facial, shave, manicure, and ear-cleaning.  It was meticulous.  Not like today.  Nothing was rushed.”

I remember how her words resonated with me.  How just a few days before I had gone to a hair salon, a nationwide chain charging twenty-five bucks for a shampoo and cut.   A woman in her early twenties with a tattooed neck finished my hair in five minutes, snapping her bubble gum the whole time while raking an electric razor over my head.

“His customers loved him.  He was famous in Taiwan because he had very important clients:  celebrities, politicians, businessmen.  They never went to any other barber but my father.”

“And he never passed it on,  the Shanghai Cut?”

“Because the style isn’t popular anymore.  Young people don’t want to learn something only a few old people want.  My father had to apprentice more than three years in Shanghai before he could start his business in Taiwan.  Who has that much time and patience nowadays?”

I got it then.  And I still get it.  We are a society in a hurry, busy and distracted, flitting from one task to the next.

“Maybe one day he could teach me,” I had said.  “If I have time, and we’re together.  You could translate.  I would like that.”

But it never happened.   There never seemed to be the right time, or enough time, and then my father-in-law passed, at the age of 94.

Yet, the fantasy of carrying on his legacy remains.   I imagine owning an old-fashioned, luxurious barbershop like his, with gold-plated chairs and white porcelain sinks with smooth ivory handles.  I see smoked-glass mirrors lining the walls, and a glistening parquet floor underfoot.  A thick-glass parfait on a polished marble shelf holds a spray of black plastic combs drowning in green-dyed antiseptic.  Next to it is an opened teak carrying case, my scissors and razors, each shined and sharpened to perfection, gleaming atop the blue velvet lining.

As for my dress, I am  wearing a white cotton smock over a navy dress shirt, its starched collar snugged smartly by a silken tie.  My slacks are pleated and made of gray flannel, the cuffs tapering gracefully into a pair of newly buffed, brown loafers.  In my lapel sprouts a single red poppy, and my lone jewelry is a sparkling, silver-banded wristwatch that clinks and clacks as I snap a mahogany-handled whiskbroom across the already spotless floor.

And when the first customer of the day comes through the door, a debonair looking gentleman in a somber three-piece suit with matching wingtips, I bow slightly, guiding him to the chair with a confident hand, calmly awaiting his request for the Shanghai Cut.