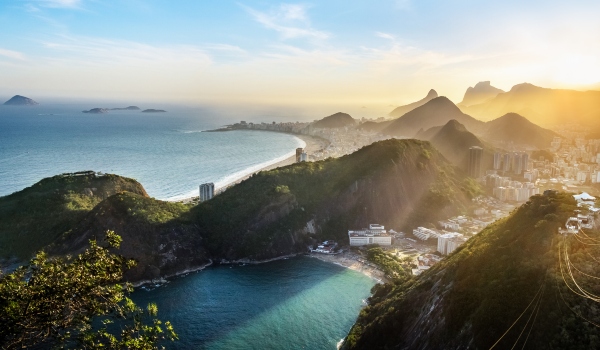 SAO PAULO – From a distance the favelas, or shantytowns, of Rio can look colourful and picturesque, clinging to the steep sides of the mountains which rise above the beaches. Some have even been added to the itinerary of the more adventurous tourist.

But for the millions who live in them, they can also be places of danger, fear and violence, because of the drug cartels which control them. They are also places of insalubrity and disease, with open sewers, precarious water supplies and overcrowding.

Among the tiny brick houses, crammed one on top of the other, there is no room for trees, gardens, plants or beauty. As they have advanced ever further up the slopes and into the mountains, any remaining vegetation has been chopped down, paving the way for lethal mudslides when the torrential rains of summer strike.

There are an estimated 700 favelas in Rio, home to over a million of the city’s six million people. Global warming is expected to hit the poorest hardest, producing more extreme events like violent rainstorms. Favela dwellers are always the first victims of such downpours.

The Rio authorities have begun efforts to change this scenario, first with a programme of “pacification” – expelling the drug gangs and their militias and establishing community police bases.

This has allowed all the normal services enjoyed by other Rio inhabitants – rubbish collection, regular electricity and sewage and water services, and postal deliveries – to be installed.

The normalization of shantytown life has also permitted the beginning of an ambitious project to turn the cramped favelas with their narrow alleys into “green communities”.

The brainchild of Rio`s environmental department, working with a local NGO, the aim is to plant 34 million trees and plants in shantytowns over the next three years, not only to prevent future mudslides, but to provide jobs and incomes for some of the residents.

The project began in November 2012. Four communities in different parts of the city were chosen as pilot projects: Batan, in the Bangu district, Fogueteiro, in the central district of Santa Teresa, Formiga, in Tijuca, and in the huge sprawling Complexo do Alemão, which spreads over the districts of Bonsucesso, Ramos and Olaria.

These communities have not only been “pacified”, they have space for large-scale planting. Residents who volunteered have been training as community gardeners. Besides planting techniques, the gardeners learn how to plan the landscaping project in each shantytown.

They will also be expected to pass on their new awareness of the environment to the other residents. The plants grown in the shantytown nurseries will be transplanted to the bare hillsides, not only to stop erosion but to improve the microclimate in the favela.

“We want to put green roofs on the houses to reduce the temperature, and plant vegetable gardens”, he says. “We want to reforest the slopes with fruit trees to attract birds, instead of having this dry, cracked earth, which whenever it rains can start landslides.”

Minc said they will use abandoned parts of the shantytowns that were previously used as rubbish dumps and as scrapyards for stolen cars: “The idea is to take an abandoned area and transform it into a social meeting place, with lovely gardens and nurseries.” This, he believes will also help to diminish the day-to-day violence in the communities.

By the end of the first four-month course in the favela of Fogueteiro, the new gardeners had planted 540 trees, all native species, and had also started producing vegetables and salad greens.

Once it gets going, the project has wider ambitions, says Ingrid Gerolimich, the Rio environmental department’s project coordinator. She wants the community gardeners to learn all the stages of the process, from growing the plants to their commercialization, and to form cooperatives.

Besides the environmental aim, there is a social aim – the generation of jobs and income. She explained: “There is a space for improving the technical ability of the people involved in planting the saplings and in producing ornamental plants. We want to have partnerships with the big hotel chains, so we can supply them.”

For the moment, the emphasis is still on recruiting and training the community gardeners -120 are needed for the four chosen shantytowns in the first stage of the project. Those that complete the course will then earn a monthly wage of £40, for what, at first, will be a part-time job.

If this ambitious and innovative project works it could be copied in other Brazilian cities. But it is early days, and it will depend a lot on the continuing support of the authorities, whoever wins the next elections, and on the enthusiasm and involvement of the shantytown populations themselves. – Climate News Network