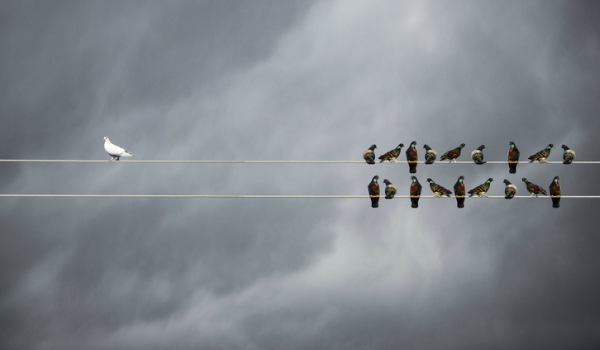 For years people have debated whether Donald Trump is a racist.

For some, the answer was always an obvious yes. When you launch your campaign by calling Mexican immigrants rapists and drug dealers, claim a Mexican American judge can’t fairly adjudicate a lawsuit against you because of his ethnicity, call African nations “shitholes,” and suggest we need more immigrants from Norway and fewer from Haiti or Central America, you’ve earned the title. To say nothing of soft-pedaling Nazis in Charlottesville, of course.

The evidence of Trump’s racial bias is clear; it stretches back decades and is available for all who are willing to see.

But for others, the charge was unfair. Not only Trump supporters, whose denial is at least understandable but even those who are critical of him.

“Well,” they would aver. “Maybe it’s not fair to call him a racist. I mean, we don’t know what’s in his heart.”

But as Amanda Marcotte explained after watching the always execrable Chuck Todd inquire into the aortic nature of Trump’s prejudice, the question of whether one is a racist “in their heart” is a bizarre one:

Let us imagine for a minute a person who loves, say, the Philadelphia Eagles as much as Trump loves racist language and actions. He tweets about the Eagles regularly, often using all-caps. He buys season tickets and attends every Eagles game he possibly can. He’s been talking about the Eagles and watching their games for decades. He feels elated when they win and crushed when they lose. He wears his Eagles logo hat all the time.

Would anyone look at that man and ask, ‘But wait — is he an Eagles fan in his heart?’

Marcotte’s point was simple, though it is often missed. Racism may be a noun, but it functions as a verb. It’s about what one does, not merely what one is.

If one performs racism regularly, to split hairs about whether racism is central to one’s being or merely a tool cynically deployed to capitalize on the racism of others, is an absurdity. It would be like sizing up a husband and father who regularly deploys verbal intimidation and threats against his wife and children, but then wondering whether he really means those things or is just using them for some other ends. If at that point, you even give a shit about the answer — if the difference seems remotely meaningful to you — you are an enabler of abuse.

So too, with Trump and racism.

Look. When racism has been long embedded in the soil and soul of a nation, it will have affected and infected all of us to a degree. This is why calling people racist is usually either unfair or meaningless. If we’re all a little bit racist (as the song from Avenue Q suggests, humorously but accurately), then to single anyone out as such is like calling them “air-breathers.” It’s like, ok, but now what?

Which is why I’ve long thought we should focus mostly on how people act, and refer to the acts or comments as racist rather than labeling the individuals who do or say certain things in such a manner.

But when a person goes back to the well of bigotry time and again, it places them in territory beyond the norm. It goes well past the ubiquitous nature of racism that we’ve all ingested. It isn’t just an implicit, subconscious bias the likes of which has been so well documented for most of us over the last twenty years of research. In cases like this, we’re speaking of people for whom bias and bigotry and prejudice are defining characteristics of who they are and what they do.

Which brings us to Trump’s latest act of racist ignominy, in which he suggested that a group of congresswomen of color should “go back” to their countries of origin and address the “corruption” and “crime” there before telling America what to do or criticizing his leadership. 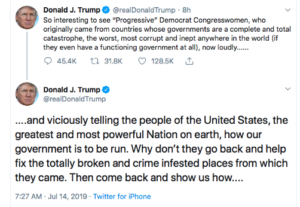 Although he didn’t name the targets of his tweets, the context within which they were offered make it abundantly clear as to whom he was speaking. The persons Trump was invited to “go back where they came from” were newly-elected representatives, Ilhan Omar (MN), Rashida Tlaib (MI), Alexandria Ocasio-Cortez (NY) and Ayanna Pressley (MA), who have emerged as leading voices on the left in their critiques of Democratic party centrism.

That such a comment is absurd should be evident on its face. Three of the four Congresswomen were born in the United States, so they have no country to which they could even theoretically “go back.” And although Ilhan Omar was born in Somalia, she is an American citizen every bit as much as Donald Trump and certainly his wife.

That such a comment is full stop racism is also inarguable, or at least would be in a culture that was forthright about calling such things out.

Honestly, to tell a black woman to go back to Africa — literally what Trump did with regard to Omar — is about as textbook racist as one can get short of spewing the n-word.

And if there were any doubt remaining, the racist nature of Trump’s tweets was revealed even more by his denials of the same, in which he doubled down on his attacks and claimed the congresswomen in question “hate our country.”

Note, when you say that these duly-elected lawmakers of color hate our country, you suggest it is not also their country. The message is clear: America is fundamentally a white nation. People of color do not belong in the way even Donald Trump’s foreign-born (but white) wife does. And if black or brown folks criticize the nation or its leadership, they are ungrateful, unpatriotic and should leave.

Of course, white folks can still criticize. After all, Trump came to power calling the nation a disaster and a place of carnage in need of being made great again, that last word suggesting that it was sucking rather severely. But when whites critique, they do so because they love America. When people of color critique, they do it out of hatred and should catch the first available plane.

It’s one of the oldest racist tropes in the book.

‘Go Back Where You Came From’: The Long Rhetorical Roots Of Trump’s Racist Tweets

Sadly, there are still those who should know better twisting themselves in knots to deny what all our eyes can see, and ears can hear. Most major media outlets seem reluctant to state the obvious, preferring language like “racially-tinged” to describe what would be labeled clearly racist if uttered by an average person.

Even better was a White House correspondent whose piece in the New York Times referred to the comments as “racially-infused.” Such language suggests his tweets were the rhetorical equivalent of the water one often finds in hotel lobbies, loaded with strawberries or cucumbers.

In all honesty, though, racist is not nearly a strong enough word for Donald Trump. He is more than that. He is a white nationalist. Maybe not in the same sense as Richard Spencer who calls openly for a whites-exclusive ethnostate, but a white nationalist nonetheless.

His vision of America is one in which whites sit atop the power structures politically and economically. It is a nation where immigrants of color are discouraged or prevented from entering while white ones are welcomed in, where a nostalgic vision of days gone by becomes the cultural guidepost.

He envisions a nation where people of color “know their place,” and are never to question the prerogatives of white men like himself. It’s a place where black ballplayers and entertainers shut their mouths and dribble, pass, tackle, or sing. It’s a place where white police officers can brutalize people of color with impunity, or drag false confessions out of them, and suffer no consequences.

Donald Trump believes America is white, and all others are welcome only to the extent they give their approval to white rule.

Donald Trump is a Confederate, from Queens by way of Birmingham, circa 1963.

In sixteen months, the rest of us will have a decision to make. Do we send the nation back to that time — do we ratify that retrograde vision — or do we send Donald Trump back to his gilded tower and propel America into a brighter, but far less white, future?

Those who cast that vote will be remembered for what they did, and they will not be forgiven.