I really don’t know where to begin. Who ever could have imagined we’d find ourselves in a situation like this back in January? Or even early February? My childhood best friend (and also still a best friend of mine now) flew from Tampa to see me and my family on February 20th through the 24th; at that time, Covid 19 was not a consideration. Yeah, we heard something on the  news about it, that it had been in China and Korea and even into Italy. But it became a dire situation so quickly.

My 95-year-old father was scheduled to have hip replacement surgery on March 11th after years of incredible pain and bone loss that he had lost most of his mobility and had to be transported around the house in a wheelchair. My 95-year-old mother was still in their house with him, and my three siblings and I had been taking turns staying with them. In October, we had hired a caregiver to come in from 10 pm ’til 7 a.m. so that we could focus on the days. We were looking forward to the surgery decreasing my dad’s pain. At that time in March, most of the warnings we were getting regarding Covid 19 was about not traveling internationally. So we weren’t uptight that he was going into the hospital due to this virus but simply because he was 95, and it would be a rough time for him.

He came through the surgery well, and that first night I stayed with him at the hospital, watching the first round of the ACC basketball tournament on TV with him. During the night, he became disoriented and started hallucinating, but the doctor had warned us that elderly people often did this due to new surroundings and pain meds. Still, it was a hard night. As the daylight came, things got better. We were watching the news when the story broke that the rest of the games of the ACC tournament would be cancelled due to the Covid 19 threat. The ACC Tournament is iconic, legendary in the Southeast, and we couldn’t believe this event would not take place. Literally, overnight the virus situation had gotten exponentially worse. My Dad was supposed to spend three nights and to a rehab facility on that Saturday. However, he wasn’t released Saturday, and then the head nurse came by to tell us that only one person could stay with my dad from then on, and that person had to stay there all the time and could not leave the hospital. My siblings and I had been taking turns, but because of this sudden change, one of my sisters stayed the planned Friday night and then that Saturday night because nobody could switch out with her. He was finally released on Sunday, but he didn’t go to rehab as planned because the rehab facilities had banned family to stay or even to visit. We didn’t want to have him go to rehab and have to get used to new surroundings again and perhaps hallucinate and get disoriented. So we brought him home and once again, my siblings and I took turns staying with him and our mom at their house. A physical therapist would come to their house three times a week. Everything was moving so fast, and things had gotten so scary. My siblings and I decided we wouldn’t have the overnight caregivers to resume their duties because of the fear of exposing our parents to the virus.

Thus, during the past seven weeks, a big part of my time has been spent at my parents’ house. Of course, I spent a lot of time there before my dad’s surgery too, but after his surgery and the onset of the pandemic, I have basically stayed in my home and left, just to drive the 12 minute drive to their house — and back to mine. Maybe an occasional trip to the grocery store where I’d wear a mask and take wipes and hand sanitizer with me.

And meanwhile in my own home, my oldest son —  who moved back to Raleigh from DC in December — has been living with us. I’ve LOVED the time we’ve been able to spend together, particularly because he and I usually have the same tastes in movies and TV and like to watch together. He is a CPA, but he decided he didn’t want to work in public accounting any longer and has been working with my husband in his utility consulting business. Both of them have been working from the house. We are thankful for the work, but it has been stressful. After paying for the lease in DC he couldn’t get out off, he finally rented an apartment in Raleigh and was moving in that week in March when the pandemic got so bad so quickly. It made sense for him to be at home and work with my husband here.

My middle son and his fiance were here with us for a few weeks also, and I loved having them both here, too. A little estrogen to help me out in my house of testosterone. They worked from our home too until they had to leave to go back to where his fiance was living and working in Charlottesville — she’s in the PhD program for two more years.  For about two and a half weeks, I had all three sons and a bonus fiance under my roof, and it was heaven.

My youngest son is a freshman at UNC-Charlotte, which is about two and a half hours away. He came home when the university switched classes to on-line and said it was optional to leave or not. My son left, only taking his necessities, which is what they’d said to do. A few weeks later, they made it mandatory for all to leave, and then a we got an email that his dorm might be used for hospital rooms, and he was asked to come down and get his things — or they’d have a moving company pack it up and store it. My youngest son has mild asthma, and my parents are elderly, so we opted for having the moving company store it. Then they decided they didn’t need the dorm as a hospital after all. So somewhere in Charlotte at a storage place are my son’s belongings that we will have to pick up at a later date. My son is doing well, but he is not a fan of on-line classes and is upset that his freshman year ended so abruptly.

Then the University of Virginia moved the spring graduation until the weekend of October 10th, which is, of course, the weekend that my son and his fiance had planned to get married there. They had picked that weekend because nothing else was going on in Charlottesville because it was fall break. We have been soooo excited about this wedding, especially because my son and his fiance have been dating since the fall of 2009 when they were high school sophomores! Venue paid for, caterer selected, rehearsal dinner spot reserved. They had two blocks of hotel rooms but had decided to wait before booking any more as there were plenty of rooms, and they weren’t sure what would happen with this pandemic. As soon as UVA announced that the spring graduation would be rescheduled for that October weekend, hotel room prices skyrocketed!  So we had to scramble to find some other rooms — Waynesboro, VA is near the vineyard/winery where they are marrying, but in the opposite direction of Charlottesville. That is where they ended up booking more rooms. Not exactly as they had planned, but it worked out.

In between all of this, I’ve managed to do a bit of writing and to even place a few grocery orders on-line (although it’s become more and more difficult to find a delivery or pick-up time). I’ve cleaned out a few closets and even my husband’s sock drawer(s) – yes, plural. My oldest son and I have gone through old photos, and he’s digitalized them. I’ve taken walks on the greenway down the lake to clear my mind and to get the exercise I used to get at the Y. It always seemed easier to jump in the car and walk on the track at the Y than to walk outside on the greenway; during this time, I’ve rediscovered the beautiful greenway that has been outside my door for the past 30 years. I had taken it for granted and sort of forgotten about it in the hectic pace of life.

But the time I’ve found that I really reflect on life and its meaning are the times since the weather has gotten warmer that I can sit outside in the sun with my parents. My dad will walk with his walker out to our driveway, and my mother, who is blessed to be very active at the age of 95, walks out into the yard to check on her flowers or to see if the mail has come. Then we sit down in our lawn chairs and watch the cars go by on the road. Just me and my parents. When I was little and grew up on in that house, there weren’t many cars going up and down the road, even though it led right into downtown. My friend Tina and I would often play a game called “Cars” in which whatever car came down the road was ‘my’ car or ‘her’ car, depending on whose turn it was. Raleigh has grown so much since then that there are no lulls between the whoosh, whoosh of the cars and trucks as they speed by. But back then there would be gaps between the cars, and there was much anticipation as to what kind of car would come around the corner and whose turn it would be. Would it be a Mustang or a beat-up Volkswagon?  Would the good car drive by when it was her turn or my turn?  It was a slow game for an unhurried time.

Lately, as I’ve sat there with my parents, I’ve noticed the lack of traffic due to the stay-at-home restrictions. I’ve appreciated the lulls in the traffic, the sound of the birds around us, even the distant sound of a lawn mower. I thought to myself the other day about that game of Cars. Hadn’t thought about it in years. And as I lifted my head back, my face toward the sun, it felt good for things to be slower again. I want to get back to ‘normal’ as much as anyone. But there is a certain poetry in appreciating what’s around us. A certain poetry in focusing on what we are doing in the moment. This pandemic will end. But something tells me it will leave each of us with a renewed knowledge that life is precious and much more simple than we make it. 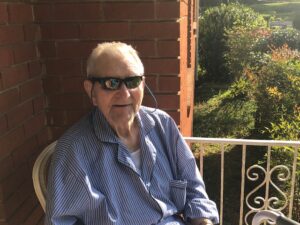