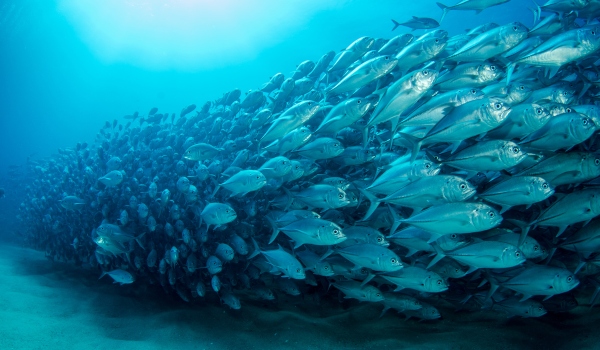 LONDON, 22 March, 2019 – With a little help from ocean heatwaves, the world’s seas are changing. Researchers in California can now name 37 species that have shifted their range further north than ever before in response to unusually hot summers in the eastern Pacific.

In the years 2014-2016, the pelagic red crab Pleuroncodes planipes was spotted off Agate Beach, Oregon, a full 595 kilometres further north than ever before. A deepwater invertebrate called the black-tipped spiny dorid Acanthodoris rhodoceras also made it to Oregon, 620 kilometres from what had previously been its most northerly range.

Both were joined by an assortment of snails, sea butterflies, pteropods, nudibranchs, red algae, sea anemones, siphonophores, fish, dolphins, sea turtles and other citizens of the sub-tropical seas in making the great trek north to what had once been cooler waters, the researchers record in the journal Scientific Reports.

They collected their data in the wake of two significant changes in water temperatures. One involved a mysterious “blob” of warm water that made the journey south from the Gulf of Alaska, the other a blister of warm water on the way north associated with a natural phenomenon known as El Niño in 2015.

Altogether they recorded 67 rare, warm water sightings off California and Oregon: of these 37 had never been observed so far north.

“Against a backdrop of climate change, we hope southern species will track northward because that’s necessary for their persistence and survival,” said Eric Sanford, an ecologist at the University of California, Davis, who led the study.

“It’s perhaps a glimpse of what northern California’s coast might look like in the future as ocean temperatures continue to warm.”

And just in case anyone thinks the temperatures in 2014-2016 were a freak – a response to an unprecedented pattern of weather events – a second set of scientists has uncomfortable news.

Not only were the oceans in 2018 hotter than at any time since records began, but periods of extreme heat on the high seas – that is, marine heatwaves – are on the increase around the globe.

Between 1987 and 2016, the number of heatwave days per year was 54% higher than for the years 1925 to 1954. And this is true not just for the eastern Pacific but for many regions in the Atlantic and Indian Oceans as well.

This is likely to be bad news for individual species, bad news for ecosystems and bad news for the key species – kelps, corals, sea grasses and so on – that provide vital habitats for marine life, they report in the journal Nature Climate Change.

The researchers define marine heatwaves as episodes in which sea surface temperatures exceed the seasonal norm for at least five consecutive days.

Increasing heatwaves over land have already been identified as potentially a threat to human life. They will menace marine life as well, the scientists say.

“Ocean ecosystems currently face a number of threats, including overfishing, acidification and plastic pollution, but periods of extreme temperatures can cause rapid and profound ecological changes, leading to loss of habitat, local extinctions, reduced fisheries catches and altered food webs”, said Dan Smale, of the UK Marine Biological Association, who led the research.

“The major concern is that the oceans have warmed significantly as a consequence of manmade climate change, so that marine heatwaves have become more frequent and will likely intensify over the coming decades.