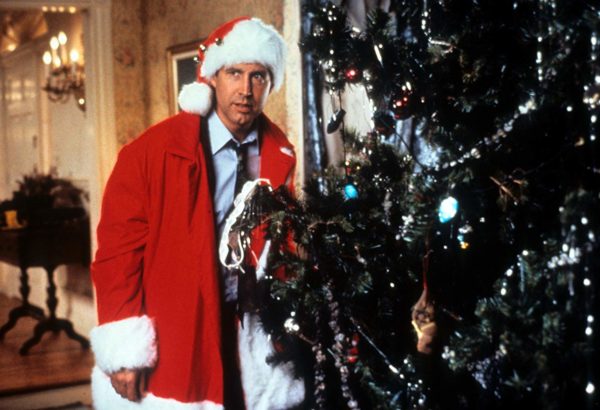 As is tradition — mine and everyone else’s — I recently watched “National Lampoon’s Christmas Vacation” again for the 1,824th time.

Watching a movie or TV show repeatedly like that has its pros and cons. The main con is that you already know what’s going to happen. Same for the main pro, simply because of the anticipation of certain lines and scenes.

For example, Holly and I are already giggling immediately prior to Clark Griswold offering to drive Cousin Eddie out into the middle of nowhere and to leave him for dead. Or the classic shot of Clark joining the two extension cords, teeth clenched and eyes bulging, followed by the Hallelujah Chorus from Handel’s “Messiah” blaring in triumph when the lights spark to life and his suburban home become visible from space.

Need a quick reminder of this scene? Here you go.

As someone who has experienced this EXACT sequence, I share in his joy.

However, my favorite thing about repeated viewings of a great movie is how it strikes you a little differently every time. This year, I found myself actually relating to Clark rather than simply laughing at him, a symptom of 19 years of fatherhood, I suspect. It occurred to me suddenly that Clark represents the essence of Doofus Dad-ness in very authentic ways. In fact, pretty much all of John Hughes’ scripts and movies — while always very funny — were underscored by a certain truth and poignancy.

That said, here are my Top 8 Reasons Why Clark Griswold is the Quintessential Doofus Dad.

8. His enthusiasm. Doofus Dads are notoriously enthusiastic, and we do our best to spread our enthusiasm to our kids, with very little success. We refer to unpleasant things like staying in cheap hotels or being forced to read a book by candlelight when the power goes out as “adventures.” (Kids love that. Especially teenagers.) Clark is able to maintain his enthusiasm through all kinds of disasters but is, of course, unable to infuse his eye-rolling kids with it.

7. His flirtation with the lingerie girl. Not that I condone a married man flirting with anyone, but sure, I get it. Clark is still at that age (late 30s, early 40s, I’m guessing) where most dads and husbands still have a healthy appreciation of a good-looking woman and strive for a little naughtiness in their sex lives. (Not me. I’m talking about other Doofus Dads here.) For better or worse, it’s just the way we’re wired. This tendency is counteracted by the fact that most of us are far too awkward and unskilled to do anything about it, and if we did, we would be so racked with guilt that we could never carry it through. This is Clark in a nutshell. While clearly rattled by the girl’s smoldering good looks and sex appeal, he would never act on his carnal emotions. He simply loves his wife and kids too much. (We first learned this from the Christy Brinkley episode of the original “Vacation” movie.)

6. His swimming pool fantasy. Carrying the illicit sex topic a little further, Clark’s swimming pool fantasy is perfectly that of a Doofus Dad. It begins wholesomely enough — his family enjoying a day at the pool that Clark was able to provide with his hard-earned money, Cousin Eddie bouncing on the diving board notwithstanding. But Clark’s interaction with the lingerie girl was just too recent, and she manages to slip in there wearing a skimpy bikini, derailing an otherwise clean fantasy and sending it into a dangerous direction. In classic Doofus Dad fashion, though, his sexy dream — never to be fulfilled — is interrupted by family obligations.

5. His worry over the bonus check. This is another perfect touch created by screenwriter Hughes. How many of us have ever made a well-meaning but stupid financial decision on behalf of our families? By fronting the swimming pool money before receiving his bonus, Clark’s decision ends up haunting him throughout the holidays, and ultimately, turning him into a serious and unstable Scrooge. Doofus Dads almost always have the best of intentions, but sometimes screw up the details. We also get famously grumpy when our plans go south, a condition our families deal with by simply steering clear of us for a while.

4. His tendency to view himself as cool. Clark represents all of us guys who see ourselves as how we once were. We can’t help it. We still think of ourselves as college-aged players with full heads of hair who know all the hip slang, current bands, and cutting-edge fashions. Except we’re not and we don’t. And even if we were, it would be a little weird and creepy. Even though Clark uses phrases like “Later, dudes,” he still dresses like a dad who was raised in the 1950s and prefers to sing “Joy to the World” and “Mockingbird” (first Vacation movie) over any current songs. He chooses flannel shirts and Christmas sweaters over the slick fashion of his narcissistic neighbors.

3. His pride in his work. Some dads have cool jobs, like a race-car driver or an astronaut or a rock musician. Most of us don’t. But like Clark — a food additive inventor — we nonetheless are proud of what we do. In fact, Doofus Dads have a way of making whatever they do sound more fascinating than it (probably) actually is. Notice how excited Clark is about his “non-nutritive cereal varnish.” He practically lights up while describing it to his coworker.

2. His need to make everything perfect. Keep in mind, I didn’t say his need for everything to be perfect. I said he has to make everything perfect. This is Doofus Dad 101. We always feel the pressure of our position in the family, and we must live up to that expectation and the examples set by our own fathers, no matter what. This is why Clark drives his family out into the middle of nowhere to cut down (dig up) the Griswold Family Christmas Tree instead of buying one at a tree lot, like any normal person. And this is why he works so hard to cover his house in a zillion lights — perfectly stapled into a mathematical grid pattern — and why he’s so upset when they don’t light. (All of us Doofus Dads have been there.) Actually, most everything Clark does in the movie is an attempt at providing the perfect Christmas experience for his family. But as in real life, things are rarely perfect.

1. His love of his family. This is what makes Clark the quintessential Doofus Dad. We all love our families and they love us, regardless of the fact that all humans are essentially train wrecks, no matter how perfect we appear on social media. When Audrey tries to console Clark during the Christmas light debacle by saying “They look nice even if they’re not lit,” I get a lump in my throat. That little moment perfectly encapsulates the experience of being a Doofus Dad. We try our best, we occasionally screw up, and our family loves us anyway.

Merry Christmas from this Doofus Dad to you and your family!