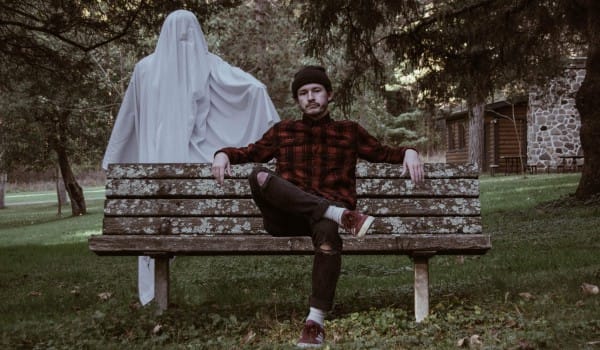 I can’t go a day without being bothered by him. His face leers at me when I’m in the bathroom or washing dishes, disrupting my ho-hum calm. I’m walking out of my house and his car passes by — 20 times.

I can’t be alone for too long without his memory flooding in. Memories that somehow seem skewed. He’s always the good guy. He’s so attentive and so understanding. He’s always doing the right thing, making me feel like my perception was twisted up the whole time we were together. Did I get it all wrong? Was he really the perfect mate?

~Jennifer Pastiloff, On Being Human

The visions and memories and imaginary flirtations that stalked my psyche were him and not him. After another coffee sip, pondering Jen’s words, the truth hit me hard. A layer of ignorance peeled itself off my mind and heart, allowing me to see with more clarity and feel with more compassion.

The ex that stalks me was the ghost that I created when we were dating. He was there and not there. All the time. He was the perfect mate that filled in the imperfect moments. When there was tension between us or when he said something that torqued my soul up in knots, I suddenly started to fantasize about what I would want him to say. The wanting and wishing suddenly became my reality. I started imagining what life would be like if he was living up to his full potential. I thought I was being positive. I thought somehow my gift for seeing the best in others would trickle from my subconscious to his and would morph him into who I wanted him to be.

In our relationship, my gift at focusing on the best in others became my curse. I saw him as I wanted him to be. The curse was ignoring who he really was in the here and now. I wrote off the red flags as flawed human moments. He will do better next time, I kept saying to myself. Only there was no next time. There were just more flawed moments on repeat.

The red flags became the fuel for my fantasy lover. Each time he messed up, his ghost got a little more perfect. By the time our relationship ended, I was confused about our love. In my first few days without him, I felt relief. And then the stalking began. The ghost of the just-right lover wouldn’t leave me alone.

His fantasy self felt comfortable to me at first. A rush of longing and passion swelled through me in an orgasmic way when his face popped into my mind or when I saw a car just like his. The memories, images, and reminders were a soothing balm to my fresh break-up wounds — until they weren’t.

Within a week I felt haunted. I felt empty. I didn’t know if I even loved the real him. A wave of guilt washed over me as his crystal blue eyes popped into my mind.

Who are you? I asked, with some hesitation.

I didn’t wait for the answer. I was too scared of the truth.

His flawed, real self would keep showing up. His ghost would keep me hoping he had changed. When my real ex texted me out of the blue a few months after I had pushed his fantasy ghost into the backdrop of my mind, I felt angry. I was in a new relationship. I thought I had moved on. For the first time, I saw him as he really was. My bike got stolen from the backyard, was all the text said. The words, why is he texting me? pounced through my mind like a wildcat chasing prey. I didn’t respond at first — my wild cat self hid in the grass, waiting for the just-right moment to reply — even though I knew it was a ploy for attention. His pull was strong. He didn’t even ask how I was doing. And I somehow seemed to let that pass by. It was a fantasy lover moment. His ghost asked me, How are you? I want to know all.