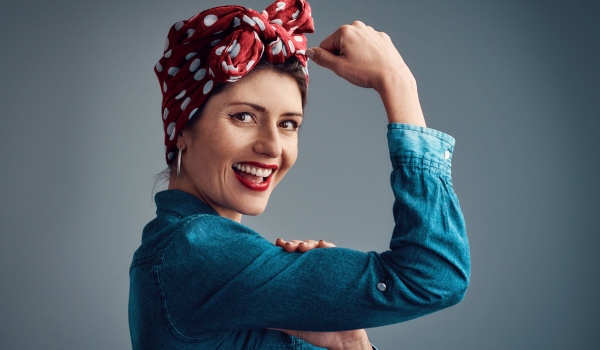 “Just keep putting one foot in front of the other.”

That was Mina Guli’s mantra as she ran 40 marathons, across seven continents, through seven deserts. All within seven weeks.

It was a superhuman feat. But challenging her mental and physical stamina was not the purpose of the run. Guli had a far greater driver.

“I did it for one reason: to highlight the water scarcity problem,” Guli says.

“It was an opportunity to visit some of the most extreme places on our planet and to understand how our Earth has adapted to conditions of absolute water scarcity.”

Guli had hundreds of thousands of people following her epic 40-marathon adventure through some of the harshest places on earth. It was something no-one in the world had done before.
Not a bad effort for someone who says she was “never a runner” and was told after fracturing her vertebra at the age of 22 that she would never run again.

“Most people would’ve taken that as a great excuse to go and sit on the couch,” Guli says.

“But I just looked at the doctor and said, ‘Wait a second. No-one sets limits for me, except me!’”
Running to raise awareness
Now 45, Guli is the founder and CEO of the charity Thirst. Its mission is to create awareness about the world’s current water crisis. With a background in environmental law and science and a growing personal awareness of water scarcity, Guli was driven to dedicate her life to the cause.

The 7 Deserts Run took place in some of the world’s most extreme – and beautiful – environments.

“For example, the Richtersveld Desert in South Africa is one of the most bio-diverse deserts on the planet,” says Guli. “I was particularly interested in Antarctica because of its strong link with climate change and how that affects rainfall.

“The Atacama Desert in Chile is used for mining. I wanted to see and better understand the huge water consumption associated with mining as water is used to extract minerals to dampen dust and generate power to operate the mine.”

Guli also ran through the pink dunes of the Arabian Desert in Jordan, the brilliant red sand of Australia’s Simpson Desert, the US’s Mojave Desert and Europe’s only mainland desert, the Tabernas in Spain.
Her goal was to “make saving water famous”. She managed to achieve that goal, with hundreds of thousands of people following her journey. Guli’s efforts encouraged many of those people to make water-saving pledges of their own, like saving 2,700 litres of water by buying one fewer t-shirt or buying a cotton bag instead of leather – saving 15,640 litres (based on an average sized bag). At the end of the run, her followers had pledged to save more than 131,000,000 litres.

“Water is life”
What kept her going for more than 1,600 kilometres, when the temperatures ranged from minus 20 degrees Celsius in Antarctica to 47 degrees in Australia and her body was aching all over?

“On days when I wondered why I was doing it, I would meet people who would reinvigorate my commitment,” Guli says.

“For example, the Bedouins in Jordan helped us find water on the days when we had no access and all the wells were dry.

“The Aboriginal people in the Simpson Desert told me how they’ve survived for so many thousands of years without water. One woman said to me, ‘water is life, without it we are nothing’.”

In 2015, the World Economic Forum (WEF) ranked the water crisis as the top concern for the next decade.

Its Global Risks report found that global food production needs to increase by 50 per cent by 2050.
Because 70 per cent of global water consumption is used in agriculture, the WEF is warning water scarcity is dire and spiralling rapidly.

By 2030, there will be a 40 per cent difference between the demand and supply of water.
“We’ve got a massive problem already,” Guli says.“Currently, 70 per cent of clean water is being used by agriculture, 20 per cent by manufacturing, and 10 per cent in household use. The solution is addressing the major contributor towards scarcity: the use of water to make consumer products.”

Guli wants consumers to consider facts like these:
• The outfit you wear on any average day takes more water to make than all the water you will drink in your lifetime
• One pair of jeans takes 11,000 litres of water to make
• Ninety-five per cent of your daily water footprint is outside your home.

“The real way we’re going to change water scarcity is by working with companies to change the way they use water throughout the supply chain,” says Guli.

Solutions in education
Guli launched the charity Thirst on World Water Day in 2012.

She based her team in Beijing, where they educate hundreds of thousands of young Chinese students about the water crisis and possible solutions.

“When you consider that most people in the world own things that are made in China, you realise that we’re all connected to China’s water scarcity issues.”

In its first year, the Water Experience program educated 10,000 Chinese students about water scarcity, the value of water and how everyday purchasing decisions can help reduce water consumption.

The Silk Road Challenge is growing too.

In 2015, 500 high school students took part in the program, which challenges them to create innovative solutions for the water crisis.

The following year, Thirst had to create a waiting list after 170,000 students signed up to take part.

“If we can create global consumers who truly understand the value of water and how it is used in products, then we can create incentives for companies to change the way they use water, all the way through the supply chain. That’s my goal,” says Guli.
Every drop counts
The impressive Australian was this year listed at number 45 on Fortune magazine’s world’s 50 greatest leaders, alongside the Pope and German Chancellor Angela Merkel.

“For me it’s a sense of recognition of the things I’ve done… little old me from Melbourne,” says Guli.

“People like me show that Australians are pretty tough nuts, and when we want to make change in the world, we can do it.”

Guli is currently making a film about the 7 Deserts Run and writing a book.

When asked whether she ever feels overwhelmed by the scale of the global water crisis, Guli is characteristically resolute.

“If we decided that every problem was too big to do something about, we’d never make change.

“I feel like each step I take is one step closer to solving the problem.”

Just keep putting one foot in front of the other.

Previously published on australiaunlimited.com and is republished here under a Creative Commons license.
—