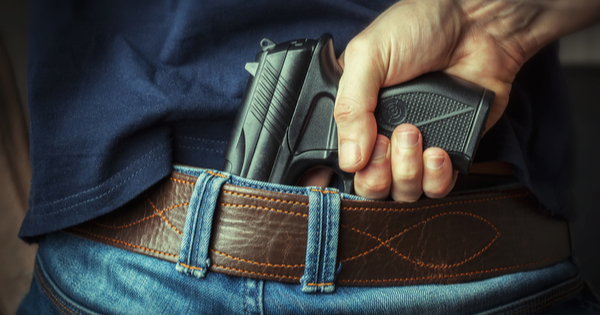 Recently the Ohio legislature revamped and reintroduced a “stand your ground” bill. Claiming that thirty-six other states have similar laws, it was, they felt, time for the Buckeye State to join the 1800s.  The Governor is on board, and it is coming.

It doesn’t take much imagination to see concealed carry permit holders all over the state smile with a devilish glee, pat their holstered sidearm and think “next guy that cuts in front of me at the You-Scan in Krogers, I’m going to bust a cap in his ass,” or “fill him full of lead,” or “vengeance is mine, sayeth the Lord, and the NRA.”

Or whatever the proper term is while a person is contemplating the numerous excuses to shoot someone.

Let’s face it most of us never have any real reason to shoot someone else. I am sixty years old and I’ve been robbed at gunpoint, and shot at. Technically, they probably weren’t really shooting at me, but they were shooting, and the bullets flew into the wall behind me, and at the time I just assumed they were shooting at me. Despite these armed encounters I never wanted to shoot anyone. Honestly, the thought makes me nauseous.

Yes, I suppose, over the years, on an odd occasion, Stand Your Ground may have actually saved a life, but if you read through the cases, probably hundreds of cases, most times it was a simple matter, escalated, supercharged and eventually exploded because of the belief that there would be no punishment.

Both sides can find evidence, both sides have proof, and still, people are dying. Being shot over parking places, automobile accidents, being on the wrong porch at the wrong time. Split-second decisions that can never be amended, without negotiation, without any effort to find a solution.

Now you see me, now you don’t. Somehow I don’t think this is what the 2nd Amendment was meant to provide.