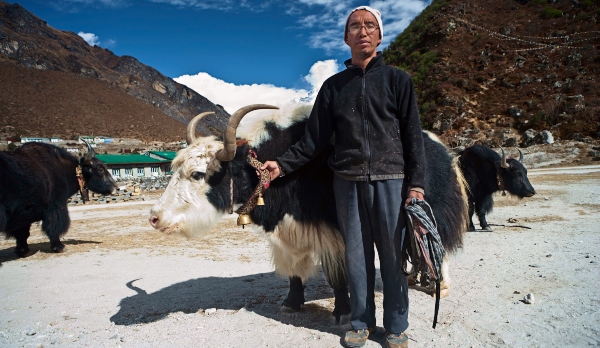 This story is the first of a series on the experiences of Himalayan Sherpas adapting to a warmer world. Read the accounts of a guesthouse owner, glaciologist and anthropologist.

Twenty-six-year-old Tenzing Chogyal Sherpa spends most of the year working as a glaciologist in Kathmandu, Nepal’s capital city. But once a year, he takes the white-knuckle flight up to Lukla and its terrifyingly short runway. Then he sets out on foot for a day to Phakding village and then to Namche Bazaar on a trail that follows the Dudh Koshi River through narrow valleys.

By the time he reaches Namche Bazaar, a busy market town and staging point for expeditions to Mount Everest, the air is decidedly thinner, and he has gained more than 1,500 meters in altitude. The long journey is always worth it.

“All my family live in Namche and I feel so much at home there,” he says. The world’s tallest peak towers over Tenzing’s hometown, yet he seeks a different view. “At night you look up and there’s the Milky Way,” he says. “It’s beautiful.”

Tenzing is a member of the Sherpa people, a Nepalese ethnic group that traces its roots to Tibet. Although small populations of Sherpas live in North America, Australia, Europe, India and Tibet, most live in northeastern Nepal and earn their living providing lodging, mountaineering and other services to tourists that have come from all corners of the Earth to climb Everest and other Himalayan peaks.

But over the course of the last decade, it’s not just trekkers these mountains have attracted. Increasingly, scientists have been flocking here to study how the changing climate is impacting high-altitude glaciers, snow cover and other natural processes of this ecologically and culturally sacred region.

So far, findings have been murky. In late 2009, the Intergovernmental Panel on Climate Change (IPCC) announced that Himalayan glaciers would melt by 2035, only to backpedal and revise this statement five years later. And while researchers have observed a warming trend in the Himalayas and the Hindu Kush range west of Central Asia, they have also observed contrasting glacier responses to climate change. Glaciers in eastern Karakoram and West Kunlun in the northwestern edge of the Tibetan Plateau have been slightly gaining mass, while those in the nearby Himalayas and Jammu Kashmir in northern India are losing mass.

To complicate things further, researchers see a higher probability of snowfall in the Karakoram and western Himalayas that will likely increase glacier mass in those areas, a finding that contradicts many expectations in the scientific community.

This is all to say that Nepal’s high mountain ranges are enormously complex natural systems that science is still figuring out how to understand.

In the meantime, Sherpas and their homelands are in a vulnerable position. Higher temperatures in the Himalayas could trigger changes such as increased glacial melting, less predictable water availability, or worse, glacial lake outburst floods, all of which impact Sherpas’ livelihoods and well-being.

Documenting the stories untold by science, accounts from three Sherpas describe what life is like in these near-heaven landscapes as they’re being thrown to the ways of change. Read them below.

A version of this post was previously published on news.globallandscapesforum.org and is republished here with a Creative Commons License .