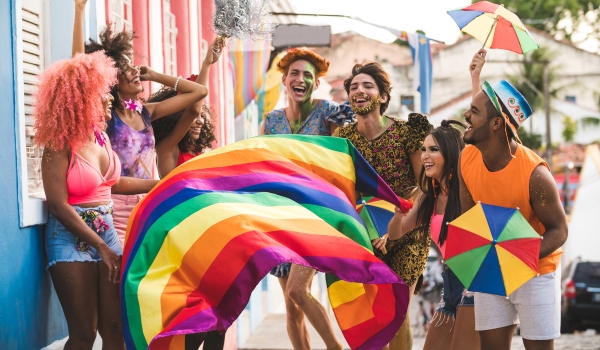 The onslaught against LGBT people in Indonesia is rising again these days, repeating the heated debate that took place in 2016. This was triggered in December last year by the Constitutional Court’s rejection of a petition that calls to outlaw premarital sex and same-sex behaviour. The effort to outlaw these sexual conducts has now moved into the parliament, who are deliberating the revised Criminal Code.

Media coverage, has again, highlighted LGBT as a threat, moral degradation, sinful and punishable. In the midst of the anti-homosexuality “campaign”, on January 25th, 2018 a national survey was released on society’s attitudes toward LGBT. Conducted by Saiful Mujani Research & Consulting (SMRC), the survey is perhaps the first of its kind. Using multistage random sampling, 1,220 respondents were interviewed.

Some of the main findings include:

• 58.3% of the respondents know of or have heard about LGBT

From those that know what LGBT is:

• 79% feel uncomfortable having LGBT as their neighbour

• About 46% can accept if a family member is LGBT

• 50% perceive that the state should protect the LGBT.

In general, the survey shows a degree of social inclusion among Indonesian society towards LGBT. Social inclusion is a process of efforts to improve participation of disadvantaged individuals and groups in the society. It includes enhancing opportunities, providing access to resources, social acceptance and respecting rights.

It seems that LGBT is still socially excluded at the community level, but more socially included in the family. The survey results also show that perceptions towards LGBT people in society are not always negative.

Unfortunately, it is unclear of what is meant by the “LGBT threat” in this survey. What kind of threat that people feel about LGBT? Considering the ongoing debates on LGBT, I suspect this so-called “LGBT threat” is perceived as a moral threat and LGBT-as-a-disease.

In addition, the term LGBT has several meanings to general population. Firstly, LGBT often refers to homosexuality. Secondly, it is associated with physical appearance such as effeminate men, tomboys or cross-dressing, particularly waria – transgender women. Thirdly, LGBT is sometimes believed to be “contagious”, like a disease. The visibility of waria, to a certain extent, creates less stigma. However, they also often have a low social status (sex worker, street singer, hair-dresser) and therefore waria regularly experience humiliation.

A 2012 survey on stigma and social inclusion to gay and waria, which I conducted with two colleagues from La Trobe University and is yet to be published, had rather different results. Conducted in Jakarta, Makassar and Surabaya, we interviewed 611 people in public spaces such as terminals, parks and malls. Around 40% of the respondents, who knew any gay/waria, felt uncomfortable if a family member is gay/waria. Yet, about 22% of those who knew any gay/waria and 55% of those who did not felt uncomfortable living next door to gay/waria.

These results are significantly different from the SMRC survey. However, the latter survey captures the general societal attitudes which appear to be changing towards LGBT. It reveals that social exclusion of LGBT is increasing, particularly at the community level – as shown by the low degree of acceptance to having an LGBT neighbour.

It is important to highlight our 2012 survey and interviews with key informants, supported a “basic contact hypothesis”. This is where knowing a gay man or a waria is related to a more positive and human response to them. Of those who know any people who are gay or waria, about 60% can accept if a family member is gay or waria. However, this finding is quite different with the results of the recent SMRC survey.

Some of our data suggests that rather than empathising with the disadvantage experienced by gay men and waria, the more common response was one of unreflective pity. Key informants used pity as a demonstration of their concern, but this inevitably leads to greater marginalisation rather than greater participation and inclusion. It also reinforces the notion that gay and waria – and LGBT in general – cannot truly be understood from the outside.

The SMRC survey on LGBT is an important effort to understand the perceptions of Indonesian society. Regular and more rigorous surveying is crucial to capture the dynamics of people’s attitudes toward LGBT. While there is a lot in this data which is worrying, it also indicates a lot of goodwill and optimism. Furthermore, from our study, most of those interviewed genuinely wanted the best for these communities, but few had access to realistic and productive models for achieving greater social inclusion.