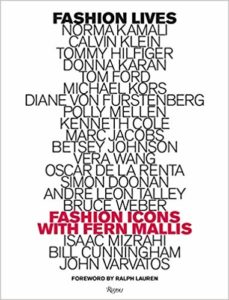 “Fashion Lives” is big as a MacBook and heavy as a small barbell, but if you like to read about fashion, you’ll find it as light as an airport page-turner. Dish? Honey, the dish does not quit. Emotion, intelligence, compassion, ideas? Yes, in quantity, and not so much because the 19 designers, photographers and editors interviewed here are so verbal but because the interviewer is so haimish and well prepared that her guests nearly forget they’re onstage at the 92nd Street YHMA.

All praise, therefore, to Fern Mallis, who invented this series and got almost everyone she asked to participate. But schmoozing the talent is the least of it. Doing your homework and getting guests who are usually guarded by a wall of publicists to say more than they may have intended — that’s the trick.

“There are no impertinent questions, only impertinent answers,” Oscar Wilde said. Few interviewers today agree; they trade relevance for access. Fern Mallis uses her access to get great anecdotes, and then she slips in a few pointed questions. She gets answers because everyone knows her story — she’s been fashion’s champion for decades. In brief: Mallis was the Executive Director of the Council of Fashion Designers of America from 1991 to 2001. She created Fashion Week, which generated a fortune for the city, before moving on to IMG Fashion and her own fashion and design consultancy. Why no reality TV show? Producers found her “too nice.” But in this format, a friend talking to a friend yields gems. [To buy “Fashion Lives” from Amazon, click here.]

Among the many anecdotes I marked: Norma Kamali, in the early ‘60s, worked for an airline and got to fly to London for $29 round trip, and what she saw in London gave her the courage to lease a shop on East 53rd Street — for $285 a month. Mallis asks Calvin: “What do Customs agents say when you get back from a trip and they look at the passport and it says Calvin Klein?” And Klein replies, with some amusement, “Well, I generally don’t go through Customs — they get on the plane.” Tom Ford, as a kid in Texas, carried a briefcase and wore suits. Michael Kors, on his marriage to Lance LePere: “We’re probably the only people who got married on the beach, jumped in the jeep, went to Easthampton, had pizza at Sam’s and saw ‘The Help.’” Polly Mellen flees a chance for sex with William Holden. Oscar de la Renta gives John Galliano a second chance. Bruce Weber’s dogs get acupuncture. Bill Cunningham explains why the best time to photograph on the street is 8:30 in the morning.

For Fern Mallis, charm begins and ends with a small public ego — so small it would be easy to focus on the bold-face names and ignore the woman who gave them a platform on which to dance. Better, I thought, to shine a spotlight on their enabler. Ms. Mallis, I have ten questions for you.

JK: I remember being backstage with Isaac Mizrahi after his blowout show in 1989. His mother was there, beaming. Marc Jacobs joined them. “My mother never comes to my shows,” he said. And I thought that there, right there, was a major difference in everything these two men did. And you, I see, start every interview with questions about childhood. Why are the early years so important for you?

FM: I think we are who we are because of our parents and families, and our early upbringing and environments play a key role. For creative people and designers I’m curious what they were surrounded by, and what visual imagery they remember, what helped form their taste levels.

JK: You ask every guest about his/her astrological sign. Let’s deal with yours. You were born on March 26, 1948, on the cusp of Pisces and Aries. Significance?

FM: Aries, with Gemini rising. I’m headstrong, a leader, and I start lots of things but don’t always finish them.

JK: For the designers you interview, Studio 54 comes up again and again. What was its influence on fashion?

FM: Studio 54 was the first time any of us had seen gala black tie dressing mix with poufs and roller-skates, jeans and every form of costume available — as well as the barely dressed. Thankfully it happened before social media and everyone in the world partied with a camera in hand.

JK: I’ve marked revelation after revelation, like Yves Saint Laurent’s drop-dead letter to Tom Ford (“In 13 months, you have destroyed what it took me 40 years to create”). What was the biggest surprise for you?

JK: In the late ‘80s, I wrote the CFDA awards shows. They were held in the Rogers Auditorium at the Metropolitan Museum, which seats just 700. The night felt like a family reunion. I know nostalgia is pointless — but are you nostalgic for that pre-corporate era?

FM: A little. It was nice when sponsors’ names weren’t plastered all over everything, but just supported events and causes because it was the right thing to do.

JK: Along the same lines, I kept thinking as I read: If these designers didn’t have licenses and perfumes and do second labels for discount stores, they’d all be out of business. Is the pure “fashion designer” a thing of the past?

FM: Close to it. And since so many of them have become public companies, they have to keep making bigger and bigger profits to satisfy shareholders. The high-end collections of most designers are the least profitable. Fragrances and licenses are where they do the biggest business, at price points that make it affordable and accessible.

JK: Isaac Mizrahi mourns the death of Loehmann’s (“That is like global warming.”) But there’s a new Loehmann’s — Gilt. I’m fascinated that none of your guests seems to have much interest in the Internet. (The exception is Bill Cunningham: “Look at the lines waiting to get into the Apple store on Fifth Avenue and 59th Street. Do you see a line waiting to get into Bergdorf or Saks?”) Is this generational?

FM: Yes. Most of these designers text; social media and Internet presence are for their staff. Bill Cunningham rightly identified the importance of this age of technology — but he doesn’t have a computer or a cell phone and is impossible to reach.

JK: The most emotional interview for you?

FM: Probably Bill Cunningham, as he’s the most private. He was quite moved while discussing his family and early upbringing. His was an epic interview, and I could feel his pain at moments. I touched his hand to let him pause several times. And Norma Kamali — we’ve known each other and have been friends for so long. We shared friends who have passed away from AIDS, and that meant a great deal to me.

JK: The most emotional interview for the designer/guest?

FM: There were many. Vera Wang talked about having to do her fashion show at the tents the morning after she raced to be with her father who passed away the night before; she cried the entire walk around the runway when she took her bow. Calvin and Marc were very honest about their addictions. When Diane von Furstenberg shared the story of her mother’s experience in the concentration camps, you could hear a pin drop.

JK: As we used to say in sexy Internet chat rooms: What are you wearing?