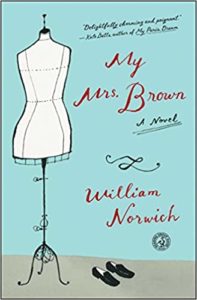 I watched a man read words from a teleprompter that he did not feel to reassure people he does not love, and when he was finished, I thought it would be nice to meet a 100% decent person — yes, a character in a novel, but so well drawn she feels real. There are no wild thrills in this book: no masters of evil, no cheating spouses, no sociopaths. no killers. In this time of involuntary isolation, “My Mrs. Brown” is a book for a few quiet hours. For comfort. And more than that: for self-care.

When I met Billy Norwich, all those years ago, I thought: He’s much too nice to be doing that job. I thought that about his next job, and the next, and I waited for him to hit the wall. He never did. The New York Observer. Vogue. The Times. A great career.

Along the way, he wrote a novel described as “sweet,” which pretty much guaranteed I wouldn’t read it. Now he’s published another, “My Mrs. Brown,” which is short, thus very congenial to me. “My Mrs. Brown” is also sweet: Emilia Brown, 66, is a brown wren, just the kind of woman you expect to find in a neat, small house in a town as drab as Ashville, Rhode Island. But there is something about Mrs. Brown and about Billy Norwich’s writing that is quietly extraordinary, and although there were any number of pages when everything seemed just a little too neat, I never found myself putting the book down. I did find myself crying a lot. And often.

“My Mrs. Brown” is as old-fashioned as its main character and its author’s style. It’s a story that a small town, with two feet in the past, produces: Mrs. Brown — “a noble spirit…[with] the honorable loneliness of the American grown-up” — had a job in a hairdressing salon, but her real vocation was to be “a good person and live an ordered, simple life.”

Because, symbolically, “it could set something right.”

“My Mrs. Brown” is the story of two mysteries. One is about the suit and the unattainable money and how Mrs. Brown comes to attain it. The other is the “secret grief” that inspires the quest for that suit. Both are ridiculously improbable, corny and miraculous, and if I told you what happens, you wouldn’t be wrong to arch an eyebrow and level snark at the book. But if you read the book, you won’t think any of that — you’ll want Mrs. Brown to get exactly what she wants, which is everything you can be sure she wouldn’t get in our nasty world. [To buy the paperback from Amazon, click here. For the Kindle edition, click here.]

The novel is, in essence, a fairy tale. It starts like this:

Early one September not long ago, a rural woman with a secret grief traveled to New York City in pursuit of a dream, to buy the most beautiful and correct dress she’d ever seen.

The occasion wasn’t a joy trip. Without tremendous effort before her trip, and a lot of luck, the dress was hardly anything she could have ever afforded. As for going to New York City, where she’d never been before? It was a terrifying prospect, dangerous and disorienting, but she did it.

The dress wasn’t at all what you might expect. It wasn’t a riot of feathers and chiffon. It wasn’t designed to catch a man or reawaken her youth. It had nothing to do with a paparazzi-lined red carpet or the glories of shopping, “It” bags, “It” designers, or must-haves. The dress — and the lady’s use for it — was something else.

This daring voyager was Emilia Brown, or Mrs. Brown as she was generally known in her hometown, Ashville, Rhode Island. She was sixty-six years old, a widow; if she was a scent, she was tea with honey, but if she was a color, she was a study in gray. Whether from the friction of living without life’s buffering luxuries and engaging ambitions, or by the reduction of dreams and expectations that comes with age: gray. Mrs. Brown was drained of color. Except for her green-brown eyes. If and when she smiled, well, it was like watching a rose open in one of those time-lapse films, and her eyes, spring flowers at twilight, lit up her face.

To say that she was overall gray isn’t to say she was a sad sight or threadbare. It’s just that in a world where status is measured in how much space one takes up and how much noise one makes—and noise takes up its own kind of space, as any pollution does — a quiet person like Mrs. Brown falls invisible.

In “My Mrs. Brown,” one of our most sensitive fashion journalists has written a book about a good woman whose considerable goodness goes mostly overlooked — considering a literary market that hungers for women who kill and men who cheat, what Billy Norwich has done is different and courageous. And he’s done it so quietly and stylishly that his novel is impossible to overlook.

Fiction is often memoir in disguise, and maybe it is here. As I turned the last page, with the secret revealed, I thought: Good for you, Mrs. Brown. And also: Good for you, Billy.