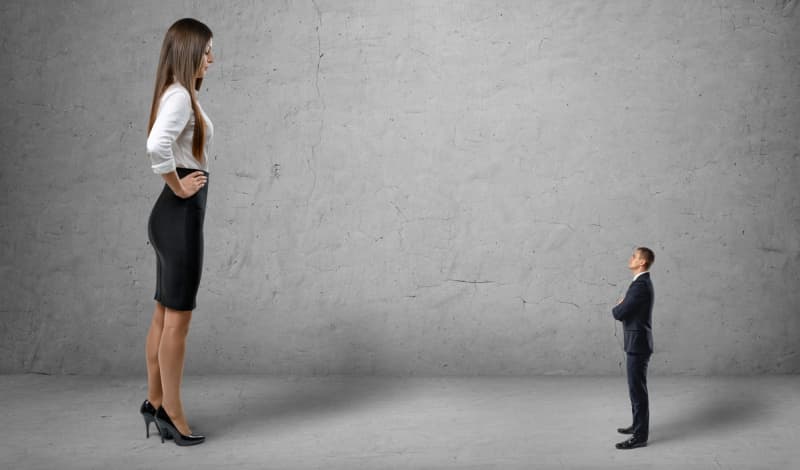 The day i understood that i would never have accepted to make myself smaller to make a man feel bigger, I

I was at school and, during the lunch break, I was eating a sandwich with my boyfriend.

We were sitting together in the sun, immersed in the noisy confusion of other kids and he suddenly looked me confidently, without a shadow of doubt crossing his gaze, and he said to me:

“When I’ll grow up, I’ll marry you, we’ll live together and I’ll work to make you live well, in a beautiful house where you can be our childrens’ mom”.

I looked at him furiously and answered him:

“When I’ll grow up I’ll be a writer, I’ll travel to present my books and my children will be proud of me”.

“But women stay at home! My mother does it!”

“And who cares about home and family?”

“Pay an housekeeper” and I pushed him hard enough to drop him on the ground.

When my mother came to pick me up at the principal’s office, she asked me what made me so angry.

“I have my dreams and I don’t give up just because he believes that his dreams are more important.”

“Well done, that’s my girl! You have clear ideas and that’s fair. But, next time, use words, not fists. Words are the most powerful weapon that you have to express yourself; only the weak resort to violence”.

I knew my mother was right, but I couldn’t shake that sense of rage and injustice facing that attempt to bully me, It was like I was born just to help someone else to be realized. And I knew my mother understood me, my family is teeming with women that are strong, able to dream and work for their dreams, able to listening but also making their voices heard, capable of subtle cunning to bend reality and often their men to their will.

That wasn’t the last time I was in the presence of a man who assumed I should be live up to his expectations or his needs, however well-meaning.

I’m not talking just about career, I’m talking about something deeper, which concerns the idea rooted in many man that we must always be the ones to take an extra step towards them, to be more forgiving towards their mistakes or weaknesses, to push and exhort them as if they were lame horses but also thoroughbred to lead to victory, whether it is a career advancement or to make them accept the idea of growing up, becoming a father, engaging in a serious relationship or just put the damn socks in the laundry basket. I’m talking about a kind of laziness of many men in committing to change and adapt themselves, mixed with the presumption that it’s right, that we have to make the greatest effort.

And then, when we do, when we finally turn into wonder women able to manage our job, our home, our children education and our coach role of our relationship and partners, we suddenly become too much: too intrusive, too demanding, too independent, too domineering.

So we are required ,with words or silence or resentment or betrayal, to make us smaller, less bulky.

I’m talking about the balance of feeling and energies needed to make a couple work, not about equal rights but our right to be ourselves without having to pretend to be less to keep men from feeling undervalued.

How many times we have heard this word:

“Make your man feel appreciated, what does it cost you?”

“Man must be guided, be patient”.

“Man are hunters but they always come back home”

And the one I hate most…

“Behind a big man there is always a big woman”.

Imperfect words, that make men seems limited and lacking in intellect, so dependent on their narcissism and insecure that they can be bought by our perennial worship.

And make us look like a martyrs and nurses voted on a single mission: be of help to men.

I know who I am and what I want and I just worked it out.

I had a wonderful family that educated me to respect, equality, dialogue, love, tolerance , that gave me all possible tools, but also taught me to use them by myself because everyone has their own path to follow and everyone has their own step. To be who I am and know what I know about me and my life and about what I think life is to me, coasts me tears and blood, I had to fall and hurt myself so many times it’s weird I survived, It took me years to get to know myself and I had to question myself so much that maybe I’ve consumed most of my brain. Sometimes I forgot the anger I felt when I was 13 because of that guy who took me for granted. Sometimes I forgot my dreams, I’ve put up to much and received less than I’ve given but I always found myself, even we this involved losing someone.

Mi first loves were a disaster: I loved too much or too little, I took a beating from the baddest guy of the company and the next time I chose the best and I massacred him just to feel strong again, I was unsure who I was and how to handle my femininity, the desire, my hormones.

Oh man! First time I was ever kissed I was 14! I was one, giant question mark!

In time I came true, becoming ME and I’m happy with what I am because I’ve earned it. I’ve learned to investigate my aspirations following them, to know me and figure out what I want. For example I realized that I’m not capable to forgive wrongs too great, that undermine my dignity and my serenity and I realized that I have an extra memory for bad words spoken to me just to hurt me so I learned to pretend respect and not to expect myself to forgive at any costs, especially because I should be the one to pay that price. I learned to accept that I cry little in public because, although I believe expressing one’s emotions is a sign of strength and not of weakness, I’m ashamed of my tears.

I learned that when I feel furious, angry enough to want to hit someone hard, it’s because my feelings get hurt and if wounds are very deep, they will struggle to heal.

I learned to love my children by letting them be themselves, even when this escapes my understanding, to support their dreams even when this dreams are different from the dreams I had for them, to listen their voice even when it expresses dissent and disapproval towards me, without feeling guilty, because I know, deep down, to have done my best to be a good mom.

To learn about me coast me a lot, I had to sweat and come to terms with myself, with reality and possibilities and I’m not willing to belittle myself just because my man is not willing to make the same effort for himself because each relationship must be composed of TWO people who equally invest their efforts and feelings to make it last.

Not by a quarterback and a cheerleader, or an actor and an extra, or a purebred horse and a carthorse.

Mae West said never let a man put anything on you except, perhaps, his umbrella.

Coco Chanel said a woman should be two things: who and what she wants.

So, although with men I continue to find myself in the same situation of conflict and ,often competition, I decided to hold on, to defend who I am, to continue to evolve in best and to never, never agree to make myself smaller so a man can feel bigger.