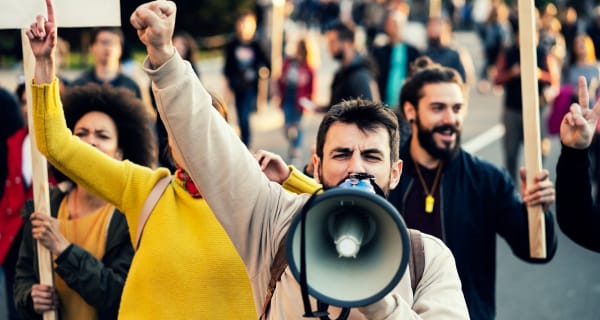 Conventional wisdom tells us that America is hopelessly divided. Many of us are still reeling from a starkly polarizing election, and these divisions will be on full display at the inauguration and counterprotests later this week. And yet, underneath deep political and ideological differences, we see a shared drive for dignity—for ourselves, our families, and our communities. Our challenge is figuring out how to more clearly see the experiences and aspirations that connect us.

In our Creativity and Free Expression program, we’re exploring how to do this through the arts, journalism, and film. How can creative and documentary work help build a fairer and juster society? One answer can be found in the JustFilms initiative, which supports efforts to reduce inequality through artist-driven film, video, and emerging media, with a special focus on documentary practices. The projects and people we support inspire imaginations, disrupt stereotypes, and inform our understanding of the world around us.

Seven of those projects are among the films featured at this year’s Sundance Film Festival, taking place January 19-29:

These are all necessary stories. Documentary filmmakers are some of today’s most profoundly socially engaged artists, and their work can be a powerful vehicle for change. They have the potential to bridge divides, to build empathy, and to inspire solutions to some of society’s deepest problems. But in order to have that kind of impact, filmmakers need to align creative, financial, and professional support as well as distribution systems that make it possible for them to reach a wide range of audiences.

In many societies, we see a backlash against diversity, inclusion, and creative and free expression—and because of its transformative potential, the viability of documentary film is threatened. In this climate, promoting and protecting social justice storytelling will require a more resilient, inclusive, and equitable 21st-century arts and media infrastructure. JustFilms works to help build that infrastructure and to connect artists with the tools and talent they need to do their best work, amplify their message, and extend the impact of their projects.

This includes grants that support:

To ensure that organizations are equipped to make lasting progress, we’re also investing in six organizations and networks that are essential to the ecosystem of social justice storytelling globally: BritDoc Foundation/Good Pitch, Firelight Media, Independent Documentary Film Festival Amsterdam, Independent Television Service, Tribeca Film Institute, and Sundance Institute. Drawing on lessons learned from Ford’s many decades of grant-making in film, JustFilms will provide these organizations with multiyear general operating support and resources aimed at institutional strengthening. A small number of other organizations will be added in the coming years.

This support is part of an effort we call BUILD, under which we invest in strengthening the core capabilities of social justice institutions that are working to challenge inequality. By participating, these organizations are committing to work more closely with the foundation and with each other over the next five years, to grow and learn together, and to share the knowledge that results—both within their own field and across others. Importantly, all the organizations participating in BUILD are determining for themselves which core capabilities they aim to strengthen. But their combined efforts will bolster the nascent field of social justice storytelling around the world.