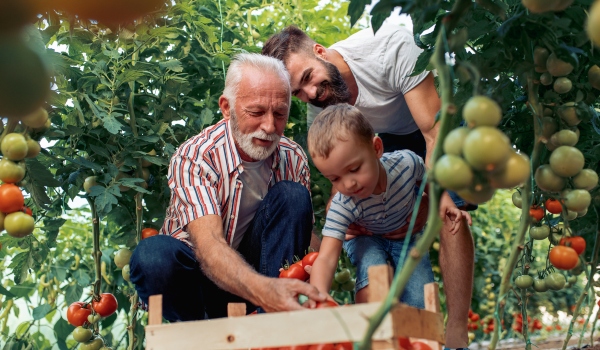 —
Agriculture has had to continually adapt to sustain the rising population with enough food. In the current situation, the amount of arable land is being depleted by the emergence of cities and industries around the world, as well as the degradation of existing agricultural land.The development of non-farming activities over the past 250 years after the Industrial Revolution partnered with the exponential growth of the population has created a rising demand for agricultural output as well as increased investment into agriculture to produce an increased output (Riggs 267). In light of these trends, new technologies and strategies are used to create high-density farming. High-density farming is producing a higher yield of production in a smaller area.

Food is one of the basic human needs and too many are going to sleep hungry around the world. Of the seven billion people living on Earth, over 870 million people are hungry of whom 98% are in developing countries (wfp.org). New technologies and strategies have kept that number from becoming even higher but as the population rises, the land to grow food decreases from causes such as urban sprawl and overuse. Also, many people are malnourished meaning that they have a deficiency of some or all of the nutritional elements necessary for human health. It is now necessary to produce more food on fewer land acres and that food needs to be diverse. High density farming strategies are doing just that.

This type of farming fulfills a meaningful livelihood for many producers. The income received from this strategy gives economic stability to the farmers. In return, this stability allows the families a better sense of security.

Horticulture institutes as well as governmental agencies belonging to the committed services and sales cluster have developed strategies of high density farming and provide the information to farmers in rural areas through demonstrations, seminars, field visits and training days.

Households are practicing high density cultivation as a form of self provisioning, making food for themselves as well as selling their excess production.

The most important aspect of high-density farming is raising food production and utilizing the land in a better way. As more people inhabit the Earth, they need land to live on, which takes away a great deal of our arable land. The total potential arable land is about 41.4 million square kilometers while the population is over 7 billion people (fao.org).

Air and atmosphere, water, and land are all resources used in high density farming. Water usually is used in the form of drip irrigation. All of these resources must be conserved in order for this strategy to be sustainable in the long term.

Another key resource that is needed is initial knowledge on intensive farming. Some crops do not increase their yield when grown in high densities, and proper handling in production is needed to prevent any soil erosion. On the other side, in order to sustain and keep the environment workable, knowledge of soil, climate, water control, and the other plant and animal species is very important (Netting). In the same sense, high density farmers must look at neighboring ecosystems and make sure that their strategies are not putting undue stress on other resources other than land and will not affect or hurt their surrounding vital resources.

High density farming is claimed to have started in 12th century China as a result of population pressure. The Chinese began multi-cropping, reclaiming land and extending land use to inferior or difficult terrain and increasing output by fertilization and the introduction of higher-yield varieties (Netting).

In order to intensify farming, strategies of intercropping, manuring, composting, crop rotation, diversification, terracing, fertilization and irrigation are all employed (Conelly and Chaiken). Effective high density farming strategies avoid the threat of severe environmental deterioration that is often seen as a consequence of rapid population growth. The diversification and knowledge of the crops needed for intercropping and polyvariety keeps the soil fertile and reduces erosion. Gardeners in Singapore grow leafy vegetables and compensate for irregular rainfall with man-made ponds which provide the water for their vegetables, livestock and fish (Netting). This shows that high density farming can be a commercial operation incorporating market crops and livestock production.

Many farmers have been intensifying their home gardens using high-density farming. These smallholders have only a small portion of their own land to work with and thus must take care of it and make sure that the soil will be ready for the next growing season. Intensive cultivators around the world classify the workability of soils, the amount of absorption and retention and the response to fertilizers (Netting). Knowledge is passed down orally within folk ecosystems. The Philippine Hanunoo swiddeners can even distinguish up to 430 different cultigens and recognize 10 basic and 30 derivative soil and mineral categories (Netting).

A strategy for creating greater abundance as well as decreasing degradation of soil is the practice of intercropping. For example, the Javanese multilayer agroiforestry, with a canopy of durian and mango trees that provide shelter for an under layer where they grow bananas and coffee with taro and cassava at the ground level (Netting). Not only do they sustain their yield year to year, but the intercropping reduces soil degradation because the roots of the trees lift nutrients up from the soil and the leaves are used as mulch later on. This highly diversified strategy “prevents overall crop failure, while intercropping is likely to reduce insect pests, and multiple crops with different work requirements smooth out farm labor expenditures over the year” (Conelly & Chaiken 22).

Intercropping as well as agro-forestry (as for example in Thailand) allows small agriculturalists to diversify their crops and provide their families the appropriate nutrients needed to be healthy.

In Java and Indonesia, farmers sell any excess production from these home gardens and bring in up to 20% of the household’s income, while only taking up under 10% of their time which provides higher return to labor (Netting).

India is the number one producer and consumer of bananas in the world, a crop which provides livelihood security to marginal farmers throughout the country (kvkcard.org). It is vital for poorly resourced farmers to obtain maximum income per hectare of cultivated area since 70% of banana cultivation is done on leased lands (kvkcard.org). In 2007, Kerala Agricultural University created a strategy to grow banana trees closer together and using dwarfed varieties of the plant. It was implemented through demonstrations, seminars, training dates and other field visits to the local farmers. Farmers whose land initially yielded 8.2 tons per hectare, produced 27.74 tons per hectare with the high density cultivation (kvkcard.org). In addition to a higher yield, the compacted plants help utilize water by micro irrigation and fertilizer in a more efficient way by increasing the root density of the plants. The stronger plants then resist wind and often times do not have to be staked vertically also saving the farmer money (Biswas & Kumar). According to the strategy developed by the Indian Institute of Horticulture Research in Bengaluru, farmers must use dwarf scion varieties, adopt dwarfing rootstock, efficiently train and prune the plants, as well as use plant growth regulators (Biswas & Kumar). By having the plants so close together, the fertilizer is more efficiently used on the plants. Fertilizer dosage can be found here. The use of fertilizer depends on the geographic location in which it is applied, but overall there seems to be an overall increase in the use of fertilizer. And to complete the process growth regulators are sprayed on the fully developed plants to improve size and quality. Fertigation saves labor, time and uniformly distributes nutrients, but the process creates conditions conducive for disease infestation.

Guava production always had a problem with increasing production due to its giant tree canopy. High-density spacing allows the farmer to manage the canopy by pruning and thus creating better light distribution. (Singh). The standard distance in plants is six (row to row) by six (plant to plant) meters apart but with high density farming, the farmer can utilize more land by planting the trees three by three meters or even one and a half to three meters (Singh). In return more branches receive light, have room to grow and produce multiple buds. The higher density of the plants causes an erect growth and gives a higher yield per unit area in the early years of production. Fertilization of the trees depends on the age and spacing of the tree as well as the time of year. As the trees age they require more fertilizer but the closer the spacing the fertilizer is more efficiently used. Drip irrigation is the proposed form of watering, which limits the amount of water per volume of soil instead of flooding it. This process has increased yields by 40% while decreasing use of water by 40-50% (Singh). Fertilization and drip irrigation tables can be found here. High density guava planting requires mulching at the edges of the fields as well as some pesticides to kill insects and prevent diseases. This specific strategy was developed by the Central Institute for Subtropical Horticulture in Lucknow, which is in Uttar Pradesh in northern India.

High density farming is not effective in growing all crops and research is very important before applying the strategy. When high-density farming is utilized it is important that the land and resources used do not affect the other crops in the area. High-density monoculture can cause runoff and use up many of the resources that are needed by surrounding crops, and have other ecological and social effects. The land with high-density farming may have fertilizer or pesticide runoff that hurts surrounding ecosystems and crops (Honculada Primavera). An example of this occurrence includes prawn farming in the Philippines. By transforming the original mangrove landscape into ponds, there has been water supply reduction, decreases in previously produced crops and marginalization and displaced labor of farmers who once grew those crops (Honculada Primavera). This creates a scarcity of the affected crops as well as the farmers whose crops are being tainted or killed. Using high density farming strategies like intercropping and agro-forestry are ways to prevent these negative effects of monoculture.

Regarding the use of fertilizers in high density farming, due to the close proximity of the crops, fertilizer is being used more efficiently than it was in the past. But as farmers increase their production and use the same fields year after year, the amount of fertilizer needed increases. By this point, most farmers have made enough money from their higher production to pay for these fertilizer costs. This reliance on fertilizer though is not sustainable and other alternatives should be implemented to creating sustainable abundance.

Fertilizer as well as pesticide runoff has occurred and hurt neighboring ecosystems. Some ways this hurts surrounding ecosystems is when the antibiotics and chemicals from the two products lead to resistant strains of pathogens that can later damage the crops (Honculada Primavera). Determining pest-control alternatives would be the next step for these farmers.

The most preferred form of watering is drip irrigation and the cost of implementation and maintenance for the farmers can be a large obstacle for small scale agriculturalists who lack the money.

This post was previously published on Commonsabundance.net and is republished here under a Creative Commons license CC BY-ND 3.0.