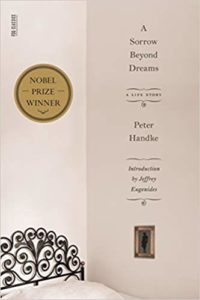 “Terrible things are happening outside… poor helpless people are being dragged out of their homes. Families are torn apart; men, women and children are separated. Children come home from school to find that their parents have disappeared.”
– Anne Frank (January 13, 1943)

As I write, terrible things are happening outside. The President has condemned the Kurds, our allies, to death. He’s allowed more than a thousand ISIS fighters to break out of prison, some surely bound to come here and kill us. And he’s turned the White House into a bunker, knowing he’s safe as long as Mitch McConnell has his back. It’s too much to bear — and yet we bear it.

In the midst of this nightmare, Peter Handke won the Nobel Prize for Literature. For many this was an outrage. Jennifer Egan, PEN America’s president: “We are dumbfounded by the selection of a writer who has used his public voice to undercut historical truth and offer public succor to perpetrators of genocide, like former Serbian President Slobodan Milosevic and Bosnian Serb leader Radovan Karadzic. At a moment of rising nationalism, autocratic leadership, and widespread disinformation around the world, the literary community deserves better than this. We deeply regret the Nobel Committee on Literature’s choice.” [For a strong, factual condemnation of Handke — “the Bob Dylan of genocide apologists” — click here.]

It is true that Handke spoke at Milosevic’s funeral. It is also true, as he has said, “I never denied or played down, not to speak of sanctioned, any of the massacres in Yugoslavia.” Last week, about the Nobel Prize, he said, “I’m not a winner. They chose my work. As a writer, you are born as a guilty person.”

Sometimes life is simple. For money — so he can build hotels in Turkey — our President has become a war criminal. Sometimes life is complicated. Whatever you may think of Handke, he wrote at least one great book. The New York Times reviewer called it “a major memorial to a host of buried German and Austrian lives, the best piece of new writing I have seen in several years.” For me too. And one more thing: we are, it seems, unable to respond to the suffering of many. But one life — Anne Frank, after she was dead, and Handke’s mother — still touches us. And that’s not just a reminder that we are still human. It can be a start of a larger awakening. So… this book.
—-
The Sunday edition of the Kärnter Volkszeitung carried the following item under ‘Local News’: ‘In the village of A. (G. township), a housewife, aged 51, committed suicide on Friday night by taking an overdose of sleeping pills.’

That’s the opening of Peter Handke’s 96-page account about the suicide of his mother. It takes perhaps an hour to read. But like the best of Handke, “A Sorrow Beyond Dreams” stays with you, both as an example of great writing and, even more, as a chronicle of a representative German life. [To buy the paperback from Amazon, click here. For the Kindle edition, click here.]

Handke is not widely known in America, which may be just as well — he has always courted controversy and taken unpopular positions. In 1966, when he was just 24, he achieved the kind of reaction that only a few playwrights crave; during a performance of his play “Offending the Audience,” theatergoers become so infuriated that they rushed the stage. The next year, at a conference at Princeton University, he accused Günter Grass and Heinrich Boll of writing “mere description” about social issues. In 1996, he wrote that Western media demonized the Serbs during the Balkan War. And in 2006, the ultimate outrage: Handke spoke — in Serbian — in support of the man whom many regard as a war criminal.

Handke was once the Bright Young Man of German writing. “A Sorrow Beyond Dreams”, written in two months in 1972, is the best argument for that exalted reputation. Ironically, it’s not a literary document. It’s a horror story, pure and simple.

Handke’s mother — he never gives her a name — grew up happy. Her father had done what no peasant in his family had managed: He owned a house. He saved prodigiously, lost his money in the inflation of the 1920s; he scrimped again, only to lose his money in the Depression. Still, his daughter was “high-spirited”, an attractive girl with no sense that adulthood for uneducated women was a crushing series of reduced expectations.

So Handke’s mother didn’t see World War II as a nightmare; for her, it was an adventure that broke the bonds of her limited world. (“’We were kind of excited,’ my mother told me. ‘For the first time, people did things together.’”) She met a married soldier, became pregnant (with Peter), then sealed her fate with a marriage to a soldier she didn’t love. Another child followed. And a self-administered abortion.

Her life was split; she had “a certain chic”, but couldn’t find a way to express it fully. And then, after the war, the “speechless moments of terror” begin. The husband drank. Which led to wife-beating. She kept silent, she “had learned her place.”

Poverty ground her down. I’ll spare you the account, which is exactingly described — it’s real poverty, not the movie kind. Handke struggles to remember the big things, the important things, but what he mostly finds is small, and all the sadder for smallness: “From her childhood days my mother had a swollen scar on her index finger; I held onto it when I walked beside her.”

It’s not a straight trip to the bottom. There’s a sudden, final flowering. “My mother had not been crushed for good,” Handke reports. She began to read, took an interest in politics. “She learned to talk about herself; and with each book she had more ideas on the subject. Little by little, I learned something about her.”

It was too late. An animal despair overwhelmed her, sank her; her sorrow was so deep no one could rescue her. When he heard of her suicide, Handke writes that he was “beside myself with pride” — she’d found a way out.

And so he began to evoke her life:

My mother has been dead for almost seven weeks; I had better get to work before the need to write about her . . . dies away and I fall back into the dull speechlessness with which I reacted to the news of her suicide.

He does get beyond “dull speechlessness”. But can a writer who sees himself as a writing machine break through to his true feelings? Will he get beyond the standard emotions to communicate the horror of a thwarted life? How, in the end, does a son tell the story of a mother whose only triumph may have been her death?

No account I have ever read of a woman’s life by her child deals with such questions. “A Sorrow Beyond Dreams” stands alone.