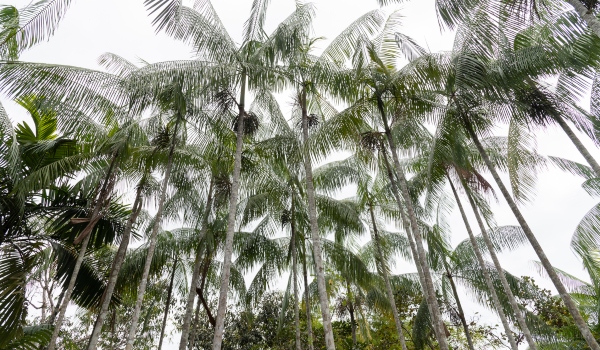 —
Brazil – You might not believe this from reading the news, but the oil palm industry isn’t necessarily synonymous with environmental destruction.

At least, not everywhere.

That’s the conclusion of a recent report from the Center for International Forestry Research by Frederico Brandão and George Schoneveld that takes stock of the oil palm industry in Brazil.

“The oil palm sector is known worldwide for having tremendous negative environmental impacts, but the Brazilian case shows that oil palm does not necessarily mean deforestation,” said Brandão.

Oil palm on a large scale is still emerging in Brazil. The nascent industry dates back to the 1970s but there were only a few small players until big national and international investors started to take an interest a decade ago. The main force driving the expansion of oil palm in Brazil was the country’s 2005 Biodiesel Law, which sought to reduce its dependence on imported fuels. Also aiding growth was the boom in global markets for vegetable oil, particularly in India and China.

Brazil produces only a fraction of the global whole – Indonesia and Malaysia continue to dominate – but it nevertheless offers other countries important lessons for ways to keep palm oil sustainable.

LAW OF THE LAND

If deforestation has not yet followed oil palm expansion in Brazil, it’s largely because of the country’s regulations containing environmental and social safeguards.

“The Brazilian government has invested a lot in environmental management, in trying to reduce deforestation,” Schoneveld said.

For example, in 2010, the government created the Sustainable Palm Oil Production Program and the Agro-Ecological Zoning of Oil Palm in Deforested Areas of the Amazon, which restricted oil palm cultivation to areas that had already been cleared, and built credit incentives to enable family farmers, or smallholders, to participate in the sector.

Regulations were backed up by mechanisms to monitor and enforce policies. A key for doing that has been making sure that individual property rights are officially delineated and registered with the state, said Schoneveld.

“If the government detects through remote sensing that deforestation occurs, they can look at property maps and say ‘this person deforested’: It’s much easier to ascribe responsibility,” he said.

“I doubt that we would have seen smallholder-inclusive models in Brazil’s oil palm sector if the state had not provided mechanisms to stimulate smallholders,” Schoneveld said.

As a result, farmers that qualify for financing schemes can end up much better off than their neighbors. By one calculation, oil palm farmers earn 4.9 times more than the average household in the area and 4.5 times more than those growing cassava, the most common crop.

Brazil’s achievements in the sector don’t negate the fact that it’s not all smooth sailing, and that oil palm cultivation does come with adverse impacts.

Environmental damage beyond deforestation has been documented, including the pollution of small rivers. There have also been some land conflicts, says Brandão, and an influx of migrant workers to plantation areas has led to increased social tensions and overloaded social services.

Is it really benefiting the poorest of the poor – the people that truly need to be lifted up from poverty?

George Schoneveld
A recent shrinking of the sector also creates a risk that a surge in unemployment could put pressure on already precarious regions.

Brandão and Schoneveld also found that income disparity between those who participate in oil palm schemes and those who don’t could lead to inequalities, especially since the increase in income has reportedly not had a knock-on effect for communities.

And then there is the issue of how inclusive the models really are. To benefit from the necessary loans, participants must meet several eligibility criteria to minimize risks to food security and credit defaults.

“Is it really benefiting the poorest of the poor – the people that truly need to be lifted up from poverty?”

A confluence of economic forces has put the future of Brazil’s oil palm industry on shaky ground.

Higher costs for labor – Brazil has the highest of all 44 countries that cultivate oil palm – and transportation mean that Brazil has a tough time competing on the international market, especially with recent falls in the price of crude palm oil.

And although a desire for homegrown biodiesel helped kick off the industry’s resurgence a decade ago, little oil palm is being directed to biodiesel as costs are higher for oil palm than for other oils, like soybean.

Indeed, in recent years, some of the biggest companies in the sector seem to be trying to pull out.

“Large companies are facing more difficulties while the medium ones are more consolidated,” said Brandão. “This suggests that policies to promote inclusiveness should be more oriented towards small and medium companies’ interests rather than large corporations.”

If companies do pull out, others may take their place, but it’s not certain whether those companies would be willing to follow the same model, although the strong federal commitment to the sector suggests that the smallholders who engaged with those companies won’t be left to fend for themselves.

Brazil seems to be at a crossroads: the signs indicate it could position itself well in the market for sustainably sourced palm oil – but only if the economics align and consumers will accept higher prices for the environmental and social benefits.

“It’s quite uncertain how the sector is going to evolve and whether it’s a long-term solution to poverty in these areas of the Amazon,” said Schoneveld.

Previously published on forestsnews.cifor.org and is republished here under a Creative Commons license.