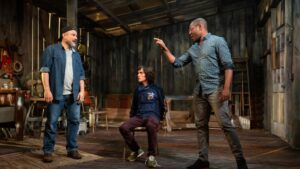 Testosterone and tempers fly amongst a plumber, college professor, and frightened 15 year old, who we meet in a rickety shed as they (almost literally) bat around the disturbing disappearance of a neighborhood eight year old girl at a lakefront.

When a character enters in a chokehold, you know you are in for a rough ride.

Ethan, an ivy league professor who teaches comparative literature, gets into an intense verbal spat with plumber Phil when he stumbles on him in the shed with Jamie who he is forcefully holding against his will tied to a chair.  Phil is certain Jamie is troubled and is to blame for the missing girl, given that that he was the last to see her, and that there was a recent incident where a cat was deliberately set aflame because it was killing birds.  We don’t know whether to believe that Jamie is capable of serious wrongdoing or whether he is just a victim of Phil who seems to have his own emotional demons.  What justifies tough guy Phil to attempt to take matters into his own vigilante hands, we never quite understand.

Ethan tries diplomatically to convince Phil that they should contact the police about Jamie, but Phil threatens to force Jamie to confess via other less pleasant means.  Ethan and Phil become verbal sparring partners reflecting class differences, religious beliefs and more, and the play endeavors to dig deep but begins to ramble as it unravels.

The hard-working cast features Obi Abili (Ethan), Enrico Colantoni (Paul), and Alexander Garfin (Jamie).  They give the material their all and turn in strong performances.  They are tightly directed by Tea Alagic, who does her best with all that is at stake.

While FEAR is intense, ambitious and attention-getting, since I never felt emotionally vested, even though just 80 minutes, it felt overwrought.

Making its world premiere, FEAR, written by Matt Williams, is playing a limited run through December 8, 2019  at the Lucille Lortel Theatre in NYC.

MATT WILLIAMS (Playwright) is the author of numerous plays including Between Daylight And Booneville (Kennedy Center and Off-Broadway), Bruce Lee Is Dead, and I’m Not Feeling Too Good Either, and a professor of playwriting at Columbia University. Williams created and produced “Home Improvement,” was a writer/producer of “The Cosby Show,” and created “Roseanne.”  He directed the world-premiere musical Open Heart and produced The Bubbly Black Girl Sheds Her Chameleon Skin Off-Broadway.  His various film credits include What Women Want, Where The Heart Is, What Men Want and The Keeping Room.