Fayżī set out to prove his literary and linguistic virtuosity by composing an entire book in Arabic without using a single one of those 13 letters of the Arabic alphabet which contain one dot or more.

March 19, 2020 by Asian and African studies Leave a Comment 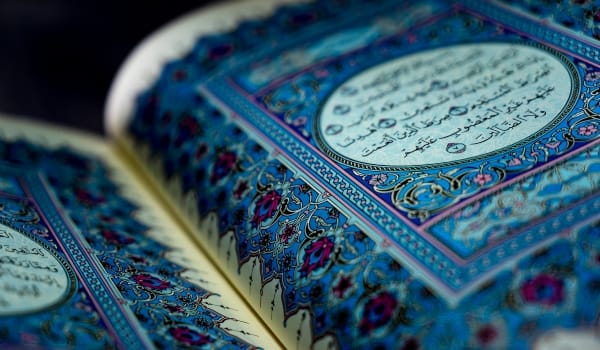 Imagine yourself in this situation: you sit down to write a book, but almost half of the letters of the alphabet are ‘out of bounds’. That was the challenge faced by Abū al-Fayż Fayżī, scholar, physician, poet laureate and – like his brother Abū al-Fażl ‘Allāmī – favoured courtier of the emperor Akbar. Fayżī set out to prove his literary and linguistic virtuosity by composing an entire book in Arabic without using a single one of those 13 letters of the Arabic alphabet which contain one dot or more. Not a simple book, mind, but an elaborate treatise, over 100 pages in length, on ethics and government. 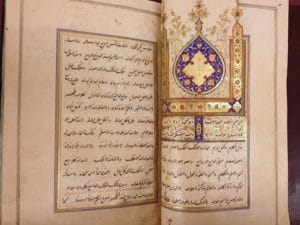 Fayżī successfully accomplished this tour de force, and the British Library has an illuminated copy of the text in question, Mawārid al-kalim (‘Sources of [Wise] Sayings’) to prove it. Our manuscript, Or. 16284 (purchased in 2006), is dated 1256, equivalent to 1840 to 1841. The treatise is preceded on folios 1v-2r by a series of verses in Persian in which the author brazenly – but with undeniable elegance – applauds his own achievement. Here is a translation of one (f. 2v, see below) of a series of two muqaṭṭa‘āt (‘fragments) and five rubā‘īs (quatrains with rhyming lines AABA):

This grace, which has poured down from the Realm of “No doubt” –
its writing, pearl-pointed, all poured forth from my bosom.
An epiphany from Vision’s bowers, before dawn
it moved but once, and fruit poured from the Realm Unseen. 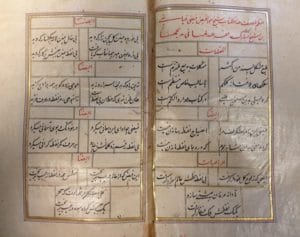 Nor was this Fayżī’s only venture in the arguably pointless, but far from dotty, field of bī-nuqṭah (‘without dots’) composition. His commentary on the Qur’ān, Sawāṭi‘ al-ilhām, is also written entirely using entirely dotless letters. There is an anecdote which illustrates the relationship between Fayżī and his brother Abū al-Fażl, on the one hand, who were confidants of the freethinking emperor Akbar, and the famously orthodox (in most respects) Sufi Shaykh Aḥmad Sirhindī. A young scholar from Punjab, Sirhindī arrived in Agra to seek his fortune. Admitted to the two brothers’ literary circle, he showed his brilliance by completing a passage of Fayżī’s commentary where the latter had been at a loss. According to Kishmī’s Zubdat al-maqāmāt, a hagiography of Sufis of the Naqshbandi Order (lithograph ed., Kanpur, 1890, p. 132) Fayżī himself marvelled at the eloquence of Aḥmad Sirhindī’s solution. Before very long, however, as was probably inevitable, Sirhindī fell out irrevocably with Fayżī and Abū al-Fażl as a consequence of fundamental differences concerning religious matters.

The text of the treatise ends on folio 55v, but Fayżī, intent on gilding the lily still further, appended a couple of passages. In one (56r-v), for an entire page he eschews all the undotted letters, using only dotted ones. In the second (56v-57r), which reverts to undotted letters, this time in Persian rather than Arabic, he again praises his own writing and informs us that Mawārid al-kalim was completed in the middle days of Muḥarram (the first month of the Islamic year), with Leo in the ascendant, the sun in the sign of Aries and the moon in Aquarius. Finally, and rather enigmatically (for the abjad numerical values of the Arabic letters do not seem to bear out his claim), Fayżī announces that two phrases (or words: kalimah) on the last lines (see below) indicate the title of the work, the month in which it was written, and the year in which it was written. Perhaps our readers can solve this puzzle for us… 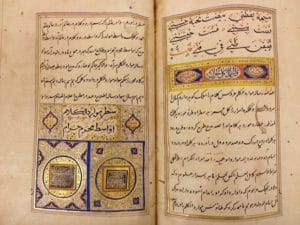