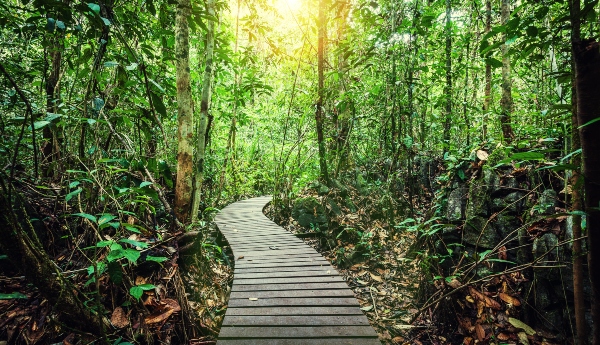 When Fachruddin Mangunjaya was researching his master’s dissertation in 2006 on attitudes toward wildlife conservation in Indonesia’s Islamic boarding schools, or pesantren, he got a lot of blank stares from his friends.

“They said, ‘Why religion? Why are you connecting this with religion?… How do you make the connection between pesantren and the environment?’” he recounted, at his spacious office in Jakarta’s National University (UNAS).

His reception today is rather different. Over the last decade and a half, Mr. Fachruddin pioneering work in Islamic environmentalism has gone from fringe to mainstream. He has trained more than 1,000 Indonesian clerics in using theology to promote conservation, equipped teachers at over a dozen schools to become “eco-pesantren,” and helped shape the international Islamic Declaration for Climate Change in Istanbul in 2015.

As the writer or editor of 22 books and dozens of journal articles, he has done more than any other single person to shape both the theory and practice of Islamic environmentalism in Southeast Asia.

Mr. Fachruddin’s first love was leeches. He grew up in Central Kalimantan, on the island of Borneo, in a town on the edge of a rubber forest. His family members were pious Muslims, and his grandfather was a qadi, or Islamic law expert, though Mr. Fachruddin himself was sent to state schools and not a pesantren. A youthful encounter with the renowned Canadian anthropologist Birutė Galdikas, who was researching orangutans in Borneo, set him down the path of biology.

He spent school holidays working as a guide in Tanjung Puting National Park, and Galdikas counseled him to focus on something other than primates, which was becoming a crowded field. So he picked leeches, familiar to him from forest treks, and started sending in samples to research institutions from Borneo while still a teenager. He went on to study them further as a promising young biology undergraduate at UNAS.

He enjoyed his studies there but, as the years drew on, was gripped by a sense of dissonance.

“Our education was completely secular,” he said. He would go to Islamic study groups with his friends, pray five times a day, and go regularly to the campus mosque. But as soon as he entered the classroom, he felt he had to leave that part of his life outside. He found this strange, because what he was studying independently as part of his “religious” life was deeply linked to his coursework, such as through authors like Iranian-born intellectual Seyyed Hossein Nasr, a foundational thinker on Islam and environmentalism.

“One of my favorite Quran verses is this,” said Mr. Fachruddin: “And there is no creature on the Earth or bird that flies with its wings except that they are umma [the community of believers] like you (6:38).” To him it’s a clarion call to conservation.

In his body of work, he has scrupulously collected Quran and hadith (sayings of the prophet) verses as well as excerpts from other texts like the Malay Islamic book Sabilal Muhtadin, contextualizing them alongside modern conservation goals like fighting deforestation and decreasing waste.

His earliest outreach work was with clerics at schools near Gede Pangrango and Halimun Salak national parks in Java, where students were trained in conservation – both parks are home to numerous endemic bird species, for instance – using Quran and Hadith verses for support. Eventually his philosophy of environmental pedagogy combined with theology led to the creation of “eco-pesantren,” Islamic boarding schools that prioritize environmentalism. There are over a dozen such schools in Indonesia today, and among the most prominent are Darul Ulum in Sukabami and the Junior Daarut Tauhid school in Bandung, West Java.

At Darul Ulum, a seven-hectare riverside area was decreed harim, a forbidden zone for development – the word is related to the Arabic word haram, “forbidden”– and 700 trees, including mango, avocado and durian, were planted on-site. School administrators say the scheme, which was inspired by the Prophet Muhammad’s own actions to protect resources in the Arabian peninsula, has significantly improved their land and air quality. Every student at the school is required to plant a tree before they graduate.

At another eco-pesantren, the Al-Haramain eco-pesantren in West Lombok, a social forestry project involving students and families has reforested 31 hectares of land, where local families can plant and harvest trees according to a community-made business plan.

Mr. Fachruddin’s philosophy has now gone beyond the classroom.

“Last week I went to Riau and met with 84 clerics from three provinces,” said Mr. Fachruddin. “The clerics didn’t only come from pesantren, but also from the kampung,” or villages. He trained them about the dangers of haze and burning crops and trees and prepared a Friday sermon pamphlet that they could use to educate congregants about how to combat forest fires on a grassroots level.

As his movement has grown, Mr. Fachruddin has consulted for bodies like the United Nations. In 2015, he worked with Muslim leaders from countries as far as Morocco and the U.K. to draft an Islamic declaration on climate change.

Mr. Fachruddin’s academic and experimental work runs against a backdrop of a larger cultural shift in both his country and the world at large. The United Nations’ Sustainable Development Goals (SDGs) put religion front and center in its 2030 Agenda, noting that about 80 percent of the world’s population follows some kind of faith and that religious communities everywhere can “leverage the considerable financial, moral and ethical influence at their disposal” in the service of conservation and environmentalism. Their report noted that nearly all faiths argue, in their own way, that “there are legitimate and illegitimate uses of nature” and that “greed and destructiveness are [condemnable].” Pope Francis also issued an encyclical in 2015 entitled “Laudato si’,” criticizing unchecked consumerism and development and calling for “swift and unified global action” on climate change.

Inside Indonesia, the national council of Muslim clerics issued a fatwa on climate change in 2010. And the country’s largest Muslim organization, the civil society group Nahdlatul Ulama, has also taken a green turn in recent years.

“We’ve been interested in the environment for quite some time now,” said Ali Yusuf, who leads Nahdlatul Ulama’s Disaster Management and Climate Change Institute. “In 2007 we created a ‘national front’ for the environment, in 2010 we had a climate change conference, then we created a NU Green Movement, then branched out into water conservation, energy conservation, planting trees, and so on.”

“The Indonesian religious tradition is quite easy to intervene in,” opined Mr. Fachruddin, “because of the democratic situation. And also because we’re a moderate country, and easy to adapt.”

This article was produced with the support of the USC Center for Religion and Civic Culture, the John Templeton Foundation and Templeton Religion Trust. Opinions expressed do not necessarily reflect the views of these organizations.

Previously published on news.globallandscapesforum.org under a Creative Commons License.