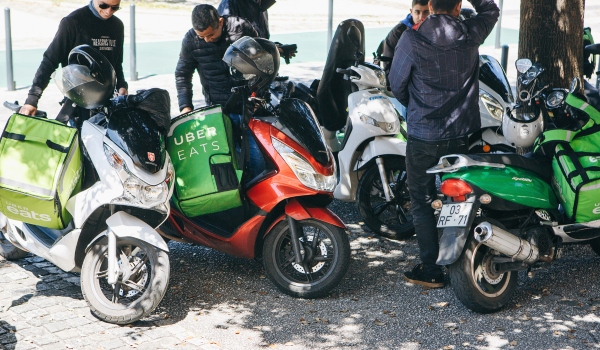 Uber, Gojek and Grab have flooded the urban transportation market, branding themselves as middlemen between drivers and customers. Drivers are said to be “partners” or “micro-entrepreneurs” who can decide how much money they want to make, any time they want.

My recent study, however, reveals that such an image is at best misleading, at worst deceptive. I spent six months (November 2016-April 2017) analysing hundreds of testimonials from Indonesian drivers’ online forums on Facebook and Google+ with more than 80,000 members. In addition, I talked to ten drivers based in Jakarta, Semarang, Yogyakarta and Makassar in mid-2017.

I found that, rather than entering a partnership, drivers are entering an exploitative relationship in which they are treated as sweated labour with little to no working protection.

Using technology and rhetoric, ride-hailing companies manage to dictate to drivers while simultaneously creating the illusion of equal relations. Such a system has created discrepancies in access and power, which allow the company to intensify drivers’ labour while eliminating their rights as workers and shifting costs to them.

It is true that drivers may decide to shut down the app at will. But the devil’s in the detail. Once logged in, the app heavily controls drivers – where they go, what order they take. Choice at work comes down to a matter of seconds; drivers have only about 10 seconds to choose “accept” or “reject” when an order is assigned to them.

Gojek, Grab and Uber impose a minimum daily acceptance rate to make drivers keep searching for orders. This decides whether drivers receive a daily bonus. As the actual rate for drivers (Rp1,000-2,000 or US$0.07-$0.14 per kilometre for motorcycle taxis) is not enough to be a living wage, most drivers now depend on this daily bonus.

Bonuses are given based on points. Longer distances and certain orders like food delivery are worth more points, but are also costlier as drivers must pay for petrol and parking.

The monetary value of points varies between companies. In Gojek, for instance, the maximum daily bonus is around Rp90,000 for motorbikes – and it keeps decreasing month to month. To cash in the bonus, drivers must reach a minimum 60-75% acceptance rate (the percentage of completed orders per orders assigned) and 4.5-star ratings.

Such a system resembles what I call “gamification of work”. The firm sets earning goals that prod drivers into working longer and harder. Work is not only about giving a ride but also a math game of calculating performance.

Yet the rules of the game seem to be illogical. Often, their performance rating doesn’t increase even though they have completed orders. Conversely, when drivers fail to complete a task, it falls rapidly.

One driver that I interviewed expresses it this way:

The performance is like rupiah: increase slowly but easy to fall freely.

When drivers try to report these technical problems to the company, they get a standard reply that “it’s set by the system”. But it makes no sense to them that a machine can cheat.

It must be people who cheat us.

Bonuses as incentives work hand-in-hand with suspension as disincentives to discipline drivers. Suspension is one primary strategy to enforce drivers’ compliance.

Drivers cannot reject or cancel too many orders. If they do, they risk getting locked out from the app, temporarily or permanently.

For instance, Gojek has a long list of rules that will invoke suspension, which may lead to contract termination.

Cases in Gojek and Grab show drivers cannot withdraw their money from their account when they are laid off.

The companies disguise the practices of labour exploitation under the rhetoric of freedom, flexibility and partnership. The rhetoric relies upon the conventional idea of work — where employers own the production force and pay hourly wages. The fact that the companies only provide the app is overemphasised to maintain an impression that the drivers are not employees.

Far from being a neutral platform, the app creates a hierarchy of customers-middleman-drivers. The company is at the top of the power ladder. Meanwhile, “customers act as managers” as their ratings determine the drivers’ eligibility for bonuses.

While ratings can ensure service quality, customers’ ignorance can badly affect drivers. A friend of mine was reluctant to give five stars because she thinks perfection is only for God; while for the drivers, four is a failing grade. In case of dispute, the companies almost surely champions customers over drivers. An interviewee told me Grab suspended his friend for three days because a customer’s review had mistaken him for another driver.

The image of “micro-entrepreneur” compels drivers to use their own production force (vehicles) and cover their own costs for petrol, parking, maintenance, vehicle insurance and communication.

The more they work, the higher the expense and the greater the risks.

At the end, the company wields the upper hand in determining labour terms. After cutting drivers’ subsidy, the current manoeuvre is to regularly decrease the amount of bonus as well as increase the required performance. Labor terms are frequently changed to suit the company’s interests while mechanisms of negotiation are largely absent.

Drivers have tried to organise collective bargaining via protests. But, as of 2017, the companies officially suspend drivers who initiate, co-ordinate and join any form of demonstrations.

Evidence in my research resonates with previous research and investigations into Uber’s labour terms in the US, the UK and India. Uber drivers have fought various legal battles in American and European courts to strive for their workers’ rights.

In Indonesia, the middleman companies are under almost no legal constraints in exploiting workers. A new ministerial decree on ride-hailing services covers only technical aspects, such as price caps and vehicle requirements in online taxis. However, the Supreme Court recently annulled this regulation.

Existing labour law exposes ride-hailing drivers to a legal loophole. Current regulation of minimum wage and working hours has not addressed rights and entitlements that reflect the quasi-informal type of work in the ride-hailing industry.

The global patterns of exploitation highlight the importance of having regulations that keep up with new ways of working in the digital age. It is time we moved the debate forward to focus on drivers’ labour rights.