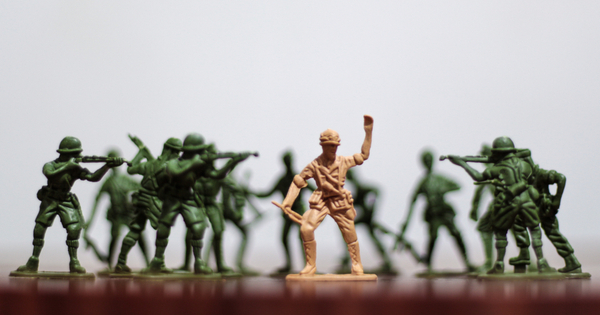 With all the money we’ve spent for defense, how can we be so defenseless?

We are at war with the coronavirus. If putting it that way offends you, try substituting “emergency” for “war.” I am absolutely comfortable calling this a war because people have died and will die and we are losing.

If we had thrown everything at the enemy and still lost, it would not hurt so much. If I don’t lose my own life, I think it’s virtually certain I will lose a family member and, yes, that is painful. People die in a war, though. It’s the idea of not fighting back with everything we’ve got that ratchets up the pain.

In the virus hot spots, we are running out of intensive care beds and will soon run out of any kind of hospital beds.

The people who are tasked to take the fight to the enemy — -doctors, nurses, and various medical technicians — -are running out of personal protective equipment. Masks, gowns, and the other things that form a barrier to keep the virus out. The shortages grow with the numbers of patients.

What is this failure to throw everything at the virus that has me so exercised?

1. The Defense Production Act gives the POTUS authority to order particular companies to produce particular items that are needed to respond to the emergency. President Trump has signed a proclamation claiming the authority but he has issued no orders.

2. The Army Corps of Engineers has a standing mission to respond to problems within its expertise. They have the ability to raise hospitals in parking lots next to the over full regular hospitals, but requires orders from the Commander in Chief.

3. The Department of Veterans Affairs has a standing mission to back up civilian hospitals if they become overcrowded because of a public health emergency, but opening them up requires orders from the Commander in Chief.

4. Two Navy hospital ships, the U.S.N.S. Comfort and the U.S.N.S. Mercy are always available to respond to civilian disasters.

5. The hero of World War II who became a two term president, the man who commanded the Normandy Invasion, had a common military specialty: logistics. That is military speak for having what you need where you need it. Military logistics has to move more stuff quicker than UPS or Fed Ex, but the Commander in Chief has to order the military to pick up medical supplies and take them to the front.

It’s a fine bit of irony that President Dwight David Eisenhower — the aforementioned hero of WWII — sold the Interstate Highway System to the taxpayers based on the need for highways wide and straight enough for military vehicles. That is, the Interstate system was built for national defense.

It’s hard to even talk about Eisenhower and Trump in the same article. Trump has faced the press every day for the last week and he has found somebody to blame for every shortcoming in the battle against coronavirus. Eisenhower gave his troops a rousing pep talk before sending them off to liberate France and then wrote a letter in his own hand “just in case:”

Our landings in the Cherbourg-Havre area have failed to gain a satisfactory foothold and I have withdrawn the troops. My decision to attack at this time and place was based upon the best information available. The troops, the air and the Navy did all that Bravery and devotion to duty could do. If any blame or fault attaches to the attempt it is mine alone.

Ike never had to use the “just in case” letter but The Donald has never had to write one. Some of us see blame for our losses in the war with the coronavirus in the five major weapons (there are probably others) that we the taxpayers have already bought. They have in common that they require orders from the Commander in Chief to get into the fight.

I have been puzzled about why Mr. Trump will not engage, particularly since he gives the impression in his daily briefings that he has engaged. These exercises in misdirection have gone on for more than a week, and I finally have a theory.

Can it be that Donald John Trump takes casualties without mobilizing available defenses because he does not know how to give a lawful order and cannot bring himself to ask people who do?

Remember when he was running for the office, he made the bizarre claim that he knew more about the military than those who served because he attended a military-themed prep school?

Remember his claim after he was elected that he knew more about military endeavors than the generals who worked for him?

Remember how, when Trump put his staff together, he kept at least one general in the top echelon, often in the job called “designated adult in the room?” The generals dropped like flies and all the adults have left the room.

Now, if General Trump wished to ride to the rescue at the head of the cavalry, he must first mobilize the cavalry. He will need a field commander, and I would recommend Lt. Gen. (Ret.) Russel L. Honoré, Gulf War veteran and one of the few heroes of the response to Hurricane Katrina.

Honoré brings a suggestion from WWII, that the government “graduate” senior nursing students and that doctors who have done their academic work should be thrown into the breach and their work recognized as their internship. Whatever you think of whether we are as desperate for doctors and nurses as we were in WWII, the fact will remain that the Commander in Chief has to pull the trigger.

My epiphany about Trump’s lack of action came when I remembered his first attempt to drum transsexual troops out of the military. He did the deed — or thought he did — -on Twitter.

The reaction of the brass was predictable. Even those who opposed recruiting transsexuals in the first place would oppose getting rid of them because the services had adapted and did not need any further uproar.

So the Joint Chiefs of Staff simply ignored the Trumpian tweet. Back then, he still had military persons working in the West Wing, so somebody showed him how to give an order.

An order to mobilize a unit not currently in the fight is a bit more complicated. Perhaps Mr. Trump is still living in the movies, where all orders are verbal and there are no after-action reports?

Tell Mr. Trump how much he resembles John Wayne. Point out that 27 states have called out the National Guard and tell him how much bigger the force he could mobilize with a stroke of his pen would be. Then put an order in front of him to the Army Corps of Engineers with a list of places needing auxiliary hospitals.

If he refuses to sign, then we know he really does not want to mobilize the Corps of Engineers. The problem will be more political than psychological, but it will still be a problem with human lives at stake.