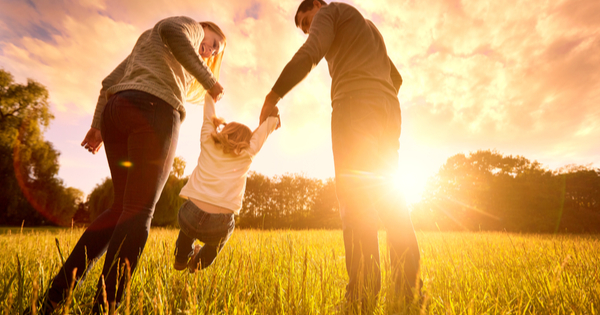 Why would men want to share power with their wives? Thirteen power-sharing young men and one “old guy” talk about their motivations, the challenges they faced in this unique effort, and the facilitators they needed to maintain their power-sharing marriages.[1] The “old guy” is my husband, Dr. Joe,* who began his power-sharing journey in the 70’s, long before it was even a thing called power-sharing.

Let’s hear what they have to say about sharing power with their wives.

To these 13+1 men power-sharing means sharing parenting and child-care, sharing household tasks and responsibilities, sharing decision-making, and mutual commitment to career and employment status. Here are a few things these men said about power-sharing:

Here is a schematic that shows how these men came to adopt their power-sharing approach to their marriages.  A picture is worth a thousand words! 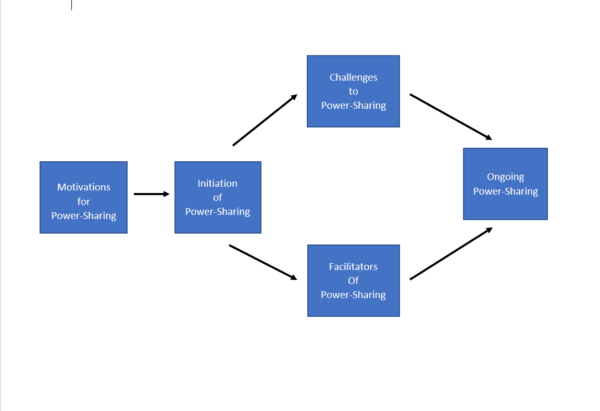 The schematic shows the idea of being a power-sharing dad develops over time and involves several steps.  First, there are the things that motivated these men to seek out such an arrangement.  These include their family backgrounds, their social and political awareness, and their interpersonal values.

These interpersonal values include having mutual respect between them and their wives, sharing life’s burdens, putting family first, and not having a gender-driven relationship with their wives.

These important thoughts and ideas set the stage for the men to initiate a power-sharing relationship with their wives.  Acting on the desire to have this kind of relationship brought these men face-to-face with the challenges and facilitators to keeping the power-sharing going.

These non-traditional men talk about three general reasons for their interest and willingness to share power with their wives: family background, political and social awareness, and an interest in having a relationship with their wives not defined in terms of homemaker-worker roles.

I don’t know if my dad ever changed a diaper…The extent he was involved in my life was he would help me practice for little league, you know, the manly kinds of things that you do.  No kind of serious discussions about anything. Emotions he left that up to my mom, he was not there for that.

All but one of the 13 men in this study talked about how their social and political values contributed to their interest in a power-sharing relationship.  These values included: equity, gender equality, justice/fairness, and non-discrimination.  For many of the men, these values were introduced in the context of their families. Here are a few examples of how social and political awareness supports their power-sharing approach to marriage.

Dr. Joe…My social justice values emerged in the middle of the Vietnam war and the beginning of the feminist movement in the 70’s.  It became clear to me that women were being treated unfairly.  I did not want this to happen in our marriage.

Here is how one man put the idea of mutual respect…“If you respect somebody, that is the way, the best way, to make [the marriage} work.”

Dr. Joe…An important part of my relationship with Catherine is my respect for her as a person.  Out partnership grew as I acknowledged her wishes and wants and we negotiated decisions we made around our respective wishes and wants.

Putting family first was the central theme for most of the 13 men who are power-sharing dads.  As noted, most wanted different relationships with their children than they had with their own fathers.  Here are some quotes from their interviews:

The 13 men interviewed and the “old guy” talked about the importance of having a partner with whom they could engage in interesting conversations…valuing a complex connection with their partner.  This value comes out in many ways:

Dr. Joe…Catherine has always been a complex person (part of what attracted me to her).  I was quieter and less expressive.  I changed over the years and we now engage in the complex discussions about our children, politics, careers, and relationship.

Most of the 13 men said that the decision to initiate a power-sharing marriage was a deliberate choice.  Many talked about pursuing a partner who also wanted this kind of marriage.  Here is how one man described it.

“Finding a partner that didn’t necessarily want defined gender roles was important. I guess from that respect, some people do want to stay home and want a husband who is going to provide even if that means working until 8:00 at night…I wanted a partner who let me define my role.”

For other of the men, power-sharing unfolded over time, often with the birth of the first child.

“I guess you don’t think about it until it is right there in front of you…you      don’t really know…until the moment [the child is born]…When she was       born, I was ready to be a father, ready to do what I needed to do.”

Dr. Joe…Catherine’s desire to go to graduate school in psychology in the early 70s sparked the beginning of power-sharing in our relationship.  I made the decision, which was at the beginning of my own career (which was a significant professional risk) to support her career on an equal footing with mine—wherever that leads us.

All 13 men described the constant challenges that need to be overcome in maintaining a power-sharing marriage.  The primary challenges they talked about were: work-family balance, the ongoing need for negotiation, barriers to career advancement, and the workplace conditions for both partners.

“I had a friend tell me that you can’t really have a two-career family.  He said you just can’t, and somebody’s career has to be dominant.  I thought he was crazy…but I have realized that, to an extent, you can’t have limitless careers…[my wife and I] both chose to kind of go 80% in our careers.”

Many of the men discussed the “painful and continuous negotiations” involved in sharing power…discuss, discuss, discuss. Negotiating collaboratively, which is the basis for creating a committed, equitable, and vibrant family and work life is fully presented in my book, A Marriage of Equals (www.marriageofequals.com).[2]

Barriers to career advancement is a significant challenge to power-sharing for these men.  Factors such as working long hours, traveling, attending professional conferences are often important demands for career advancement.  These men often talked about changing jobs or turning down jobs and being willing to make less money in order to be the kind of power-sharing dads and marital partners they wanted to be.

Both workplace flexibility and support from extended families were the biggest facilitators of power-sharing.  Several of the men described family-friendly workplaces that offered them non-traditional options such as telecommuting, compressed work schedules, job sharing, and part-time work.  Some of the men noted their workplaces offered generous paid paternity and family leave. Their jobs were often more flexible and offered more work options that their wives’ workplaces.

Dr. Joe…Being in an academic setting provided me the flexibility to be responsive to Catherine and the children’s needs as they grew up. The only responsibilities that were set in stone were my classes and departmental meetings.

The help of an extended family (parents, in-laws, siblings, close family friends) was comforting to these men and made the logistics of power-sharing easier and less overwhelming

How to Keep It Going

The 13 men and “one old guy” have openly talked about their efforts to engage in marital relationships where roles and power are shared.  Their willingness to talk about their motivations, the challenges they faced, and the things that made their effort possible are so important.  It is important because too many men seem unwilling to let go of traditional gender roles despite the influx of women, their wives, into the workforce.

For marriage—as an important social-political institution—to survive and for women to gain true equality, men must be willing to share marital power and broaden their social roles to meet that of their female counterparts. And, men must find value in power-sharing as these men have.