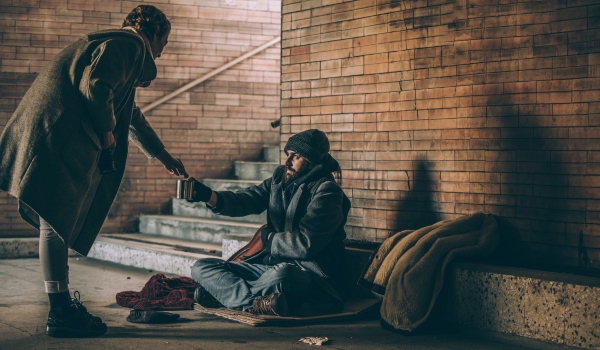 The delayed childbearing argument features prominently in the recent “consensus” on anti-poverty strategy reached by the American Enterprise Institute / Brookings working group I wrote about here. They say:

It would be better for couples, for children, and for society if prospective parents plan their births and have children only when they are financially stable, are in a committed relationship (preferably marriage), and can provide a stable environment for their child.

Isabel Sawhill, a leading proponent of delayed childbearing as anti-poverty strategy, says in her book Generation Unbound, that she is not telling poor people not to have children, but she sort of is. She writes:

It is only fair to expect parents to limit the number of children they have to something they can afford.

The evidence I offer to help argue that this approach is unhelpful includes this paper (the actual new research for the talk), which shows the risk of infant mortality rising with parent age for Black mothers, a pattern strikingly different from White and Hispanic mothers’ (see a discussion here). Here’s that result: 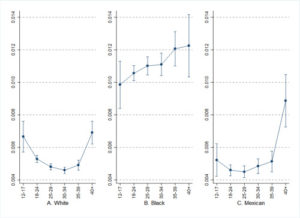 Of course, infant mortality is thankfully very rare, but it’s the extreme measure for the underlying pattern of women’s health. When infant mortality in a group is higher, their average health is usually worse.

I’m adding to that the following descriptive figures on children’s poverty rates according to how old their mothers were when they were born. This is by necessity limited to children who are still living with their mothers, because I used the Current Population Survey. I show this for all children (black lines), and then for those whose mothers have never married (red lines). The solid lines are official poverty-line rates, and the dotted lines use the Supplemental Poverty Measure. The latter shows lower poverty rates for children whose mothers were younger, because it reflects transfer income and welfare support as well as income from unmarried cohabiting partners. 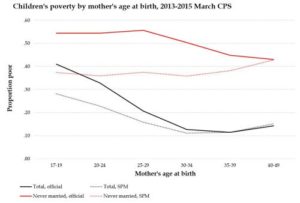 For children overall (black lines), being born to an older mother appears beneficial in terms of poverty rates. This fits the standard story, in which delaying births allows women to go further in school and their careers, and get married, as well as being more mature and so on. However, for those whose mothers remain unmarried the relationship is much weaker, and there is no relationship to the SPM. To me this undermines the policy of delay with regard to women who have low probability of marriage during their child-bearing years. Which brings me back to Black women.

I estimated the same pattern by race/ethnicity, this time just using the SPM, in a model that controls for child age, sex, nativity, geography, and mother’s marital status (ever- versus never-married). I didn’t control for education, because schooling is also an outcome of birth timing (so if young mothers don’t go to college for that reason, this would show them more likely to be poor as a result). Here’s the result: 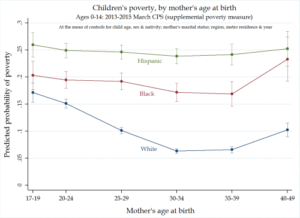 For White women there is a strong relationship, with lowest poverty rates for children whose mothers were in their 30s when they were born. For Black and Hispanic women the relationship is much weaker (it actually looks very similar when you control for education as well, and if you use the continuous income-to-needs ration instead of the poverty-line cutoff).

My conclusion is that I’m all for policies that make family planning available, and U.S. women should have better access to IUDs in particular (which are much more common in other rich countries) — these need to be part of better medical care for poor people in general. But I don’t favor this as a poverty-reduction strategy, and I reject the “responsibility” frame for anti-poverty policy evident in the quotes above. I prefer education, jobs, and income support (which Sawhill also supports, to her credit). See Matt Bruenig on the Brookings “Success Sequence” and my op-ed on income support.

Consider this from Sawhill. In her book Generation Unbound, she writes:

‘poor and minority women … themselves do not want to have as many children as they are currently having. Unintended pregnancy rates are much higher among the poor, minority groups, and the less-educated … [free, better contraception] can help poorer and less-educated women align their behavior with their intentions.’ (p. 138)

I think we need to take a little more complicated view of intentions here. She is referring to what demographers call “unintended” births, which means the woman recalls that she was not intending to get pregnant at the time — she either wanted to get pregnant some time in the future, or never. As you can see, such unintended pregnancies are very common: 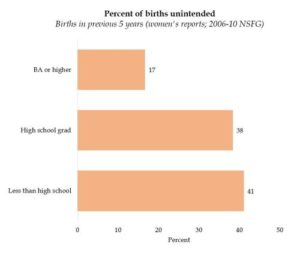 However, most poor women think the ideal family size is large. Among young women, 65% of women who didn’t finish high school, and 48% of those with high school degrees but no BA, believe 3 or more children is the ideal for a family: 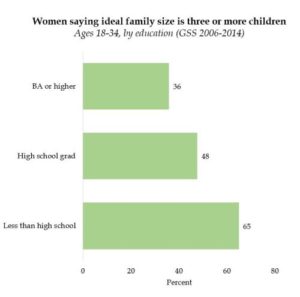 For lots of their births, poor women were not ready, or not planning to get pregnant. But it’s also common for poor people to never achieve their ideal conditions for having children — good job, marriage, housing, education, and so on. In that case, with the clock running on their (and their mothers’) health, unintended childbearing is more complicated than just a behavior problem to be solved. It may reflect a compromise between unachievable goals.

In addition to making sure everyone has the reproductive healthcare they need (including more effective contraception), I think we should also help people achieve their long-term ideals — including having the children they want to have — rather than (just) help them realize their short-term intentions.

Previously published on familyinequality.com and is republished here under a Creative Commons license.
—