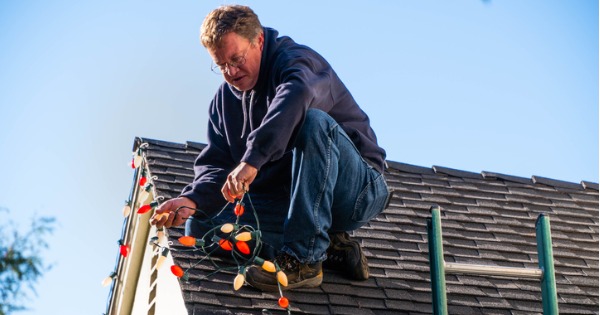 “Older than you,” I told him.  He’s twelve, and these lights have some good years on him.  I bought them years ago.  I got them on sale.

“They are basically your God Father.”

I climbed up the later and continued the Christmas tradition that started when I bought my first house.  Back then, the economy was great for new graduates.  Get this, you could work and then quit your job with the full knowledge that you could find another one in about a month or so if you were feeling lazy.  I was able to buy a house, with the seller paying the closing fees.  And of course, when you are in your young twenties and have your first three-bedroom home, you are going to need some Christmas lights.  That was the only year that I didn’t have to repair those lights.  Since then, I’ve kept the four strands working.

“How are they still working?” he asked as I put the first staple in, next to a red bulb that was pretty faded.

“Well,” I explained.  “When you become a father, your body goes through changes. Some of those changes you don’t understand.  They are confusing.  For example, I can now open any jar in the world.  I don’t know how that happens but it does.”

“There’s more, too,” I said.  “For example, I give excellent advice now about things I have no idea about.  For some reason, I know how to sniff out a good interest rate and what our thermostat is always set at.  It’s amazing really.  You’ll have the same experience, son.”

“That’s not how that works,” he said.

Ah, the ignorance of youth.  We have to teach them the ways of dad early on. Otherwise, things fester so you have to nip it in the bud and kill two birds with one bush.  Or something like that.  I got off the ladder, and moved a bit further down, taking care of my lights.

“It is how it works.  And that’s just the tip of the iceberg.  There’s tons more.  For example, I look fabulous in a sweater now.  Even I didn’t see that one coming.  But only the bigger sweaters that button in the middle.”

“Your dad sweater?” he asked as one eyebrow went up.  Small man is trying to show his doubt in my dad magic.

“That’s the one.  And then, sometimes, when you and your siblings are asleep, I take your mother in the bedroom and calculate the proper amount of weed killer I’ll need for the lawn in the summer.  It’s amazing, really.  Truly a wonder of nature.”

He hands me the next set of lights.  They are the kind of outdoor lights that have big bulbs in multiple colors.  Reds, greens, and blues have faded over the last nineteen years so a lot of them are just white now.  Some aren’t.  Those are the ones I’ve had to replace, which is easy enough to do.  You can never have a burned-out lightbulb on your outdoor Christmas lights.  I don’t know why, but as a father, it just feels off.

“Ok, seriously, how have these lights lasted that long.  Our tree lights crap out every couple of years.  Why do these keep working?”

“They work because they work.  Because I’m dad.  Doubting dad is bad karma.”

The second string of lights goes up easily.  I make sure none of the staples go through the actual cord as I tack them up on the house.  They sit perfectly in line without me having to use a level.  I have done this the same way for so long that putting up these specific Christmas lights feels like part of me; of my personality.  They are enduring.

By the third string, my son asks another question.  “Have they ever broken?” he said.

“Oh, there have been times when I thought that was the end of them.  But I replaced the fuses and they just keep going.  Year after year.  I’m telling you, it’s dad magic.  Did you also know that I can multiply fractions in my head now?  Seriously, give me a fraction and I’ll do it.”

“Easy, the answer is go get me another row of staples from my toolbox.  See, amazing.”

He shakes his head at my joke.

Dad magic.  That’s what has kept these lights working for so long.  He doesn’t need to believe in it to make it true.  It is true.  I know why the lights don’t go out.

Because when I bought them, before he was born, I had my first home.  I bought the home because I knew I wanted enough room for my future kids.  I wanted a yard that they could play on.  I wanted a place that they could call home.  And then I worked for it.  I took care of it because that’s what dad’s do.  We find a way to make things work and we give care to those that need it.  The lights are only a reflection of that.  When I look at my son, at all my children, I see more.  I see what I hoped to have all those years ago and that explains why I’m careful now.  The lights keep working because I put them away properly every year.  I replace bulbs and fuses.  I make sure that every Christmas they are on the house so that my kids can walk outside at night and know that Christmas is coming to their home.

See, I wasn’t lying or telling a joke.  Things change when you become a father.  You become more careful.  You find strength that you didn’t realize you had.  You become more than what you were.  Keeping the lights working is easy compared to some of the other stuff I have to do like multiplying fractions in my head.

The lights work because I’m their dad.