Some consider it a chance to save the planet from solar radiation, but others warn of unforeseeable consequences. 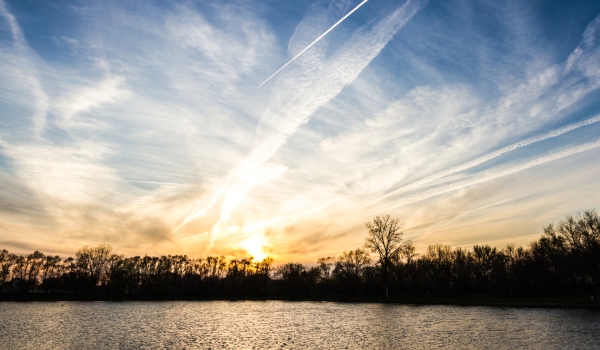 —
By Roddy Scheer and Doug Moss

Dear EarthTalk: Is the plan to sprinkle dust in the stratosphere to reflect some of the sun’s rays away from Earth to prevent global warming science or science fiction?
—M. Jackson, Tampa, FL

Some certainly do consider it science fiction, or worry that it could end up doing more environmental harm than good. Yet others—including Bill Gates and a team of leading Harvard scientists—think it could be the solution to our planetary climate woes.

What we’re talking about is a form of geo-engineering that entails sending up some 800 jumbo planes to sprinkle their payload of millions of tons of chalk dust in the stratosphere 12 miles above the Earth’s surface in an effort to reflect some of the sun’s heat back into space to turn the tide on climate change.

The so-called Stratospheric Controlled Perturbation Experiment (SCoPEx) was developed by chemist James Anderson and physicist David Keith, both of Harvard—with funding from Bill Gates—“to advance understanding of stratospheric aerosols that could be relevant to solar geoengineering.” The researchers want to test their hypothesis with a $3 million experiment 12 miles above the Southwestern United States where they would steer remote controlled balloons to disperse small plumes of calcium carbonate.

The balloons would then turn around and observe any differences in the amount of solar radiation getting through. This system is adapted from a similar design the researchers used in groundbreaking research analyzing the composition of the stratospheric ozone layer.

But the test plan, initially slated for early 2019, has received some pushback from scientists and environmentalists, who worry that such tinkering could cause negative chain reactions and unforeseen irreversible consequences.

“Some researchers have suggested that solar geoengineering could alter precipitation patterns and even lead to more droughts in some regions,” reports Jeff Tollefson on Nature.com. “Others warn that one of the possible benefits of solar geoengineering—maintaining crop yields by protecting them from heat stress—might not come to pass.” He cites a 2018 study showing that yields of wheat, corn, rice and soy fell after two major volcanic eruptions darkened skies around the planet and took a toll on crop yields.

Given such concerns, Anderson and Keith are erring on the side of caution, setting up an external advisory committee to review the project and point out potential safety concerns to head off negative side effects. “Getting it done right is far more important than getting it done quickly,” says Peter Frumhoff of the Union of Concerned Scientists.

If they can pull off a successful test and then scale the idea, the good news is it might even be something the governments of the world—and/or some rich benefactors—can afford. An October 2018 report from the Intergovernmental Panel on Climate Change found that dispersing enough sulfur in the stratosphere with a similar (cooling) intent could be done for less than $10 billion/year—and possibly for as little as $1 billion/year. While that might seem like a lot, it’s a bargain if it can save our environment, our civilization, and our very existence on the planet.

Previously published on earthtalk.org and is republished here under permission.
—